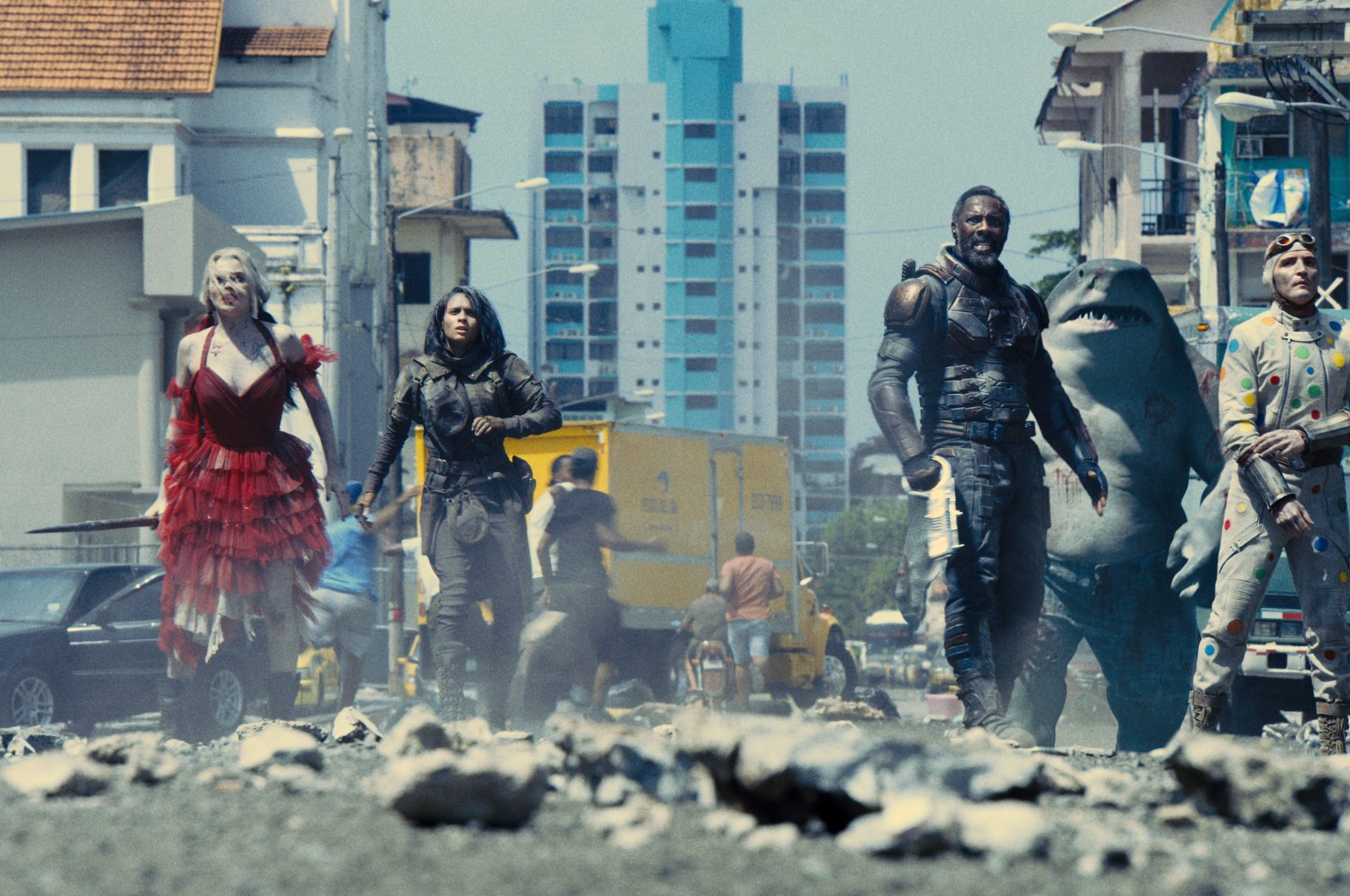 Just five years after the trainwreck that prompted Warner Bros. to retool its DC Comics universe, James Gunn’s nearly wholesale re-do exists in an entirely different movie galaxy. “The Suicide Squad” may go down as one of the greatest, and quickest, do-overs in blockbusterdom.

Like Gunn’s two “Guardians of the Galaxy” movies, “The Suicide Squad” is a chaotic, freewheeling inversion of much of what’s expected in a comic book movie. Here, heroes die (a lot of them). Most aren’t really heroes, either. Some aren’t even human. But they’ve been sprung from prison for a kamikaze mission on behalf of the U.S. government. In this motliest of crews, no one has anything like a sleek shield or a clean caped suit.

Gunn came to “The Suicide Squad," which opens Aug. 5 in theaters and on HBO Max, in a brief window opened by social-media scandal. Disney fired him from Marvel for some old, dug-up tweets, only to, after the protests of his “Guardians” cast, be rehired to direct “Guardians of the Galaxy Vol. 3.” But in the interim, Warner and D.C. poached the writer-director, one of the few filmmakers in the genre with the nerve and talent to not exactly buck the system but deconstruct it, and turn superhero myth into a slapstick farce.

Gunn has said he was initially offered the chance to direct a Superman movie, but it’s telling that he turned down the crown jewel of DC for the likes of Polka-Dot Man, Ratcatcher 2 (who communicates with rodents) and Nanaue, a cartoonish walking shark in jams.

But if most mainline superhero movies ultimately exalt American ideals like justice, individualism and might, Gunn goes exactly the other way. “The Suicide Squad” is the anti-Superman, a madcap rejoinder to Captain America. In Gunn’s hands, the American superhero is grotesque, brutal and ridiculous. Like Gunn’s previous movies, “The Suicide Squad” boasts wall-to-wall needle drops (the Pixies’ “Hey,” Louis Armstrong’s “I Ain’t Got Nobody”), yet leaves out maybe the most fitting song, Childish Gambino’s “This Is America.”

Early on in “The Suicide Squad” we get a sense that the mission is dubious. Amanda Waller (Viola Davis) summons a bunch of prisoners for Task Force X program. Exactly who are to be our main characters and who’s head is about to sliced like a melon takes some sorting out. But in a clown-car of a superhero movie the most central protagonist is Idris Elba’s Bloodsport, a mercenary only coaxed into joining the team when Waller threatens prison time or worse for his teenage daughter (Storm Reid, very good).

With him are Ratcatcher 2 (Daniela Melchior, a standout), a laconic, warm-hearted Millennial with a very polite pet rat named Sebastian on her shoulder. The skills of Polka-Dot Man (David Dastmalchian) are initially hard to decipher, but the shy, stunted Abner proves surprisingly capable, even if he, himself, sheepishly apologizes for having such a “flamboyant” power.

There is also John Cena’s Peacemaker, easily the most jingoist of the bunch, a kind of Captain America knockoff. Just what each squad member feels about their home country and its role in international backwaters is prominently in play in “The Suicide Squad." The gang is sent to a dictator-controlled South American island in the midst of a populist uprising to keep safe a secret, locked-away alien species housed in a concrete tower. This is the sinister unseen side to American glory; a monstrous extraterrestrial starfish picked up on a seemingly triumphant space mission. Unclear is whether the task force is there to prevent an apocalyptic threat or shroud a dubious offshore U.S. experiment.

But there are others, too. Nanaue (voiced with monosyllabic perfection by Sylvester Stallone) is a worthy heir to Groot from “Guardians of the Galaxy” and a man-eating reminder to how very close to cartoon Gunn’s movie is. The group’s more serious, highly trained field leader, Joel Kinnaman as Rick Flag, is a kind of straight man to the antic gang in the same way that dramatic, ballad-singing actors starred alongside the Marx brothers.

Also in the mix is Margot Robbie’s Harley Quinn. It’s her third film in that character but the best yet in capturing Quinn’s chipper mania. A brief romantic interest tells her he adores her for symbolizing anti-American fervor. Within minutes, he’s lying dead on the floor.

Does “The Suicide Squad” overdo it? Of course. It’s a little absurd to even ask that about a movie with a talking shark that rips bodies in half and interstitial debates about, for instance, whether the phrase “tighty whities” is racist. Gunn throws so much into his superhero collider that he sometimes sacrifices depth (backstories are poignant but thin) for wit and idiosyncrasy.

But as over-the-top and thoroughly R-rated as “The Suicide Squad” is, it’s not nihilistic. That’s maybe a questionable argument to make for a film that includes an inside-the-body close-up of a dagger piercing a beating heart. But as much as Gunn steers his movies into chaos, they have a surprising amount of heart and thoughtfulness to them.

Within “The Suicide Squad” is not only a negotiation with American power, and its depiction in comic-book movies, but a heartfelt if extreme gallery of damaged souls. It's a kind of genuinely tender freak show. The upside of selecting DC characters from the Z-list is that Gunn has free reign in molding and shaping them as he likes. And, as in “Guardians,” his heroes all derive their strange powers from emotional trauma. They are outcasts, weirdos, laughing stocks and whatever you call Nanaue. That makes “The Suicide Squad” – as ridiculous as it is to say about a movie that renders a bloody rampage with gushes of animated daisies and birdies – kind of beautiful. Plus, the shark in jams is funny.