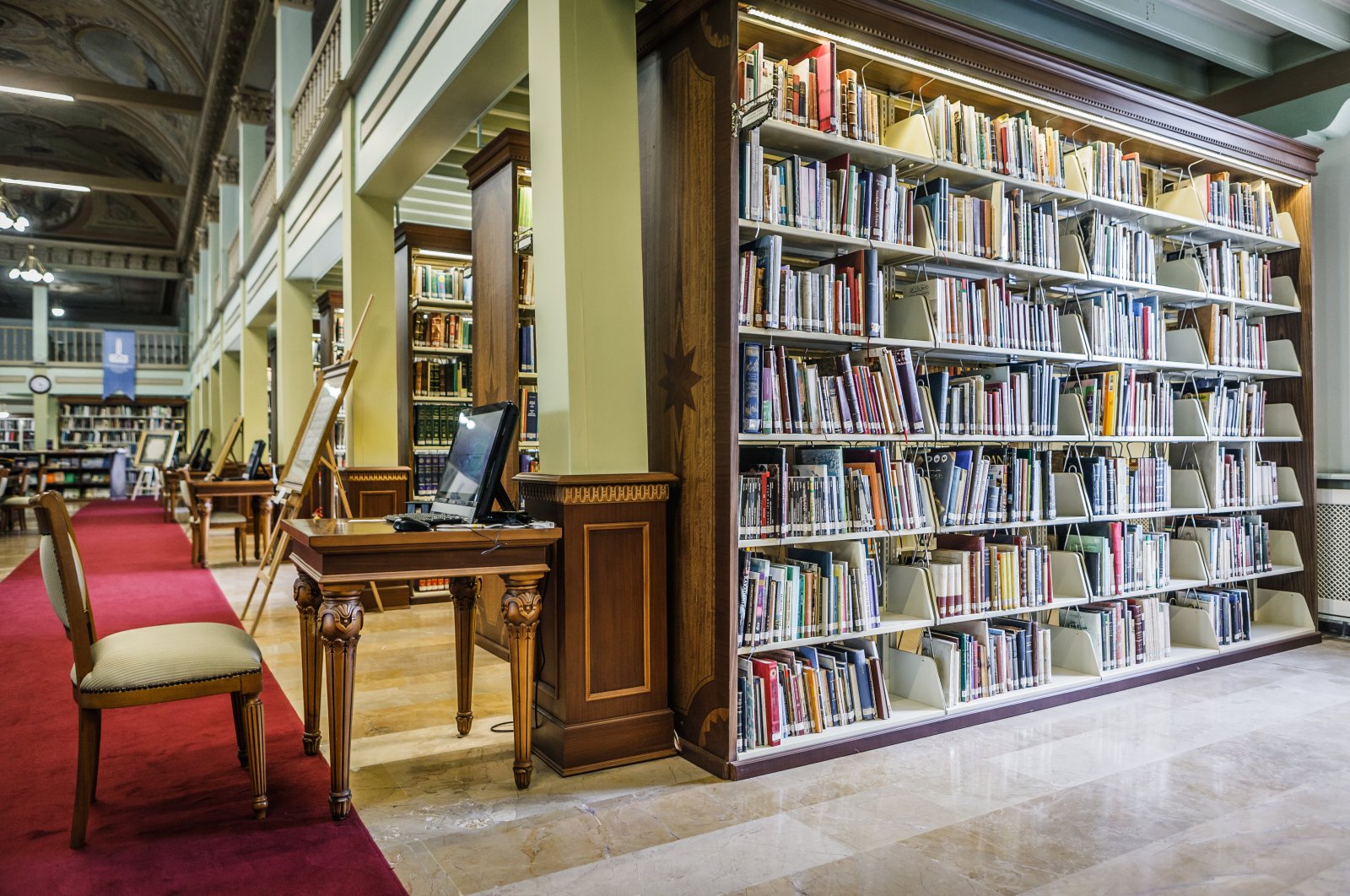 IRCICA's Farabi Digital Library is among the few libraries that have optical character recognition (OCR) technology in Turkey. (Photo by RECAI KÖMÜR)
by DAILY SABAH WITH AA Apr 02, 2021 12:46 pm

If you are a bibliophile and are looking for opportunities to discover more books during the pandemic, it is high time to discover the nation's libraries serving researchers and readers who do not want to enter crowded indoor environments due to COVID-19

Libraries are maybe one of the most beneficial inventions in human history with their curated collection of sources and information. They are best described in the words of the American author Ray Bradbury: “Without libraries what have we? We have no past and no future.”

The perception of libraries kept pace with the times and went through a number of changes after technological developments took more of a place in human life. As the internet became a significant element in our lives, libraries also benefitted from the facilities it provides. Moving their resources to the digital environment, they provide better access to many users from around the world in an instant.

Digital libraries paved the way for reaching the desired information at any time. Besides, all that is required to access the numerous resources in digital libraries, ranging from novels to periodicals, newspapers and magazines to manuscripts, maps to paintings, is just an internet connection and membership.

Digital libraries have become even more important during the COVID-19 pandemic, as researchers and readers were able to access a myriad of resources at all hours of the day during this challenging period which confined people to their homes.

Many libraries in Turkey, as in the whole world, also extended their services beyond the physical walls of a building, providing access to their materials remotely during the pandemic. As a hub of civilizations throughout history, Turkey is a haven for bookworms who can explore millions of literary works. As the country’s rich sources and archives are just a click away now, let’s look at prominent digital Turkish libraries together.

The e-book archive of the public libraries offers approximately 17,000 books from the collections of these libraries, which are affiliated with the Ministry of Culture and Tourism, to readers.

In order to access a wide archive of new works to classics, it is necessary to become a member of the online library. Readers can access the e-book archive of the public libraries for free.

The Farabi Digital Library, owned by the Research Centre For Islamic History, Art and Culture (IRCICA) in Istanbul's Fatih district, is among the few libraries that have optical character recognition (OCR) technology that enables users to find in-text searches for works in all languages.

As Ottoman Turkish could not be analyzed with the existing OCR systems in the world, IRCICA enabled the use of this technology in Ottoman texts with the software it developed in 2011.

In the digital library, nearly 2 million scanned Ottoman digital pages and images – such as Ottoman state, province and institution yearbooks; Ottoman chronicles; the entire collection of the Takvim-i Vekayi, the first fully Turkish language newspaper, and travel books – can be accessed.

In addition to Ottoman Turkish, the library offers an opportunity to search for words or phrases in other languages as well as full-page translation and reading in these languages at the same time. In the Farabi Digital Library, users can create their own digital collections. The audio reading and translation of the work in the desired language can be made instantly.

The library is actively used by researchers in 75 countries, including Turkey, the U.S., Germany, Greece, Iran, Britain, Egypt, Saudi Arabia, France and Iraq.

The digital library of the Center for Islamic Studies (ISAM) in Istanbul's Üsküdar district is one of the best libraries in the field of social sciences. In the library, which allows access to resources without the need for membership, Ottoman articles, yearbooks, ulama (Muslim scholar) registry files and kadı (judge) registers draw attention.

In the database of digital libraries, there is an archive of Turkish history, literature, culture and art articles, as well as articles in the field of theology published by various publishing houses and institutions, especially the journals published by the faculties of theology, and the papers presented in symposiums and congresses.

Istanbul's Sakıp Sabancı Museum’s “digitalSSM,” one of the most important studies initiated under the 10-year project of the museum, is a pioneering work in which the entire collection and archives of a museum in Turkey are transferred to the digital environment.

Within the scope of the project, all information about the book arts and calligraphy collection, painting collection, Abidin Dino Archive and Emirgan Archive of the museum are available on the "digitalSSM" website, accompanied by more than 77,000 high-resolution images.

The Istanbul University (IU) Library and Documentation Department also digitizes some of the works in its collection within the scope of various projects and offers them to readers and researchers.

In this context, precious maps – in addition to Sultan Abdulhamid II's "Yıldız Photography Collection,” which are preserved in the Rare Works Library of the university – 18,422 Ottoman Turkish, Bulgarian, French, German, English and Turkish newspapers and the works of Sultan Suleiman I are presented to readers through virtual library technology.

Rare works such as "Divan-ı Muhibbi," a collection of poems by Sultan Suleiman I, who wrote under the pen name "Muhibbi,” meaning amicable and lover in Ottoman Turkish; the Ottoman poet, calligraphist, teacher and painter Matrakçı Nasuh’s "Beyan-ı Menazil-i Sefer-i Irakeyn," which tells about the first Iran expedition between the years 1533-1536 during the reign of Sultan Suleiman I (1520-1566), and "Kitab-ı Bahriye" ("Book of Navigation") by Ottoman geographer, navigator and cartographer Piri Reis, the only copies of which are found in the Library of Rare Works of Istanbul University, are available on a specially prepared website.

Besides, 78 recordings of the Darülelhan (The Istanbul University State Conservatory) can be listened to on another website of the university, prepared with the cooperation with the IU Library and Documentation Department and the Ottoman Period Music Application Research Center (OMAR), with the support of the Ministry of Culture and Tourism and the IU Rectorate.

SALT Research offers its library comprising visual practices, environment, social life and economic history, as well as its archive of physical and digital documents and resources, to users on its website.

SALT, which is a cultural institution that conducts public programs such as researches, exhibitions, publications, web and digitization projects, conversations, conferences and workshops in Istanbul and the capital Ankara, does not adhere to a specific period, discipline or object-based production, and it aims to provide an open ground for discussion.

A recent online digital library project, WikiLala, which aims to gather and digitize all the printed texts from the Ottoman Empire since the introduction of the printing press, has been shedding new light on the empire's history and culture. Thousands of books, magazines, journals, newspapers and various other manuscripts and documents have been digitized from Ottoman Turkish works.

Researchers can search through the documents easily and quickly using the system's search engine, which can be used with Arabic and Latin letters thanks to the OCR technique used in the scans.

Istanbul’s Beyazıt State Library, which was the first national library opened by the state during the late Ottoman era, will soon digitize its rich resources. A 1934 law on compiling printed texts and pictures issued on the order of Turkey's founding father Mustafa Kemal Atatürk required one copy of all published materials in the country to be housed in this library. This is why the library has a vast collection of work, including Ottoman periodicals, newspapers and magazines. The library registered its 1.2 millionth book to its archive recently.