‘A Story of Look’: 4 exhibitions from Institut français Ankara 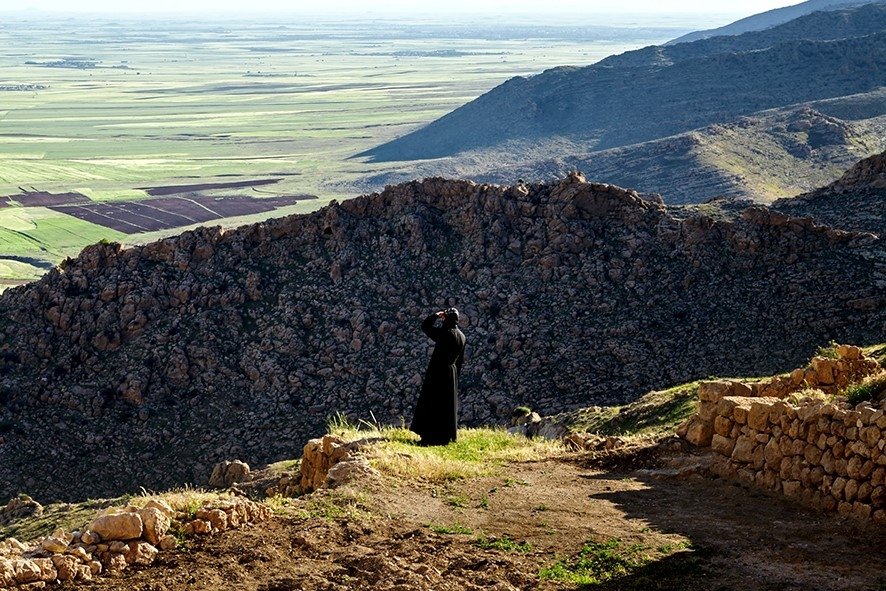 A photo by Saima Altunkaya from her "Tur Abdin, Mountain of Slaves" exhibition. (Courtesy of Institut français)
by DAILY SABAH May 26, 2021 12:29 pm

Initially displaying a diverse portrayal of mothers, "A Story of Look" presents various journeys from different places of the world, including France,  Iran, Afghanistan, Azerbaijan and Tur Abdin

Institut français Ankara is preparing to present a new group exhibition bringing four famous photographers, all of whom have achieved worldwide success, together. “A Story of Look” will meet visitors at the Çankaya Municipality Doğan Taşdelen Contemporary Arts Center in the capital Ankara on May 28 and will be on display for a month. The show will feature works by photographers Lam Duc Hien, Ferrante Ferranti, Ahmet Sel and Saima Altunkaya.

Born on the shores of the Mekong in 1966, French-Laotian photographer Hien was exiled with his family in his childhood. After two years in a refugee camp, he arrived in France, where he would start his journey in art, in 1977. Following his study in plastic arts, the artist started to take photos all over the world in a sensitive manner devoted to social events as part of his personal projects and the requests of the press or nongovernmental organizations.

He bore witness to the effects of the major wars of the century on civilian populations in Romania, Russia, Bosnia, Chechnya, Rwanda, South Sudan and especially in Iraq. Taking responsibility for the conservation of natural resources, he documented the effects of today's transformation on the nature of the Mekong and Niger rivers.

His works, which are regularly published in the press, have also been published in books and displayed in exhibitions. The artist won many awards, including the Leica Prize, the Grand Prix Images Vevey and the prestigious Word Press Photo award for his portraits of "Iraqi People."

Hien’s works restore dignity to men and women whom he refuses to define on a negative basis. He reflects their homeless, broken, unsafe and muted faces, bodies and movements in his photos without ever seizing them. On the contrary, the artist presents these women and men in the richness of their own existence and as the subject of their own orientation. He, through his lens, states that even continuing to live is an act of resistance in itself.

He takes photographs from the human level, that is, he portrays people, especially women, children and mothers. The artist participates in Institut français Ankara’s latest exhibition “A Story of Look” with his series titled “Mere, Meres” (“Mother, Mothers”). In this series, he captures thoughts that often go unseen or are forgotten easily by people. His eye-opening works remind us that every look is political, and it is only up to us to open our eyes. Each of his photographs inspires a dialogue with those who often go unheard, are confined to a crackling sound on the radio or images passing in front of our bored eyes. They take us out of our numbness without ever blaming us. This journey we take in Hien's gaze does not make us feel guilty, on the contrary, it makes us feel conscious.

Born in 1960 to a Sardinian mother and a Sicilian father, Ferrante Ferranti lives in Paris. Fascinated by Fernand Pouillon's book “Les Pierres Sauvages” (“The Stones of the Abbey”), Ferranti began his architectural education in Toulouse and received his diploma in theaters and scenography during the Baroque period in 1985. He took his first photo named “Wave in Belle-Ile-en-Mer” at the age of 18.

After this very first shot, photography became a passion for Ferranti, and the artist combined this passion with his journeys. Beginning his exploratory journeys in 1980 at the age of 20, he first went to Sicily, the "Land of The Sun,” and then to Greece in pursuit of his roots. When he developed an interest in Islamic art on a trip to Egypt in 1981, he decided to take photos of every country he visited. In the same year, he came to Turkey, dreaming of photographing the Dardanelles, Golden Horn and Pamukkale. He admired the minarets built by Ottoman architect Mimar Sinan, Topkapı Palace, the caravanserai domes and Cappadocia's frescoes.

His journeys continued in Iran, Afghanistan, Azerbaijan, Georgia, Uzbekistan and finally ended in 2008 in Algeria, the country where he was born. The exhibition “Journey,” with which he takes part in “A Story of Look,” is the story of this 40-year adventure.

Ferranti, who has traveled to every Mediterranean country, visits Turkey every year. He compiled elements of his travels in a book called “Journey to Ancient Turkey” with archaeologist Jacques des Courtils as a homage to unique but little-known world heritage.

‘Faces of Turkey in France’

Photographer Ahmet Sel, who continues his work in the field of portrait and documentary photography, was a senior reporter cameraman at La Cinq television channel after his higher education in France. Serving as the correspondent of La Cinq and Arte and the bureau chief of the Sipa Press Agency in Moscow between 1990-2000, he returned to Paris and worked as the editor-in-chief of the Sipa Press Agency. Then he worked as Anadolu Agency's (AA) visual news editorial director between 2012-2019.

The photographer won the "Fujifilm Press Photo Awards France" in the portrait category in 2003 and the "National Magazine Awards Foundation" in the field of photography and text in Canada in 2004.

In “A Story of Look,” Sel’s works portraying Turkish migrants in France will be on display. The artist realized this series titled “Faces of Turkey in France” with the support of the French Office for Immigration and Integration (OFII). In a statement, Sel told about the people he reflected through his lens in “Faces of Turkey in France”: “They went to France in the '70s. Some by legal means, some as fake tourists or illegal people ... They crossed Europe for a new and better life. They said let's save some money, we'll be back. Ultimately, a house, a tractor, a car money ... Then again their homeland. But it wasn't that easy. Years passed, the vast majority of immigrants remained in France. Today they are naturally a part of both Turkey and France.”

Saima Altunkaya is a German-Syriac photographer who lives and works in Paris. At the beginning of her career, she introduced herself as a photographer for fashion magazines and advertising campaigns. She received an award at the International Fashion Photography Festival held in Cannes in 2014.

In 2013, for business travel, the artist went to the land where her family was born. The Tur Abdin region, the limestone mountain range in the upper reaches of the Tigris River in the southeast of Turkey, still hosts Syriacs and has been famed since late antiquity for its Christian churches and monasteries. This journey was a life-changing spiritual awakening for the artist, and she started an intense confrontation about her origins and family background soon after. The fact that she has rediscovered and accepted her identity took her away from the beautiful appearance of fashion photography, and she started to photograph Tur Abdin.

In “A Story of Look,” Altınkaya’s photos of the region’s remaining cultural heritage and its inhabitants are presented to visitors. The photos seek to preserve the remains that have survived years of abandonment and destruction in the region. Tur Abdin’s unique natural landscape surrounded by deep valleys is displayed as rows of hills, fields cultivated in the form of terraces, walls surrounding old pastures and monuments that mark the horizon from the beginning of Christianity in Altınkaya’s series.