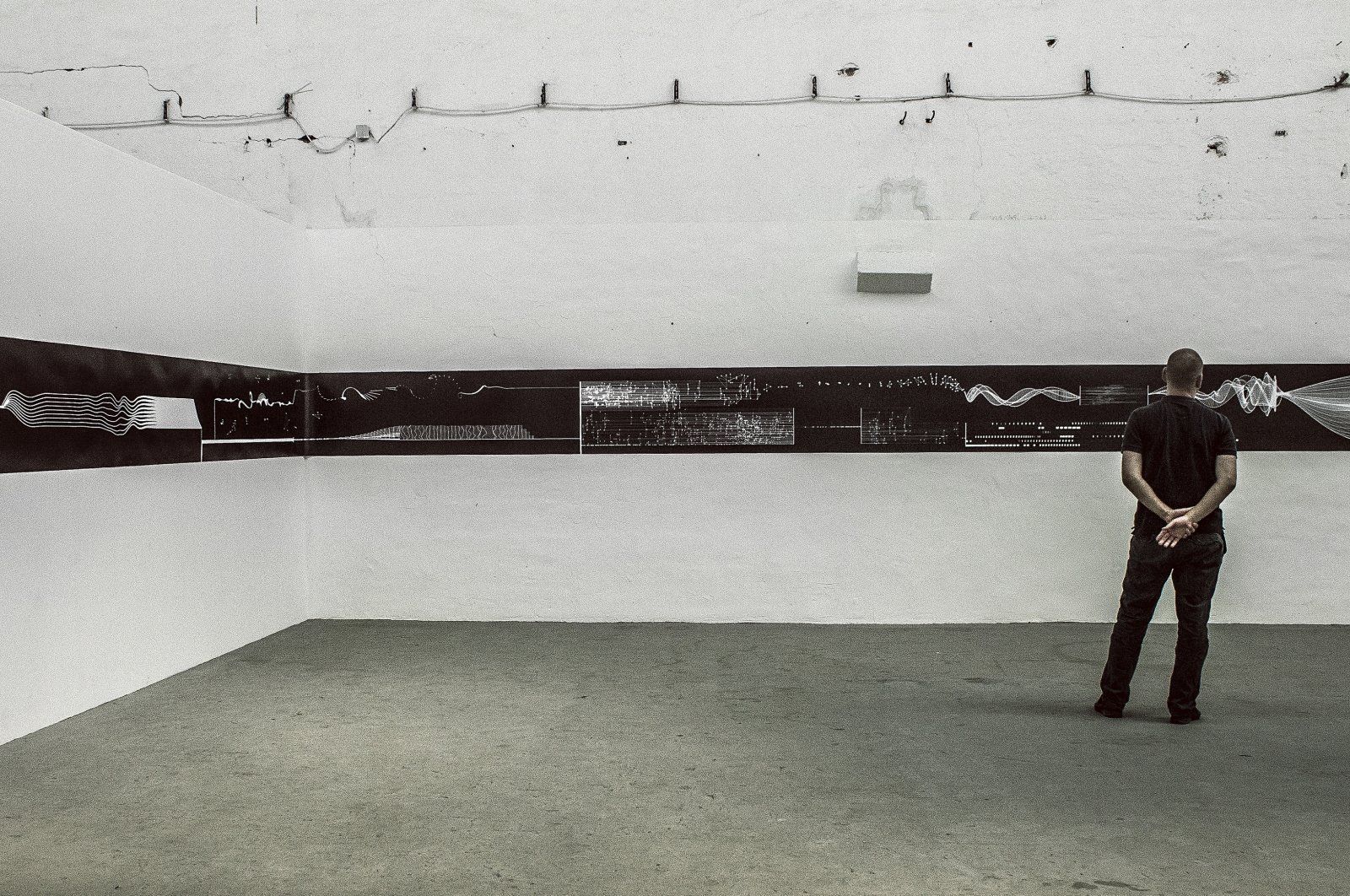 Vision Art Platform's first exhibition in its new space focuses on the relationship between architectural elements, formal connections and memory through different types of artworks that push the conventional limits

A French proverb says that a door is either open or closed. However, in 1926, artist Marcel Duchamp made an architectural intervention in his small home workshop on Larrey Street in Paris, which defies this claim. He hinged a single wooden door between the adjacent bathroom and bedroom, essentially making the door open and closed at the same time as when the door closed one room, it opened another. This creative idea, which later turned into an artwork called “Porte, 11, rue Larrey,” shows concretely how the intellectual boundaries of human beings are articulated with space, and encourages us to invent new doors, windows and passages to create room to breathe.

Similarly, Istanbul’s Vision Art Platform sets out with the courage to design crossings that go beyond the limits. The platform, born from the idea of creating a cross-disciplinary culture and art venue, begins its adventure with an exhibition that discusses the concept of space and spatialization in its many dimensions. In “No Room for a Door,” the very first exhibition in its new space in the Akaretler neighborhood, the platform focuses on the concept of “openness.” Coordinated by Leyla Ünsal, the group exhibition brings together works by Candaş Şişman, Işık Özçelik, Majid Baharan, Mert Acar, Nermin Ülker, Sevim Sancaktar and Tanzer Arığ.

The works of artists, who have very different production styles compared to one another, establish formal relations through architectural elements while conveying a sense of agony to the viewer stemming from an amnesic void, not belonging anywhere and the hope of rescuing a looted past and rebuilding sanctity. The desire to open the space to the earth and memory, rather than occupying or filling it, creates layers of meaning.

Arığ's three-dimensional shadows in “No Room for a Door” are installed in the platform space through a surface-depth relationship. These works, which are reminiscents of Duchamp's “The Bride Stripped Bare by Her Bachelors, Even,” most often called “The Large Glass,” stand between the three-dimensional physical being and its image. The graceful and fragile memory spaces produced by the artist are witnesses of the lost past. At the very first look at the works, one understands that only the black contours of the artist were left back from outdated innocence, lost childhood, dissolved ties and ideals that have lost their halo.

If you vacuum all meaning from an image, what is left? Or is it possible to produce an image completely without aura? These questions are hanged in the solitude of Acar's “Suspended Stillness Series.” Feelings of nostalgia do not accompany the feeling of loss that dominates his photographs because it is not just the past that is lost. We are on a threshold where the future is also erased. Urban spaces that are abandoned by everyone except the lights that illuminate nothing will never be a home to anyone again. Acar's photographs are the last images seen by an abandoned subject in an eternal present. And in his works, the frames are the declaration that there is no outside.

Özçelik's sculptures are like the fully illuminated, aura-filled and positive forms of the spaces photographed by Acar. The marble columns of the artist carry a utopian hope for the future, and they rise to demand the harmonious development of the natural and cultural environment. The "architecture-landscape-sculptures" she created calls out from a lost golden age. The call for integrity, balance and harmony is completed by the cooperation of the human mind with nature. And Özçelik is building temples to the future like the poet-architect of an ideal society that has not yet arrived. In her works, the archaic formal problems of the art of sculpture meet the conceptuality of contemporary art.

Like Özçelik’s sculptures featuring utopic interiors, Ülker also crates utopic surfaces and hollow frames. In her world, windows and doors are open to an impossible concept of household. The artist brings together the hardness of metal material with a form as volatile and fragile as leaves blowing in the wind, making the “home” an uneasy threshold. As surface and space, the home escapes from getting framed and perceived as a stop. The artist implies that it may be a futile effort to look for a safe room with a single door in the adventure of becoming and in the endless transformation of humans.

Ülker's sculptures share the same space with a photograph from Acar's “Absence” series in the exhibition. The window without a room that we see in this photo looks at Ülker's houses, which have no interior and are made up of frames.

Baharan participates in “No Room for a Door” with his monumental canvases, which are exhibited for the first time. He adds the language dimension to the space problem with his paintings. The artist explores the relationship between language, image and sanctity, which determine social relations in the geography of the Middle East. Baharan follows the path opened by calligraphy in the world of thought, using the script in his painting and opens gaps between words and images.

Although they are completely different in method, the works of Baharan and Şişman focus on the constituent elements of language and echo each other. Şişman's installation on the ground floor of Vision Art Platform consists of a performance of the sound composition composed with the graphic notation method. The composition is performed by different musicians in different countries. While sections from performances in various times and places are displayed on four monitors forming a cube, “SYN-Phon” establishes a formal relationship with all the other works in the exhibition. The artist opens the cube digitally, not physically this time. While homogeneous red light fills the room, the sound strip circling the space increases the concavity of the work. On the other hand, sound and light move outward in endless waves.

With the graphic notation method that she has been working on for many years, Şişman is establishing a brand-new language. She includes the musicians she works with in different geographies of the world as freely inspired composers in search of a new language or translinguistic communication. She constructs a sensory experiment involving the audience for the liberation and pluralization of forms of communication between people.

“Eyelids, two friends, two enemies” is a photographic arrangement created by Sancaktar with 35 found objects and cassettes. The incomplete compositions that Sancaktar created from these tapes, which she enlarged in size, are places of memory made up of losses. Despite its monumental size, this work, which we had a chance to see in three pieces in the exhibition, stands with the fragility brought about by a kind of impossibility. Sancaktar, who has many works on memory and archive, uses the material to reweave the webs of desire and meaning along with the time that embraces her. This is because every time the past is remembered, it always comes with losses as forgetting before remembering builds up the memory. Since losses cannot be replaced, it is necessary to open memory spaces that frame the void left by these losses and leave their mark on today. To look into the past, your eyes must be open and closed at the same time, like Duchamp's trickster door.

Spaces are surely not just physical; they have invisible dimensions that expand with memory and experience, opening up like an accordion in time. Spaces stretch or shrink, transform endlessly, depending on how many people they house and who they kick out. Perhaps that is why their volume should be measured in years, not square meters. A zoning permit cannot be given to the space left from the demolition of some places. Or some places comprise of only doors and walls, they do not open to any place. In this case, opening space is a surface work rather than an interior-exterior relationship. But who and what clings to those spaces? You can visit “No Room for a Door” to seek an answer to this question and similar other ones until Aug. 1.