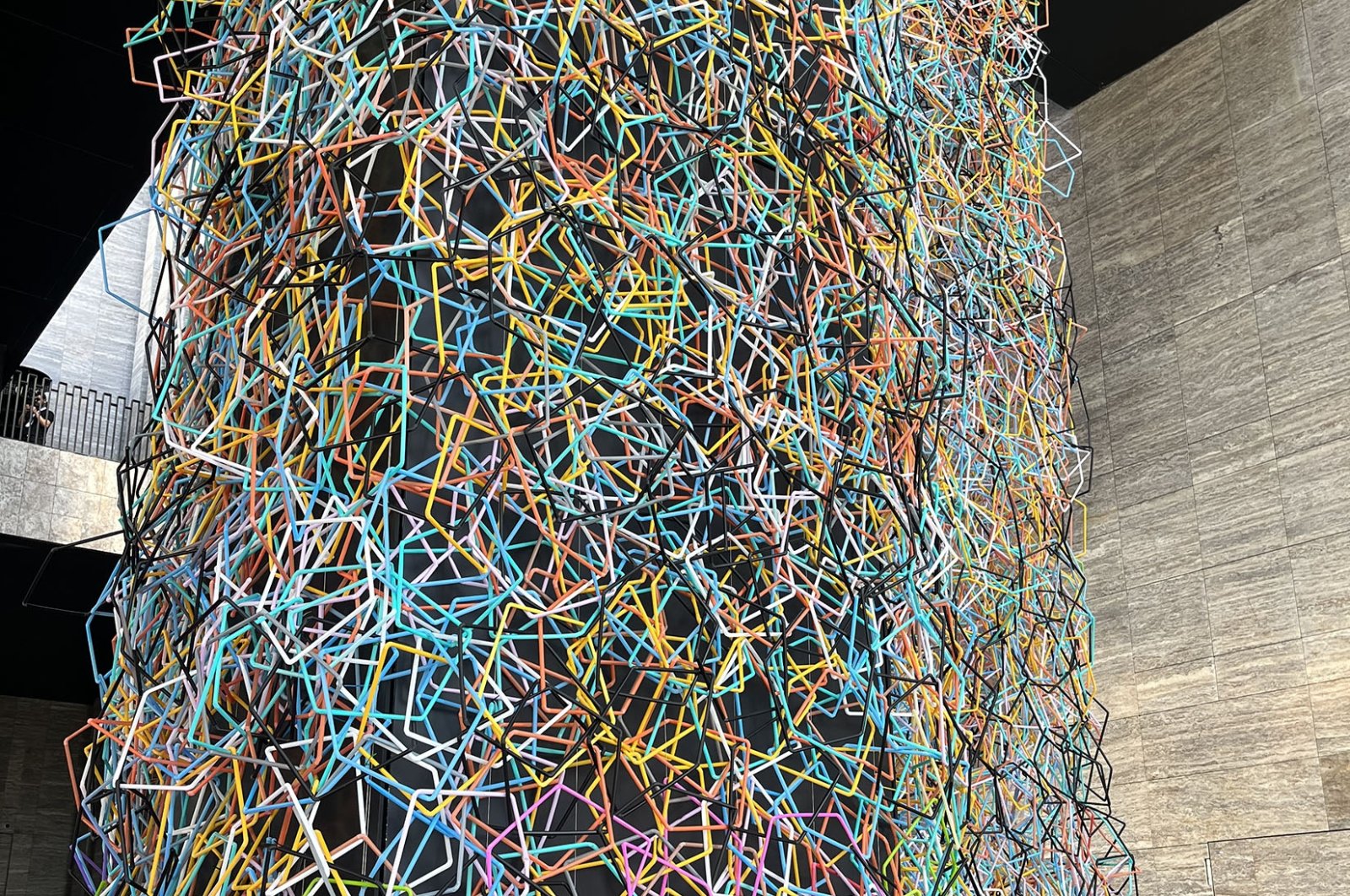 A view from "The Aesthetics of Ready Materials" by Haydar Akdağ. (Photo courtesy of Funda Karayel)
by FUNDA KARAYEL Jun 05, 2022 11:02 am

The Ministry of Culture and Tourism has been preserving and maintaining cultural heritage as a whole with its tangible and intangible efforts that are showcased to the world through the many important strategic events throughout the year. Among these events, a two-week festival was held last year in Istanbul's Beyoğlu, long the center of the city's bustling arts scene.

Celebrating the arrival of summer and art, the Beyoğlu Culture Road Festival draws attention to the cultural, architectural and historical heritage, aiming to introduce different cultural experiences this year. I am very impressed by the outstanding quality of the presentations at the second edition of the festival this year. The artwork on view engages viewers in solidifying the magnificence of the festival’s venues. Let’s take a closer look at the highlights of the displays showcased at Istanbul’s iconic Atatürk Cultural Center (AKM) as part of the Beyoğlu Culture Road Festival.

The "Rumi" digital installation by Refik Anadol, inspired by Mevlana Jalaluddin Rumi, can be visited at the AKM Theater Hall - Foyer throughout the festival. Anadol is honored to create a poetic, immersive, and multisensory artwork to commemorate the 750th death anniversary of one of the greatest poets and philosophers in human history. Inspired by Rumi’s multilayered philosophical lens through which he interpreted life and the universe, “Rumi Dreams” is an AI-based spectacle of light and motion that animates a vast dataset of precious Rumi archives. This dataset, collected with the generous help of Konya Metropolitan Municipality, includes scripts of Rumi’s “Masnavi” in 19 different languages, more than 180,000 images of dervish lodges, ancient book pages and documents, and recordings of Sufi music and performances.

Anadol and his team process this interdisciplinary dataset that is emblematic of Rumi’s worldview through machine learning algorithms. The resulting data universe becomes the building blocks of machine-generated “Rumi Dreams,” a unique perspective from which to view Rumi’s poetic universe on an unprecedented scale. Generating a multisensory dynamic performance, “Rumi Dreams” is a mesmerizing artistic expression of the convergence between the meaning of light, knowledge and movement, encouraging viewers to find the light that lights the world. Anadol’s work will be open to the public for free until June 12.

The “The Youth Are On the Road” exhibition likens the youth’s long quest in the history of humanity to a journey and opens up a space for representation in our time. Curators Nazlı Pektaş and Ayça Okay did a remarkable job by putting together this impressive event in such a short time. “The Youth Are On the Road” is held at a large space extending to the pool and pedestrian walk at the front of AKM building, the road connecting the cultural center, the open spaces and the stairs. The artwork displayed at the exhibition were produced by young artists between 2018 and 2020. Some of the artwork had previously been displayed in other exhibitions but some make their debut with this exhibition.

Büşra Çeğil’s “A Family Portrait” (2022), displayed within the body of “The Youth Are On the Road” exhibition, is viewed as an installation highlighting the concepts of childhood, youth, family and belonging. This installation, which was designed as a family dinner, reminds us of the time spent by healing the wounds inflicted on us by our parents, and the conversations that we have and continue to have at the same table together after we bandage our wounds. Focusing on family and forms of bonding, the installation reflects the form that the artist often uses as a metaphor in her practice with a different material displaying the state of melting, disappearing and continuing to be in a fluid transformation.

There are only a few creatures that have a similar staggering effect on the preservation of the natural balance in the oceans as whales. The last thing these graceful giants need as they grapple with dangers such as plastics in the ocean and noise pollution is the endless struggle with hunters’ trammel nets.

The consumption frenzy caused by the increase in population in the world brings reckless hunting with it. In the artwork of Caner Kaya, “The Sound of The Ocean,” put on display as part of “The Youth Are On the Road,” the viewers are expected to associate the effect of pain, which is the last emotion these living creatures experience when their lives are brutally taken from them, with the gaps in the composition. While the gaps in the artwork depict the irrecoverable losses, the form itself depicts the struggle fueled by protection instinct for the lives left behind.

The reason why this structure was formed with unit elements is to highlight the permanent structure and urge the viewers to be unifying rather than disintegrative. Mint green, which forms the color of the artwork, represents the peace in the natural habitats of whales. The continuity of peace is only possible as long as these areas are not interfered with

Another installation by Haydar Akdağ, “The Aesthetics of Ready Materials,” questions and reevaluates the objects consumed in daily life by changing their usage areas in macro and micro terms. While the artist interprets the materials he uses in his installation in an abstract, dysfunctional, geometric, or organic form given the possibilities they provide; he incorporates certain mass production with industry standards into a nonrepetitive production process. Here, the questioning of the ready material is the idea of reminding the viewers of its singular value in a whole and the value of the new position it has taken while forming the whole.