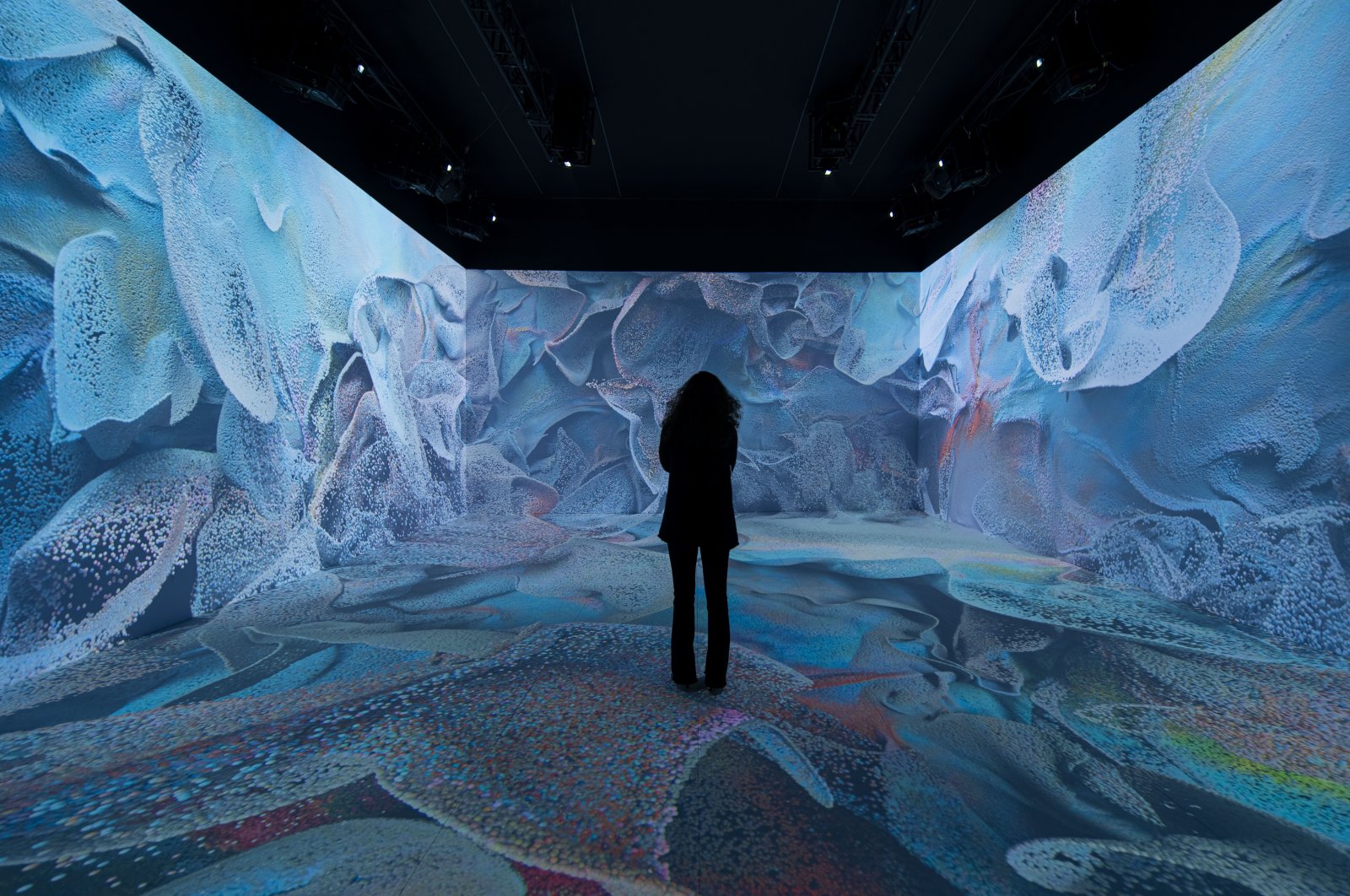 Discover the mesmerizing Istanbul exhibition of Refik Anadol by learning about the history of the media arts and diving into the machine-based visual speculations of the famed artist, respectively

Astrophysicist Carl Sagan once said, “Imagination will often carry us to worlds that never were. But without it, we go nowhere” in an episode of his TV show "Cosmos" in 1980. Some 40 years after this statement, media artist Refik Anadol draws attention to the inevitability of imagining by creating poetic metaphors with unseen space data for the sake of public art in his “Machine Memoirs: Space” in Istanbul’s Pilevneli Gallery. Let’s discover Anadol’s imaginative world that was reflected in this exhibition and captured the attention of Istanbulites by also getting the lowdown on media arts.

The media arts are described through many diverse approaches in the literature. Some describe the media arts through the technology that is used to create them whereas some focus on the functions of the artwork. In a simple, general description, media arts may refer to the artwork depending on a technological component to function.

Actually, media artists were devoted to developing their artistic practices rather than determining features of the media arts from the very beginning. As new technologies emerged in the world, the progress they brought with them transformed society. This transformative impact also touched on the field of art, and artists began using photography, film, video, computers, the internet and more in pioneering ways. Even if the first experimental use of audiovisual technologies in art dates back to the 19th century, media arts were created in different ways in diverse historical periods.

Technological advancement was of course an essential factor in the development of media arts but it should not be forgotten that avant-garde had also been a previous accelerator for them in the 1960s as this art movement sought new, experimental, unorthodox ways of creating art pushing the boundaries of what is accepted as "norms." Media arts constantly expanded throughout the 21st century, and artists rapidly benefited from all new technologies in their creations.

The awareness of media arts in Turkey started in the second half of the '90s when the internet was introduced to the country and visual communication design (VCD) departments were launched at some universities. The VCD department of Istanbul’s Bilgi University was one of the pioneers in this field and its annual student exhibitions were where the foundation of the media scene was laid.

In 2009, the arts and cultural complex Santralistanbul, situated within the campus of Bilgi University, opened an exhibition with the contribution of ZKM Center for Art and Media Karlsruhe, a prominent cultural institution in Europe. The students and academicians of the Bilgi University VCD Department contributed a lot to the research, design and installation processes of "Uncharted: User Frames in Media Arts," which showed an experimental selection of contemporary art involving the large-scale use of digital and interactive media.

When he was a student of this department who started to create his own artistic language through photography, moving images and mapping, Anadol participated in this exhibition with his “Quadrature,” which made an overwhelming impression, especially after its video went viral on the internet. Anadol was one of the young generation artists who started to produce works in media arts in Turkey in the 2000s and prepared this projection show realized on the front facade of Santralistanbul with Alican Aktürk. This very first work of the artist actually pointed to his future successes in the media arts.

Continuing to create works about various subjects’ reactions to spatial entities like “Quadrature” in his later oeuvre, Anadol has become an international artist to whom large-size works are commissioned. Using data and machine intelligence as his medium and embedding arts into architecture, the artist questions the future of digital architecture, visualizes alternative realities and redefines the functionalities of interior and exterior spaces. As he shows that all spaces and facades can be used as the artist’s canvas, his works and exhibitions are always the center of interest with the unique, rare and authentic experiences that they present to their visitors.

This is why his latest exhibition at Istanbul’s Pilevneli Gallery has seen long lines of visitors. “Machine Memoirs: Space” is Anadol’s third exhibition under Pilevneli's roof. The artist’s first gallery exhibition “Sceptical Interventions” was also presented in this gallery in 2012.

With technological advances, the symbiotic between human life and science changes, evoking intriguing discussions about successful human-machine teams. As a media artist interested in data and machine learning, Anadol has been contemplating the relationship between humans and machines for a long time. In his last show, he sees artificial intelligence as a collaborator rather than a mere tool and turns the spotlight to machines providing the vast photographic archives that document the history of space exploration.

While challenging our conventional understanding of the cosmos, human senses, machines and the mind, the exhibition walks the visitors through simulations of how artificial intelligence generates novel experiences to be perceived collectively. Along with the novel experiences it offers, “Machine Memoirs: Space” managed to touch on the soul and mind of the visitors, taking them away from the routine of their daily lives during the pandemic period with its meditative displays. When I had a chance to catch up with Anadol through a Zoom interview, which has also become a common practice due to COVID-19, the artist said that the presentation of such an exhibition for free of charge during this challenging period affected the visitors’ reaction in an incredibly positive way.

Indeed, there is an intense and collective work behind the exhibition, about which I was curious most. The exhibition is so dazzling and glamorous. This being the case, how will the visitors see beyond the exhibition’s mesmerizing presentations? Refik Anadol arranged his most comprehensive solo exhibition in Istanbul with his studio in a way to ensure the visitors will also comprehend the inspiration of the show. Let’s learn about all the details from Anadol.

From raw data to diverse installations

“Machine Memoirs: Space” comprises two sections approaching humanity’s explorations of space from a distinct aesthetic perspective and thematic orientation. In the first section titled “Memoirs,” the artist, collaborating with NASA Jet Propulsion Laboratory (JPL), exhibits a series of data paintings that utilize over 2 million images that were captured and recorded by the International Space Station (ISS), Hubble and Magdalena Ridge Observatory (MRO) telescopes and other sensors and satellites. These images are the largest space-related dataset ever used to train a generative adversarial network for an artwork. Anadol underlined that they intentionally presented this data in the raw version in this first part of the exhibition to lead visitors to understand how he questioned whether machines can dream if they learn and how his studio carried out works to realize this dream.

In the second section “Dreams,” installations of various sizes interpret the same artificial intelligence data in different ways. For example, this data turns into pigments through fluid dynamics on the second floor, while they welcome us in a form of robotic sculptures on the upper floors.

Among the second section’s works, a 15-minute immersive artificial intelligence (AI) cinema installation is the favorite of the visitors according to my observation. The cinematic part of this section invites them to step into the mind of a machine. Experiencing a multidimensional, dynamic visualization of how artificial intelligence makes connections between these vast data clusters, the audience finds themselves in an expanding data universe. This space not only represents the interpolation of photographic space archives as synthesis but also becomes a latent cosmos in which dreams are the main currency of artistic creativity.

Revealing the artistic expressions of the Anadol and his studio's groundbreaking research projects on space-related data visualization through machine learning, the exhibition can be visited until April 25. But what about Refik Anadol Studio?

In the art world, establishing artist studios is a common practice. Like many prominent artists, including legendary Andy Warhol, who opened his New York-based studio The Factory in 1967, Anadol also founded his own team to advance in their commitment by combining the forces. The Refik Anadol Studio, comprising of highly talented researchers, is actually the secret power behind “Machine Memoirs: Space.”

“If you want to go fast, go alone. If you want to go far, go together.” Recalling this African proverb, Anadol said: “As I wanted to go far throughout all my career, I established my studio. We are a very precious team of 14, using 14 languages and representing 10 countries now.”

The Refik Anadol Studio includes enthusiastic experts who know programming languages and keep up with the technology, according to the artist. “My aim is to go deeper in many diverse subjects together with my studio members.”

While the media arts are highly popular in the last century, the Non-Fungible Token (NFT) digital art craze created hype in the recent period. You can think of NFT as a unique proof of ownership over something you can't usually hold in your hand like a digital artwork or a video clip. After taking a journey in media arts and “Machine Memoirs: Space" with Anadol, I lastly wanted to learn his perspective on this latest craze as a media artist who is up to date with the latest trends.

Anadol received invitations from various NFT marketplace platforms like Nifty Gateway and sold some of his works here, especially during the last six months. The artist believes that NFT has a modifier and transformative side. He said that NFT was a reaction to those who do not see digital arts as a real art form.