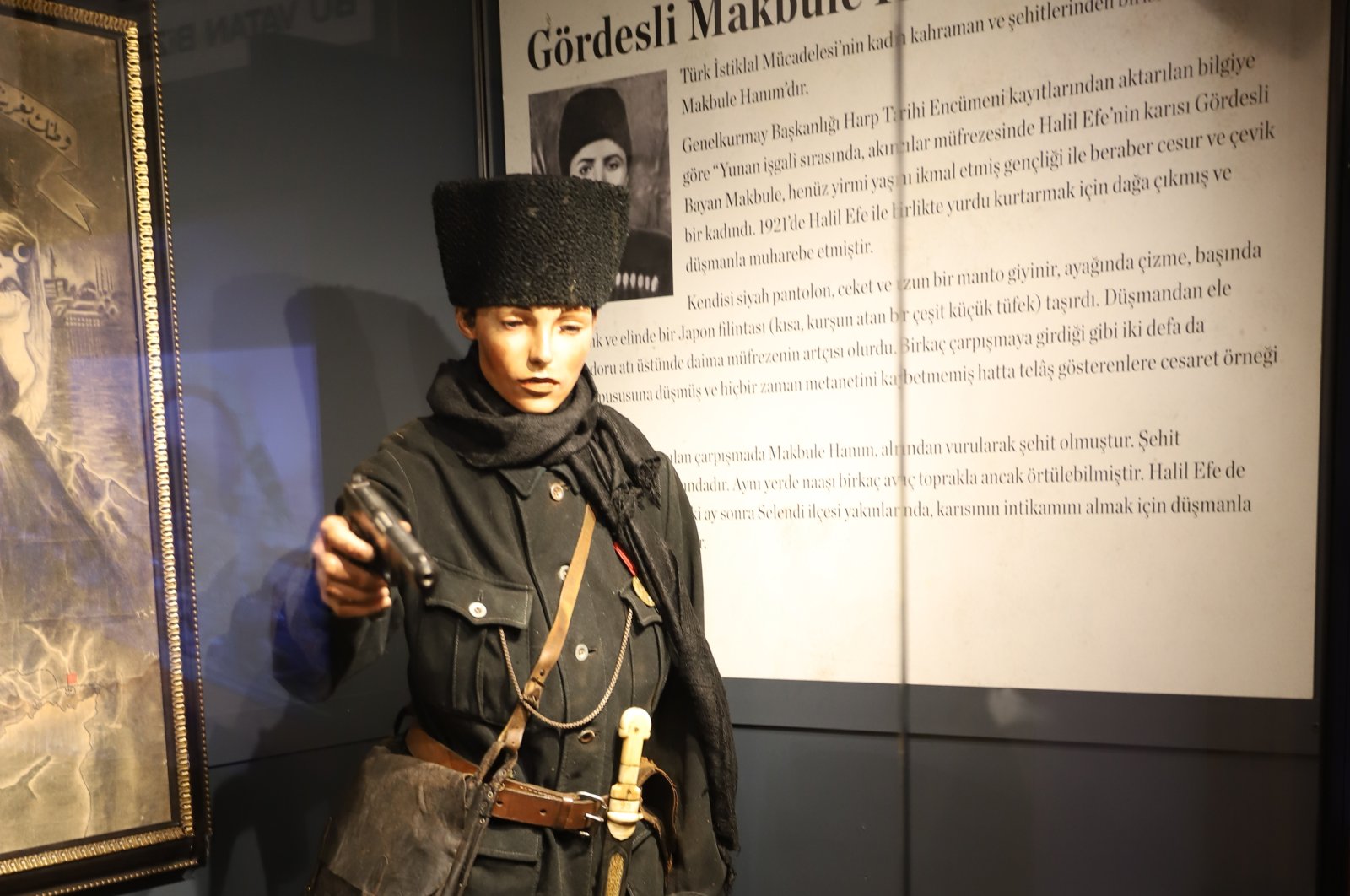 A model of a Turkish heroine on display at the exhibition in the Istanbul Cinema Museum. (Photo by Meltem Sarsılmaz)
by DAILY SABAH Sep 05, 2021 3:42 pm
RECOMMENDED

A new exhibition to commemorate the women heroes of the First World War (1914-1918) and Turkey’s War of Independence (1919-1923) was launched at the Istanbul Cinema Museum, which opened its doors to art lovers in February at the Atlas Theatre building on the touristic Istiklal Street, with an opening ceremony on Friday. "The Exhibition of Women Heroes in the First World War and the War of Independence,” consisting of works belonging to the Hisart Museum collection, will remain open until the end of September.

Noting that the newest exhibition at the Istanbul Cinema Museum is very important in terms of its content, Ersoy said: "While we were fighting with heart and soul in the War of Independence, not only our men but also our women and children took part in the struggle. In this exhibition, we have a chance to see the difficulties experienced by our women, the responsibilities they took and the heroism they showed.” Drawing attention to the dioramas displayed in the exhibition, Ersoy said: “There are beautiful dioramas. In particular, we have the chance to see the figures and personal belongings of Safiye Hüseyin Elbi, who was the first to graduate in the seminars of the "Hilal-i Ahmer" – today known as the Red Crescent – our child heroes or Fatma Seher Erden, the Turkish heroine known as Kara Fatma and winner of the Medal of Independence. The exhibition takes us on a historical journey.”

Beyoğlu Mayor Haydar Ali Yıldız also said in the ceremony: “It is a very meaningful exhibition because it both tells of our struggle for liberation and also tells of the role of women in the War of Independence. Turkish women have run their homes and also made sacrifices during times of struggle throughout history. Therefore, the role of Turkish women in the national struggle is too big to fit into this exhibition, the size of their heart is too big to show in this exhibition.”

Nejat Çuhadaroğlu, the founder of Hisart Live History Museum, brought his longtime experience in modeling, diorama and collecting together in this exhibition with various exclusive works. He said: “The Turkish people saved the country as a result of a war in which they participated as a whole without age difference. Turkish women, who participated intensively in the meetings held to protest the occupation, took part in the national struggle both at the front and behind the front. The women established aid societies, took care of the wounded and sick, supplied clothes and food to our soldiers and carried weapons and supplies to the front with tumbrels. I believe that our exhibition, which focuses on the difficulties, responsibilities and heroism of Turkish women, one of the most important actors of the national struggle, will shed light on our history.”

Documents and photographs of the nursing courses established by the "Hilal-i Ahmer Cemiyeti" (Red Crescent), aid badges and postcards, medals and letters belonging to the first Turkish nurse Safiye Hüseyin Elbi, documents showing the activities of carrying ammunition and supplies during the war, propaganda posters, newspaper copies of the period and many other materials are on display at the exhibition. The show also presents various models and dioramas bringing the National Struggle to life.

The exhibition can be visited by history enthusiasts every day except Mondays between 11 a.m. and 7 p.m.