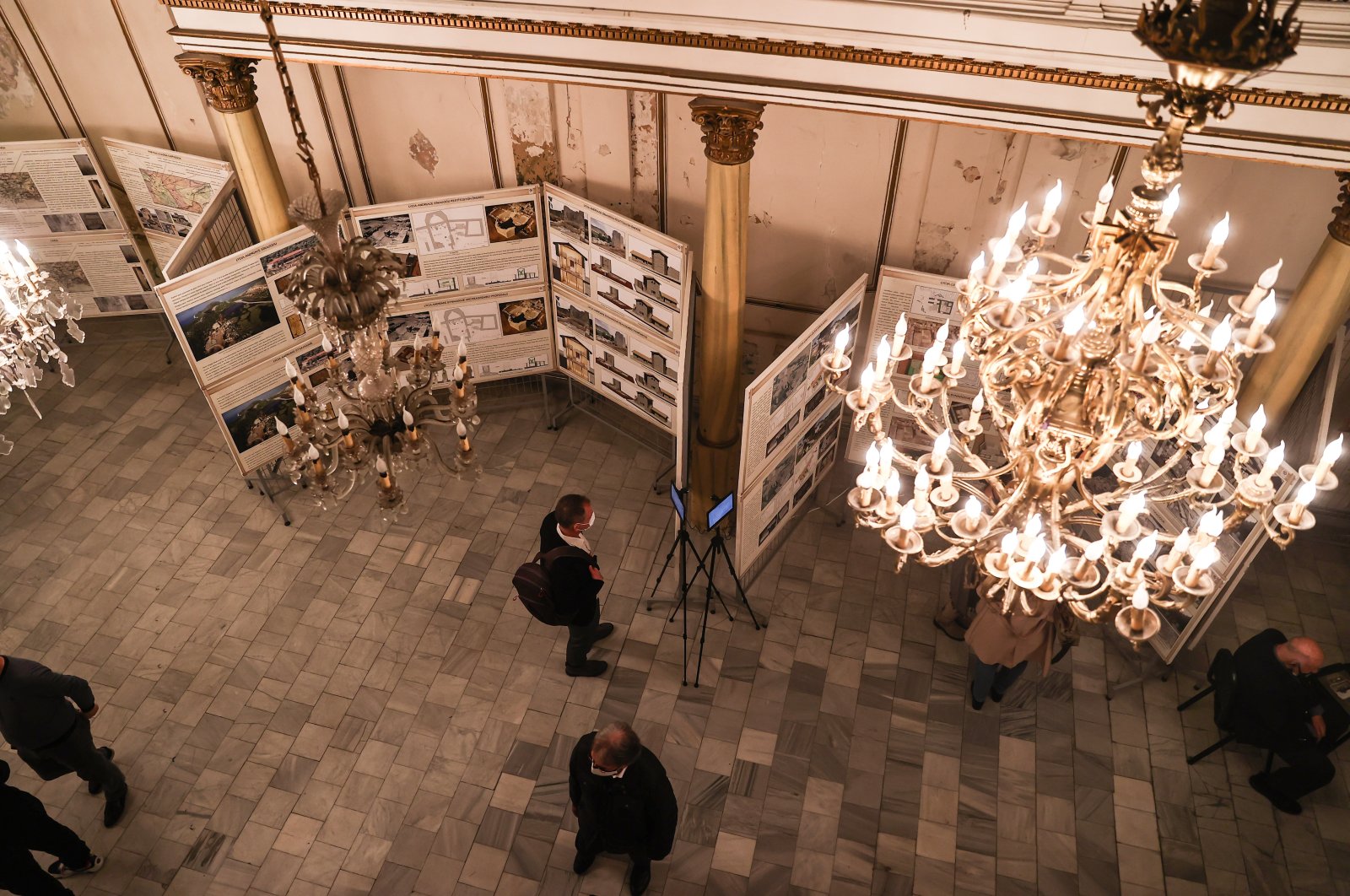 A new show that focuses on Jewish history in Turkish lands was opened by the Quincentennial Foundation Museum in Istanbul’s historic Zulfaris Synagogue Wednesday.

The exhibit brings together structures showing Jewish identity on the Turkish soil of Anatolia for the first time, Çiğdem Öner, curator of the "Jewish Identity Engraved on Stones" exhibit, told Anadolu Agency (AA) in the synagogue.

"I'm doing my doctoral work on ancient synagogues," said Öner, who has a Sephardic Jewish background and is part of Akdeniz University's Mediterranean Civilizations Research Institute, where she works on excavations in the ancient city of Phaselis in Turkey's coastal Antalya province.

"There are a lot of inscriptions, tombstones, (so) we thought why not share them all? And this exhibition was realized," added Öner, who is also a retired architect.

A catalog of the exhibition will also be released, she added.

Nisya Isman Allovi, the director of the Quincentennial Foundation Museum, said that the show aims to tell the history of the Jewish presence in Anatolia in light of information from archaeological digs.

Noting that the show includes 3D images of historical synagogue structures, Allovi said: "The exhibit shows that there has been a Jewish presence in Anatolian lands for 2,600 years, that they came here after the destruction of the Temple of Solomon," in the sixth century B.C.

"Some 2,600 years ago, when Jews came to Anatolian soil, they came to Anatolia and Thrace, and settled in ancient cities, especially to trade," read a statement from the museum.

"Archaeological excavations present concrete findings such as tombstones, inscriptions, objects, and synagogue ruins that prove the Jewish presence in this region," it added.

A film by Ariel Goldenberg recapping the exhibition can also be seen as part of the display, which is open for visitors through Nov. 21.

New finding: Synagogue in town of Side

The exhibit displays concrete Jewish findings by region, and together with a synagogue in the coastal town of Side in Antalya, which was recently discovered, offers details of the synagogues of Andriake (also in Antalya), Sardes (Manisa), Priene (Aydın), Limyra (Antalya) and Miletus (Aydın), including 3D proposals for restoration and models.

Öner also noted that the exhibit for the first time showcases public findings on the synagogue in Side.

"Most excavations are still ongoing," she said. "We know that there's a Jewish settlement in the ancient city of Phaselis (in Antalya), there are documents, but we haven't found anything yet. Maybe this exhibit will end, but next year we will find something."

Öner said she hoped her work would provide "a different point of view" for other researchers.

Speaking to AA, Silvyo Ovadya, the head of the Quincentennial Foundation Museum of Turkish Jews, highlighted the importance of Zulfaris Synagogue as the exhibition site.

Ovadya explained that when it was first opened the museum was located at the Zulfaris Synagogue and stayed there for around 12 years, until 1992, when it moved to Istanbul's teeming Galata neighborhood.

"When we designed this show, we thought it was one of the most ideal places," he said. "It's not a huge space, but we see it as a very historical place that will embrace this exhibition."

Thousands of years, not hundreds

Noting that the exhibit brings together findings from digs at five synagogues, Ovadya said: "It is often said that the history of Ottoman and Turkish Jews began after the Spanish Inquisition in 1492."

Turkey has had Jewish communities since ancient times, and many expelled Spanish and Portuguese Jews were welcomed into the Ottoman Empire in the 15th century.

The fact that the foundation is called quincentennial – meaning 500 years – tends to strengthen the misconception that Jews have been present in Turkey for five centuries, said Ovayda.

"But with this exhibit, we tried to demolish this discourse a little bit," he added. "And we tried to reveal the history of the Ottoman and Turkish Jews, who have a history of 2,600 years in Anatolia."