On color and frames: ‘Polychromatic’ at Daniel Raphael Gallery 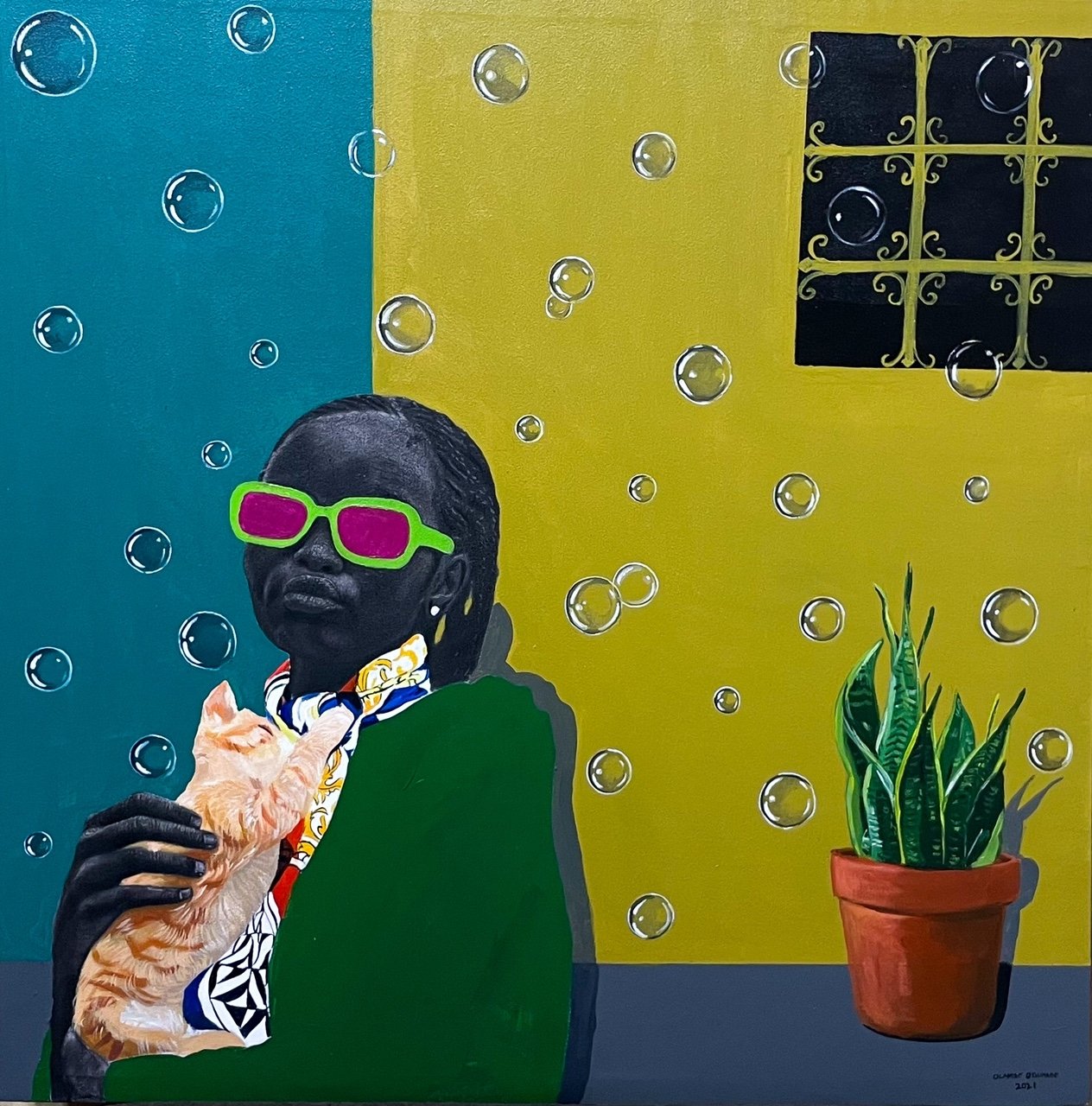 A virtual group exhibition at Daniel Raphael Gallery in London by Iranian curator Tima Jam explores the ways in which color is integral to how people identify with themselves, others and their surroundings

The act of curation has the potential to inspire bold moves toward collectivity in a variety of its forms – social, creative and economic, all the more so in the name of fundamental aspects of the human condition in concert with people otherwise separated by nationality, physiology or any number of perceived differences. While in Istanbul, curator Tima Jam dedicated her work to seeing contemporary art from Iran and Turkey under the same umbrella of visions, their dialectics coalescing. Now in London, she is widening her perspicacious grasp to include a broader representation of the internationalist art world.

The artists whose works come together for “Polychromatic” are from Turkey, Iran, Nigeria and Mexico, and their pieces are as diverse as their respective nationalities. The show is currently online via a virtual walkthrough under the auspices of Daniel Raphael Gallery in London, which, by collaborating with Tima Jam, has elaborated its voice as a unique curatorial platform on which to perform acts of solidarity. A case might be made for transcending national modes entirely in the context of new art, though, especially in the prevailing, tested milieu of the U.K. today, such reflexive geopolitical awareness remains pressing.

In the statement of its curation, “Polychromatic” puts forward a number of concepts concerning matters of identity, a crucial point of administrative interest for agents and rulers of any modern nation-state in which the lives of individuals are held at a distance from persons not entirely subject to its obligations and rights of the citizenry, namely foreigners. In response, artists are, as ever, at the forefront of change, as models and leaders, at times antiheroic, in a progressive forum inside the national construct, but not of it. That “Polychromatic” features artists from outside the U.K. is a testament to its alignment with universalist values.

The prospective world heritage that creatives are manufacturing toward a more inclusive future is linked to prehistory, and while running through the bureaucratic nightmares and bountiful spoils of modernism, preserves a link to sources of shared insight into the manifold nature of humanness. The element of color is both a point of pride and shame in societies that have historically benefited from artificial, unscientific and imposed hierarchal orders based on spectral ranges of integumentary pigment. By focusing on artists from Asia, Africa and Latin America, Jam is raising her curatorial practice with discursive urgency.

Instead of looking away to transcend the biases at work in any social construct built around the notion of individualism, art fills the eye to the brim with the light of awareness. Between the palpable and the visible, colors are effectively bridges, or doors, opening the mind to be able to see patterns of involuntary cognition, and, in turn, to check them. The gift of art is that these educative phenomena unfold like an ameliorating tonic, sometimes bitter, within a round of aesthetic pleasure and conceptual curiosity. In lieu of visibility, color is the equivalent of metaphor, as it is applied in literature.

Jam has explicitly referenced Surrealism and psychoanalysis to frame the ways in which the works of the artists on display might be seen, even if unconsciously, with a keen eye for their usages of color. Emotions, for example, are expressed not only on the surface, in facial gestures, but are deeply woven throughout personal psychology. The paintings of Turkish artist Mustafa Horasan are dark with bruised flesh tones of black, purple and red. His bodily shapes are rasped and semi-transparent, recalling a fantasy world out of the alchemical imagination of Carl Jung and his least inhibited patients.

There are essentially two series of canvases by Horasan, dichotomized by their underlying washes of hue. Horasan is not technically virtuosic but instills more of a naivety in those who would appreciate the breadth of his strokes, the primal burst of images, disproportional hands and childlike skulls that he projects like the notion of elementary ideas professed by the German ethnographer Adolf Bastian. Like the Mexican artist Horacio Quiroz, Horasan’s pieces are alternate to the mainstream capitalism of the art world. His is an anti-aesthetic that, simultaneously, employs a nuanced, layered sensibility for light and movement.

Quiroz and Horasan also relate in their integration of words, while forwarding particularly garish, bombastic styles. All of Horasan’s paintings at “Polychromatic” are untitled. One piece, painted in 2020, shows a wolfish face, in profile, exhaling a cloud that blows over the onomatopoeia “boom,” as the silhouette of a human figure steps onto a black circle oval, “whole,” spelled with two o’s. The surreality of his paintings are multidimensional, somehow more otherworldly and opaque, certainly darker on the spectrum than that of Quiroz, whose techniques are sharper, yet no less subject to realism.

Quiroz’s oil painting, “Why should our bodies end at the skin” (2020), foregrounds language as a portal through which the gaze of humanistic plurality burns. Its bright, yellow color scheme is shared by the accompanying piece, “Capitalism in the Web of Life” (2020). Both paintings stretch portraiture to the reaches of multiplicity, as it joins two feminine faces, lively and meditative. The short-cropped hair on their hoodie-wrapped head is a trendy, bleached white, streaked with blues. Quiroz seems to critique the viral contiguity of the prevailing economic order as youth, grasped from behind by two, nail-polished hands.

The oil work of Milad Mousavi is perhaps outwardly similar to that of Quiroz and especially Horasan. The young, Tehran-born artist paints corresponding themes. “The Artist Has Died” (2021) is one such piece, with a hint of self-portraiture, as Mousavi’s unmistakably mustachioed visage is seen throughout his oeuvre at “Polychromatic.” His thick lathering bears an uncanny likeness to Salman Khoshroo, also born in Iran in the 1980s, yet steeped in the New York schools of his upbringing. Khoshroo’s compact oils on the wood are sculptures of paint, faces leaping out of two-dimensionality with fresh juxtapositions of color.

A most welcome curatorial innovation enlivening the scope of “Polychromatic” is the inclusion of seven paintings by Nigerian artist Olamide Ogunade Olisco. As in the works of Quiroz, Olisco’s figures stare back at the art-loving seer, only with piercing, almost vengeful looks of intensity and scrutiny, untrusting and thoughtful. Olisco is masterful in matte black, emphasizing the beauty and power of African people against the saturations of loud colors. One acrylic and charcoal on canvas, “Secret Admirer” (2021) centers on a woman holding a kitten. Her sunglasses are neon, electric, and she, unsmiling, is equal parts aloof and captivating, still before a room glowing with bubbles. The black in the window outside, however, is darkest.