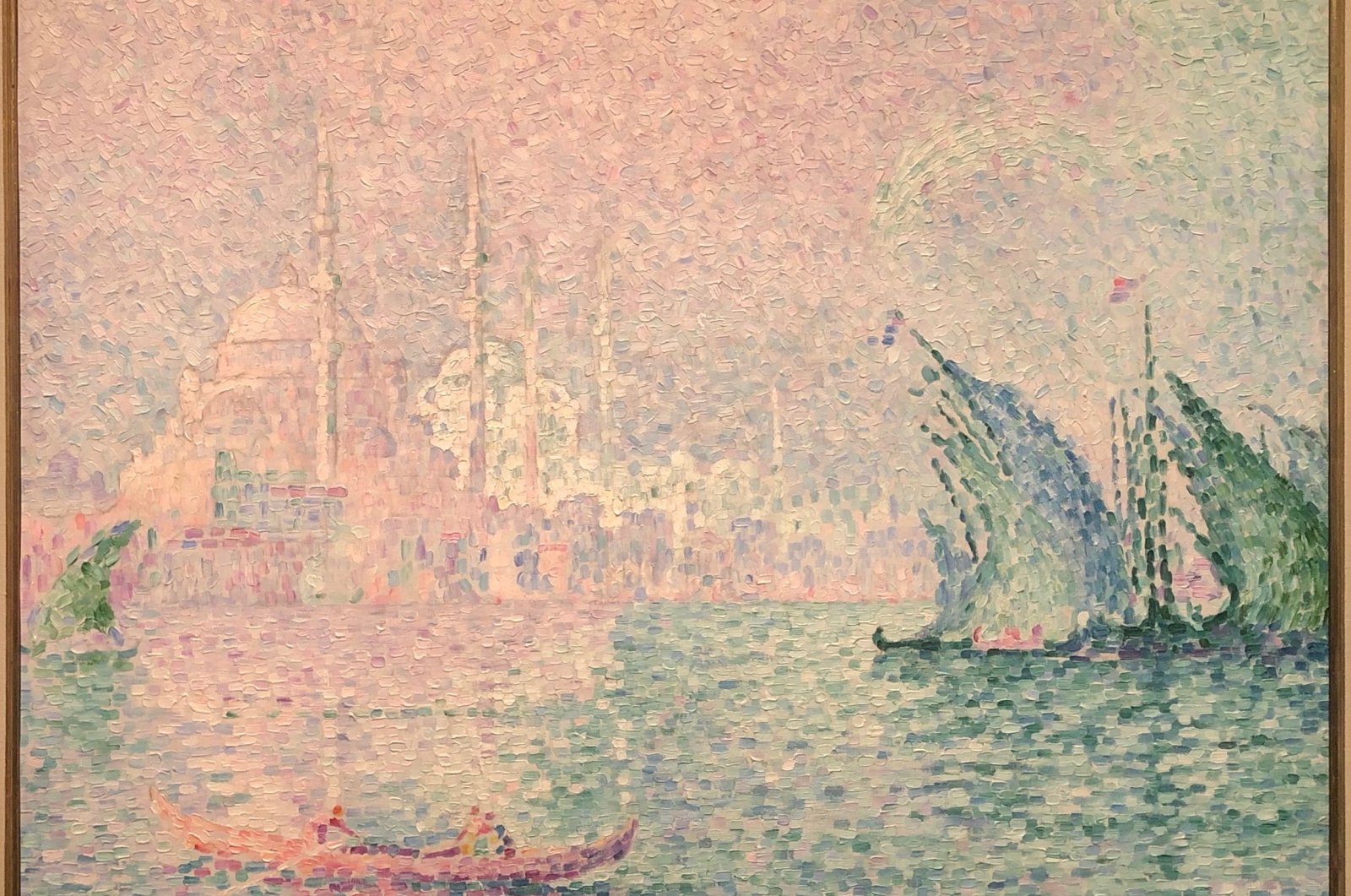 An exhibition of pointillist oils at the distinguished Wallraf-Richartz Museum in the heart of Cologne, Germany, focuses on the works of French painter Paul Signac, who set sail for Istanbul in the early 20th century

It is said to be Cologne’s first museum, the legacy of an art collector whose last breaths were uttered with the intention of bestowing his city with all of the beauty, grandeur and ideation that he had cultivated, like a gardener of the mind, in private. Its publication, sealed by an architectural prize of a building that displaced a Minorite monastery, was a mid-19th century cause célèbre among the culturati of the Rhineland, as progressives built the foundations of what is an enlightened region in Germany, a Europeanized field, where industrial workers brush shoulders with cultural producers in an air of liberal inclusivity, though not without its tempests.

Just before its centennial, during World War II, the Wallraf-Richartz Museum endured heavy blows when the Nazis targeted its most famous modern artists as degenerates and came thieving before bombing raids destroyed the structure entirely. Fortunately, artworks were saved, returned and with subsequent donations, the institution stands gleaming, surrounded by outstanding construction projects that continue to revitalize Cologne’s historic old town in the shadow of its treasured cathedral. Although a consequence of dusty Western heritage, its collections testify to the West’s ardent cultural self-preservation.

Within the canon of impressionists, including Georges Pierre Seurat and Camille Pisarro, to name only two, the technical ingenuities of pointillism gave realistic art a glimmering softness, a subjective patina that riveted the notion of pictorial capture to the wall of mainstream perceptual ideology. The artists had been revolting against the largesse of status quo patronage. For a century past, prior to the involution of form in art, visionaries plunged forth beyond the Christian pale, headed East in search of inspiration, otherness, the magic and mystery of an ancient and deathless muse. But as the years wore on, their canvases simply proved salable and done as the belle époque.

The unrivaled prowess of Paul Signac, however, shot forth despite those painters of the Orientalist persuasion that had preceded him, toward a reexamination of Eastern lands circumscribed or neighboring the Ottoman Empire. What he succeeded in demonstrating, perhaps when seen retrospectively through the eyes of critique, yet nonetheless with meticulously color-coded brush strokes, was how selfishly the creatives of Europe see their abutting civilization. The rulebook of objectivity was being thrown overboard, brazenly unapologetic, and so, Signac did not take it with him when he went to Istanbul in 1907.

As an artist abroad

The verdant parks and river walks of Cologne are punctuated with the image of a loaned painting, which, only after a close look, a full stop, does its likeness emerge, as that of the skyline in Istanbul’s Fatih district, climbing to atmospheric heights at the tips of the Yeni Cami (New Mosque) in Eminönü quarter. It serves as the centerpiece to the exhibition, “Bon Voyage, Signac!”, in which museum-goers are lavished with the piquant graces of the impressionist pantheon. Signac is among the better-known names of Claude Monet, Vincent van Gogh, Paul Cézanne, Paul Gaugin, Henry Matisse, and the works are divided between his travels in France, Italy and Turkey.

The occasion is marked by an unprecedented point of museological innovation, namely the restoration of Signac’s iconic painting, “New Mosque” (1909), which, according to the curation, was a special apex of delight for the modern architect Le Corbusier (Charles-Édouard Jeanneret), who enjoyed his fellow Frenchman’s pale turquoise vision as the aesthetic apotheosis of Istanbul’s unique visage. Signac’s wanderlust began as a child of Paris, taking his palette around the countryside, eventually reaching the Italian border, which he crossed, not on commission, but from pure and unadulterated curiosity. The redolence of his footsore passion is apparent.

An avid sailor and impromptu hiker, also going by car and train, Signac braved the landscapes of his far-flung imagination. His bent was southward, where colors beamed all the more vibrant with every step toward the equator, under warmer skies. He was at once a diarist, recalling the brightness of the “Orient” on arrival to the storied piers of Istanbul. Interestingly, the exhibition of “Bon Voyage, Signac!” includes a thoroughly detailed geography of the painter’s newfound urban environment, complete with twenty-five landmarks projecting a sense of Istanbul’s evergreen seduction for guests, as its pearls of historical fascination have ever attracted seekers of every stripe, intellectual, creative and otherwise.

The permanent loan, by Stiftung Kunst im Landesbesitz (NRW), of Signac’s piece “New Mosque” to the collection of the Wallraf-Richartz Museum and Foundation Corboud, the full title of the institution, marks a turning point in public appreciation of a broader scope of impressionist history, encompassing diverse, pictorial representations of Istanbul over the ages. Practically fresh out of his studio, the painting had accumulated a layer of gray dirt, on account of Signac’s refusal to varnish the painting, so as not to dull its powerfully emotive colorations. In turn, conservators at the Wallraf-Richartz approached the daunting task of teasing out its underlying paint, stroke by stroke.

After some 200 hours, a team led by Caroline von Saint-George had followed the master craftsmanship of Signac, every movement of his brush, to the millimeter, an order of work made more difficult due to the technique of “Divisionism,” behind the unparalleled look of oils exacted by those artists in the Neo-Impressionist camp especially. What has been revealed is an absolutely lucid exercise in color theory, a veritable decomposition of spectral separation defined by luminosity. It was an element of what has become known among postmoderns as visionary art, suffused with supernatural light. Signac’s painting, however, is grounded by the visibility of its sketched lines, which he formed prior to applying his color schemes.

Under rays of white

To see the waters of Istanbul, doused and dashed with such a practiced progression of Europe’s deep creative methodologies is renewing. “New Mosque” in particular holds a kind of surprising magic in the fade of its titular focus, blending into the emerald, marine horizon. Signac understood that water was Istanbul’s lifeblood and that the city did not bustle, but flowed, by the rudders of its curved sail ships and thin rowboats that once dotted the seascape aplenty, and now hearken to a lost time that Ara Güler steadfastly documented before it vanished.

Although there are a mere three paintings that comprise the “Istanbul” section of “Bon Voyage, Signac!”, with most of the exhibition comprised of his productivity in Italy and France and a healthy smattering of works by other impressive Impressionists, it is still a wonder to behold their exquisite intricacies. Actually, “New Mosque” is decidedly the lesser elaborate of the three. But in its glowing spaciousness, Signac expressed his signature, the technical beauty of color’s relation to light as their harmony creates form. It is as if Signac, finally, was not bluntly imposing European art onto the East, but perhaps, he was instilling a manner of shared humanity in terms of how cities are perceived in nature, like sunlight on water, equally before a mosque or cathedral on the Bosporus, Rhine or Seine.