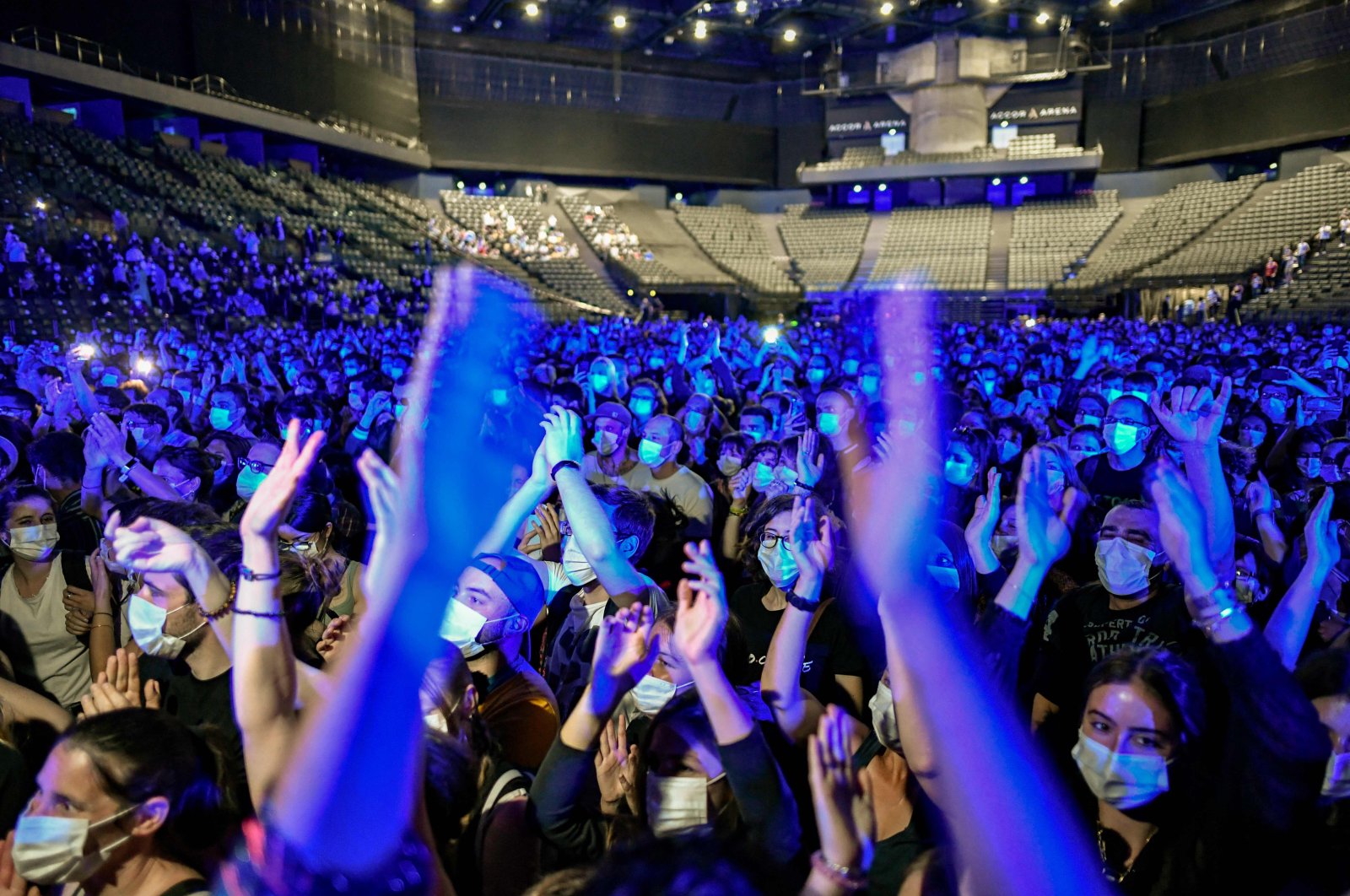 People cheer during a concert of French DJ Etienne de Crecy and rock band Indochine, aimed at assessing the risk of COVID-19 transmission at live events, at the AccorHotels Arena in Paris, France, May 29, 2021. (AFP Photo)
by French Press Agency - AFP
May 31, 2021 10:18 am

An experiment launched by the Paris hospital authority has meant that fans of Indochine had a chance to welcome a return to pre-pandemic life, with masks of course, as they enjoyed a performance by the French rock band at a concert venue in central Paris, in the name of COVID-19 research.

Around 5,000 concert goers took part in the experimental event at Paris's Bercy concert hall. A further 2,500 volunteers who did not attend the concert will serve as a comparison group.

The trial to assess the risk of COVID-19 transmission at events has been eagerly awaited by the live music and entertainment sector which has been devastated by the pandemic.

"It's been so long that we have waited for a reopening of this kind of event. So finding a concert, in addition to it being Indochine, is really great," said Camille, 26, from the Paris suburbs.

Lyrics from one song, "Marilyn," seemed to express what many music fans have been feeling, "We want to live ... even stronger."

Before being admitted, the concert goers, all aged 18-45 with no special risk factors, handed over an envelope containing a saliva test conducted earlier Saturday.

Each person was also required to have had a negative antigen test in the last three days.

Once inside, no social distancing was required but masks were compulsory.

Due to the 9 p.m. curfew still in place in France, the concert started earlier than usual with Indochine on stage by 6 p.m.

Similar trials have already taken place elsewhere in Europe and the Bercy concert had been postponed a number of times.

It finally went ahead two days before the extension of France's vaccination programme to all adults, selecting participants from among 20,000 volunteers.

Results from the concertgoers study, organized at the initiative of the AP-HP (Assistance publique-Hopitaux de Paris) and Prodiss, the national union for musical and variety shows, with government support, are expected by late June.

Previous experimental events in Spain and Britain have not shown any increased risk of transmission.

As the French summer music festival season approaches however, several major events have already decided to throw in the towel.

Events are only authorized to go ahead if fans are limited to one per 4 square meters (4.8 square yards).