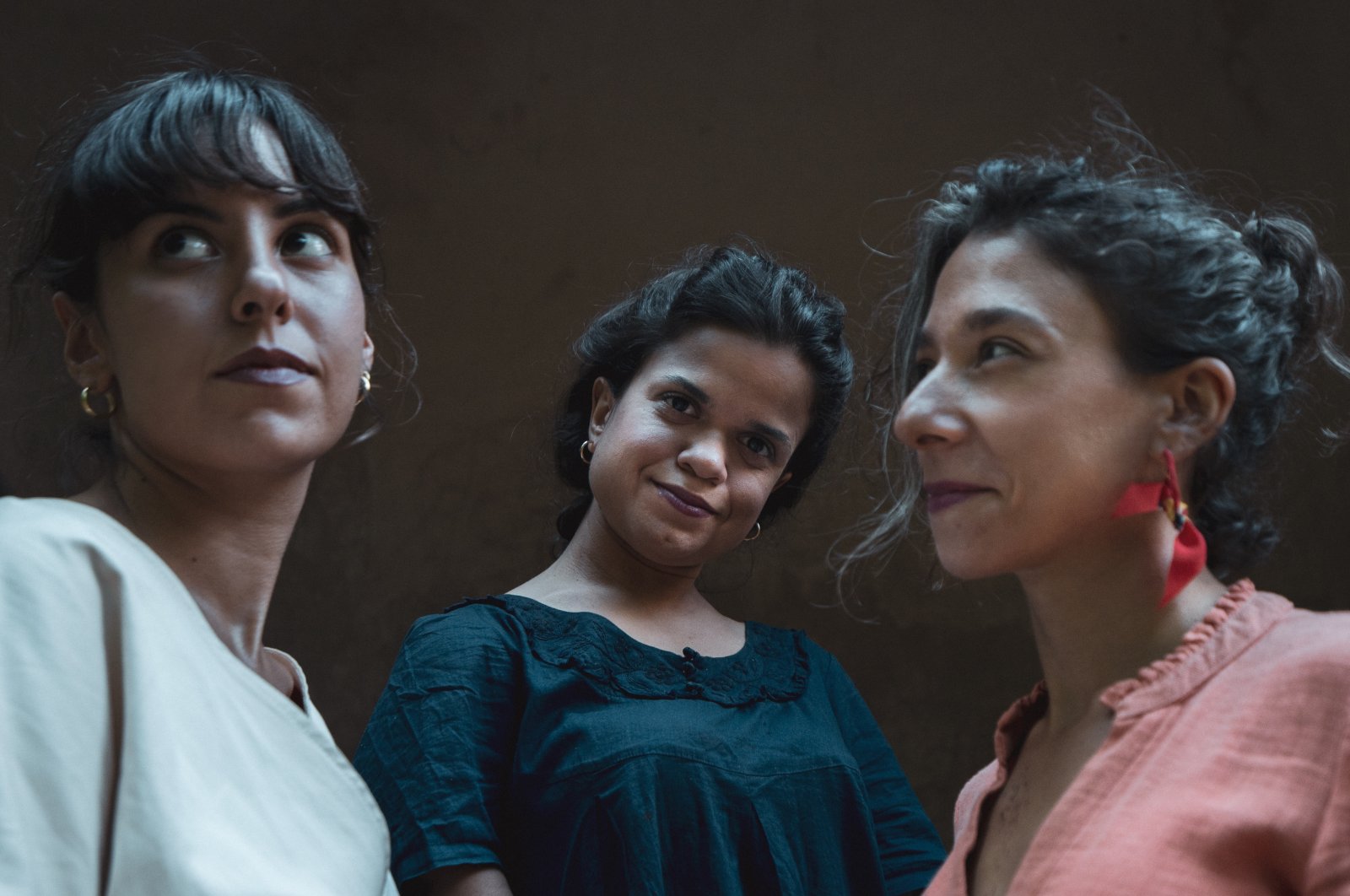 Naming their band after the Ottoman word for sound, the all-female trio SAVT creates an authentic, musical language by reviving traditional rhythms

It was a rainy Sunday morning, and I was looking for something to relax my mind after a tiring, stressful week. I am a fan of more upbeat music like different types of rock or metal, but this time I was in the mood for something with a slower tempo. A YouTube video a friend sent me a while ago of an improvisational band was at the back of my mind. As I did not have enough time to check it when he first sent it, I decided to give it a try. Who knows, it may have a feel-good effect on me!

I thought the video was a clip of a song but instead, I began watching a wide-shot production of a live performance at a location that resembled a car park. Then, I saw the title of the video lower on the page: SAVT Improvisation at Otopark. The SAVT car park performance was part of the event “A Room of Rhythms – Otopark” put together by Cevdet Erek. Artist Erek lingers in my memory with his “Bergama Stereotip” at Istanbul’s Arter. This sound architecture conceived for the gallery space interpreted Pergamon Altar’s Grand Frieze, depicting the battle between the underground giants and the celestial Olympian gods, in the form of a loudspeaker frieze. With a great interest in monumental structures in Anatolian lands, it was impossible for me not to remember this installation.

However, the artist’s “A Room of Rhythms – Otopark” is an earlier project prepared for the 14th Istanbul Biennial. The project was launched in Istanbul’s Tophane quarter with the existing architectural components and sound installation in a car park. “A Room of Rhythms – Otopark” provided an experience of sound and space in different layers of rhythms including those of everyday life and of musical measurements. While changing over the course of the biennial, the project continued once Erek learned that the car park will not be demolished. However, this time, the artist's sound system was removed, and the space began hosting other artists who brought with them their own rhythms. For example, Tolgahan Çoğulu performed in the space with his musical invention, the microtonal guitar accompanied by Okan Kaya on his pocket clarinet.

Among the artists that took to the stage as part of the project were SAVT, comprising of Merve Salgar on tanbur, Elif Canfeza Gündüz on classical kemençe and Zeynep Ayşe Hatipoğlu on violoncello. The band performed at the car park with great enthusiasm and following the concerts, the group continued to play together. The core element bringing the band together was their shared curiosity and interest in new sound fields, improvisation and writing new music to be played traditional instruments.

After watching SAVT’s improvisation at Otopark, I started to think about how musicians are able to improvise while playing their instruments. Given that it is so spontaneous in nature, I assumed it must require years of musical training and experience. A few months later, I had the chance to catch up with the band.

Naturally, the first thing I want to know was how they started improvising and what the significance of this technique in music is. They explained that improvising is creating in the moment and is a combination of the creative process with the product of this process simultaneously. This practice, which differs according to the culture and period it is performed in, is actually one of the most primitive forms of musical expression.

The practice of improvisation, like all oral traditions, is also of great importance in the Turkish makam tradition. Makam is a system of melody types used in Turkish classical and folk music. Musical improvisations are expressed in the form of "taqsim" in the Turkish makam tradition. Taqsims are a form of improvisation that is expressed within certain rules. Thanks to their interest in traditional music and its taqsims along with their desire to explore novel sounds, the band sought to create an original musical language by straying from the rules and patterns when improvising. In short, they view free improvisations as a powerful tool in their quest for their original musical language.

Cellist Hatipoğlu explained that when listening to or playing improvisational music, she becomes curious about how the sounds will evolve. “I am very excited that the performance is shaped by our environment and the many elements we interact with. With its spontaneity and surprises, the performance turns into a unique experience,” she said.

The band’s kemençe player Gündüz said that she spiritually dives into the world that her instrument presents to her while improvising. “During improvisation, I try to convey the joy and sadness at that place simultaneously. I do it by connecting to listeners sometimes or by going down to my inner world. It is actually the nature of improvisation. The audience who comes to listen to you also enters your inner world with your music.” Gündüz's last sentence struck me, and I recognized that this was what I had felt after first listening to their performance at Otopark. I could not explain it at the moment, but their music made me experience a part of their world even if it did not follow a prespecified rhythm, which I was not used to hearing and came as a surprise to me.

According to Salgar, what matters to her is the "moment of performance" itself and a moment of mutual transmission with listeners during their improvisations. The tanbur player said: “I think we are communicating with listeners through our improvised music in an unheard, uncertain, currently created language. After the concerts, we have the opportunity to chat with some listeners about what the sounds they hear evoke in them. This also feeds us and our creative process.”

The members of SAVT have devotedly provided a fresh take on Ottoman and Turkish music and created a new language that goes beyond tradition. However, their personal careers helped form this unique collaboration.

Hatipoğlu, the cellist of the group, grew up surrounded by music. It is no surprise that she has such a big love for music and decided to follow a career in the field. Over her primary school years, she was enrolled part-time at Istanbul University State Conservatory before continuing her violoncello training at Istanbul Technical University Turkish Music Conservatory (ITÜ TMDK) full time. She also studied composition and is currently pursuing her doctorate at the same university’s Center for Advanced Studies in Music (ITÜ MIAM) in the performance department.

Like Hatipoğlu, kemençe player Gündüz was also raised in a family of artists and according to her statements, she became a musician despite not planning to be one in her primary school years. Starting her musical education with piano, Gündüz then learned to play the classical kemençe, which is a pear-shaped bowed instrument mainly used in Ottoman music, with the guidance of her instructor Neva Özgen. After graduating from ITÜ TMDK’s kemençe department, she became a kemençe artist at the Ministry of Culture and Tourism Istanbul State Turkish Music Research and Application Community.

As a member of a musician family, tanbur player Salgar first received training at a Turkish music conservatory where her uncle and father taught. She decided to pursue a career in music and attended ITÜ TMDK Instrument Department High School as a tanbur student. “After graduation, I settled in France where I became more interested in improvisation practice. I still continue my education at the doctoral level in Strasbourg,” she said.

With their talent and impressive education, these three women perform timbres of the three different instruments that often complement each other.

The band tries to think about these balances with their Western and traditional instruments in their improvisations rather than focusing on a certain genre. Traditional music in itself is a constantly changing phenomenon that should take from previous generations but be presented with new perspectives, and thus continue to live, instead of being fixed and unchanging, according to the musicians.

As musicians who have received traditional Ottoman and Turkish music education, they feed on the memory of this tradition. In their performances, they are pushing the boundaries of traditional performance forms attributed to their instruments, starting from the improvisation form in makam music. They think that makam music’s taqsim forms can serve as a bridge between the new and the tradition. “We feed on our common cultural memory but also change tradition,” they added.

The band’s first album is “Birinci Hane,” which can be translated as "First House." The word "hane" means “section” in Turkish makam music. For example, the peşrev form in Turkish classical music consists of four hanes. “Hane” also means house. Therefore, SAVT shaped the main idea of their album, which consists of nine songs, in the axis of "house” with a reference to tradition. The titles of the songs on their album are references to important places, streets and houses that had an impact on their lives.

On the album, there is only one composed track titled “On the fly” along with the band's improvisations. Prepared by Hatipoğlu, the piece features musical elements that are open to the performers' interpretations. That is, the piece is shaped by those who choose to perform it.

SAVT had intended to create a second album, but the pandemic, unfortunately, prevented them from coming together to collaborate. Over the course of the pandemic, the band has made preliminary preparations and they are eager to record their second album at the first chance they get. They also hope to perform with leading members of the Istanbul improvisation scene in their upcoming projects.