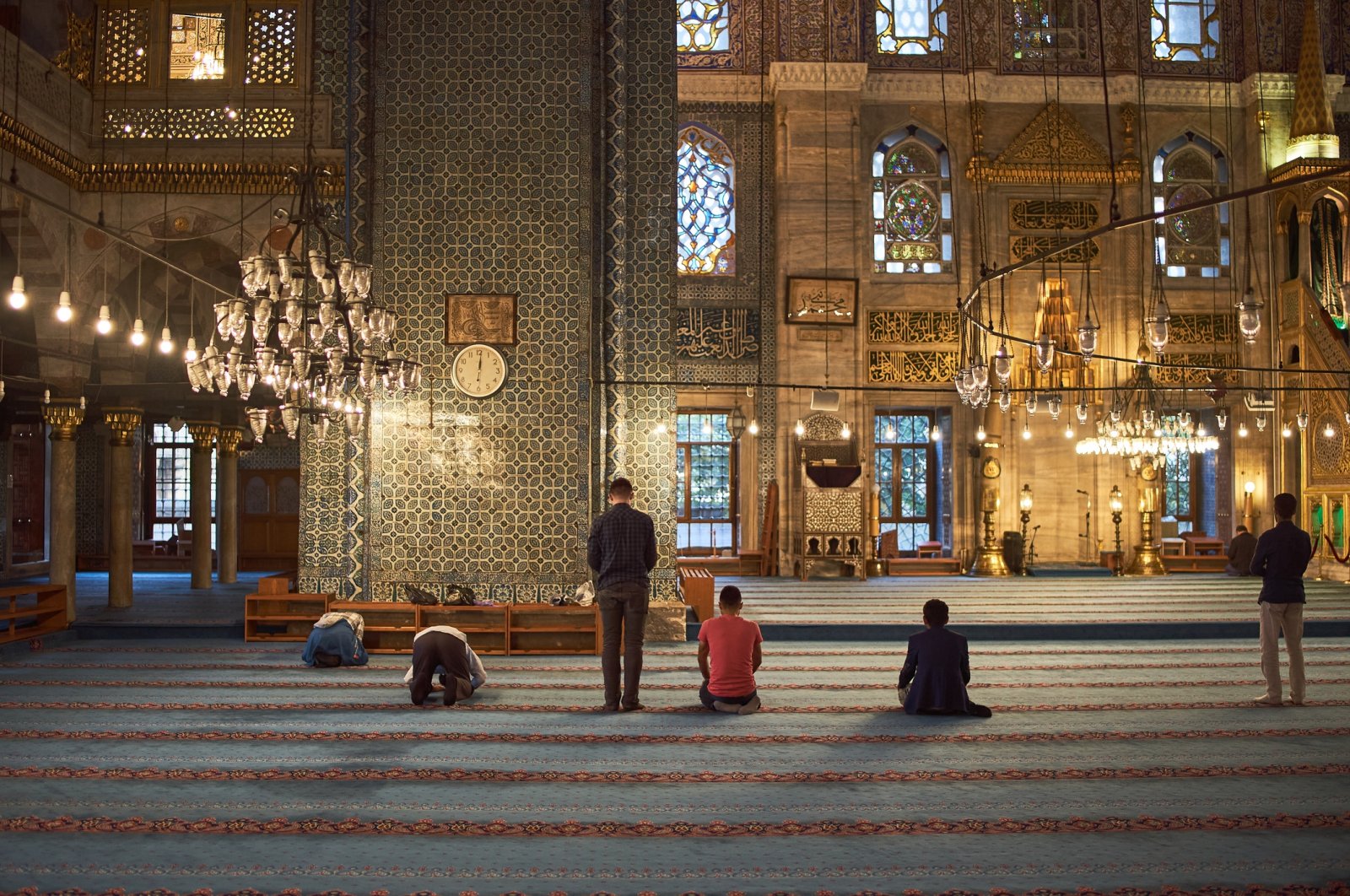 Muslim people pray at the iconic Yeni Cami mosque, which was built by the orders of Safiye Sultan and Hatice Turhan Sultan, in Istanbul. (iStock Photo)
by ALİ TÜFEKÇİ Sep 23, 2020 12:06 pm

It is thanks to the Islamic culture of charity foundations (waqf) that countless artworks have been able to survive so many centuries of war, pillage and destruction across the Middle East.

The development of this foundation culture can be traced back to the words of the Prophet Muhammad, who once said: "When a person dies, his deeds come to an end except for three: Sadaqah Jariyah (continuous charity), knowledge from which benefit is gained or a righteous child who prays for him." In other words, as long as people continue to benefit from a charitable deed made during life, spiritual rewards continue to be garnered.

As a matter of fact, the prophet demonstrated in practice that all kinds of property – whether movable or real estate – could be given as a form of charity, thus laying the groundwork for Islamic foundations to come into being.

The prophet personally devoted his date-palm garden in the town of Khaybar (in present-day Saudi Arabia) to the Muslims, along with the properties his wives inhabited following their passing. The homes later became the Al-Masjid an-Nabawi in Medina, a mosque often referred to as the Prophet's Mosque. His companions, known as the "Sahabah," also established many of their own lands to be inherited by the public.

The word "waqf" in Arabic means to "keep" and refers to allocating property to the benefit of people. Islamic foundation law is based on personal property. In many ways, the principles of how the offering should function is priorly determined. Accordingly, property is a holy and inviolable human right.

All Islamic law texts stipulate that: "The conditions set by the foundation’s owner are like divine judgment." In other words, these conditions cannot be changed in the same way a verse of the Quran or hadith of the prophet cannot be altered.

The ownership of the endowed property thus belongs to God, and its benefit belongs to his servants. This endowed property could range from anything to a book, a fountain or an entire mosque. Endowers are required to write a document called “waqiyah” (deed of trust/voucher of a pious foundation) to ensure nothing happens to the property after their death. In the document, the endower lists all their income donated to the foundation and all the conditions on how they would like it to be used, thus putting it under spiritual protection.

In these texts, movable and real estate assets are listed in order to preserve their function. The texts can also provide details about officials, inspectors and repairmen needed and what salaries they should make. Furthermore, if it is a foundation from which food is distributed to the poor, the text should include details about foodstuffs, their quantities and annual amounts, the cooks’ fee, the amount of mutton to be used per day, the weight of the bread after cooking and other considerations.

Muslims have long donated items to charity to order to benefit from the promise of the above hadith, thus immortalizing their names in history. Similarly, states have supported foundations by encouraging many public services to continue to be carried out in this way.

The Ottomans developed and preserved this tradition and established very much a foundational civilization in the strictest sense.

Almost every one of means in the country, especially the sultans, aimed to establish a foundation, and cities captured as a result of conquest were largely improved by their work.

When Istanbul was conquered, for instance, Sultan Mehmed the Conqueror made great efforts to improve the city, which he declared as the capital of his empire. He also encouraged other statesmen to restructure the city.

Mehmed II established a foundation under his own name for those properties he took as booty of war – in particular, the Hagia Sophia Grand Mosque. Likewise, his son, Sultan Bayezid II, also built many works and donated them for the benefit of the people.

For instance, Istanbul's famous Spice Bazaar was built to generate rental revenue that would then pay for expenses of the nearby Yeni Mosque (also known as Valide Sultan Mosque), in Istanbul’s Eminönü district. The mosque was ordered by Safiye Sultan and completed upon the orders of Hatice Turhan Sultan. Thanks to the rental income of the bazaar, both the needs of the mosque were satisfied and aid was provided to the needy in the region.

The term "waqf" usually conjures the idea of a mosque, hospital, school, fountain, cemetery or bridge. However, the archives reveal that more unique foundations were established in the Ottoman era.

Many foundations seem striking today, such as one covering the payment for items broken by servants, taking children on picnics, freeing slaves, paying others' debts, housing widows, giving shoes and clothes to poor students, distributing ice to the poor in summer, cleaning lakes, cleaning walls and caring for lepers.

Others donated wedding dresses for poor girls to wear for marriage ceremonies, while others donated necklaces. There was even a foundation that launched an aid ship to traverse Lake Van offering alms. One charitable old pasha dedicated fruit trees to people in h,istoric town of Iznik so that they could eat, while a porter in Aydın endowed putting snow in the reservoir of a fountain for three months so that the water could continue to flow, cooling the temperature in the summer. Money foundations were established to help those seeking loans when they were short of cash, and libraries were built at a time when books were expensive.

In 1908, the looting of foundations began with the coup of the Committee of Union and Progress (CUP), and this continued as the legal system evolved under the republic. Madrasas and zawiyas (Islamic monasteries) were closed, and all of their property in the status of a foundation was confiscated. However, this went against personal rights.

The liquidation of foundations was initiated in order to destroy the power of the segments representing traditional society. After a while, however, in 1935, the Foundations Act was enacted. Despite the name, it changed the historical definition of a foundation and was not based on any religious provisions or principles, allowing for no spiritual protection.

Ali Himmet Berki, head of the legal department of the Supreme Court, was a famous jurist who witnessed both empire and republic periods. Describing what happened, Berki stated: “At one stage, the foundations were abolished and liquidated out of the enmity for these endowments nurtured by those who did not harbor the spiritual inclinations that prompted people to build foundations and their benefits to the ummah (community). In 1929, a specialist lawyer named Hans Leeman was brought from Switzerland. Although he did not know Shariah law, he expressed that the old foundations should be preserved as they were. However, the government did not heed his advice.”

First, a new law deemed many foundations should be either sold or rented out. In an unprecedented act, more than 230,000 foundations in Istanbul, amounting to billions of Turkish liras in today's value, were rented out for dirt cheap.

As far as it could be determined, the number of foundations sold in the first 16 years of the Republican period came to 8,562.

Among them, there were also foundations established by non-Muslims. Thus, the foundation civilization, which left its mark on 1,400 years of human history, was liquidated in a sad and disgraceful way.

Despite many financial difficulties, the Ottomans always avoided violating property rights and ensured the spiritual protection of endowed works.