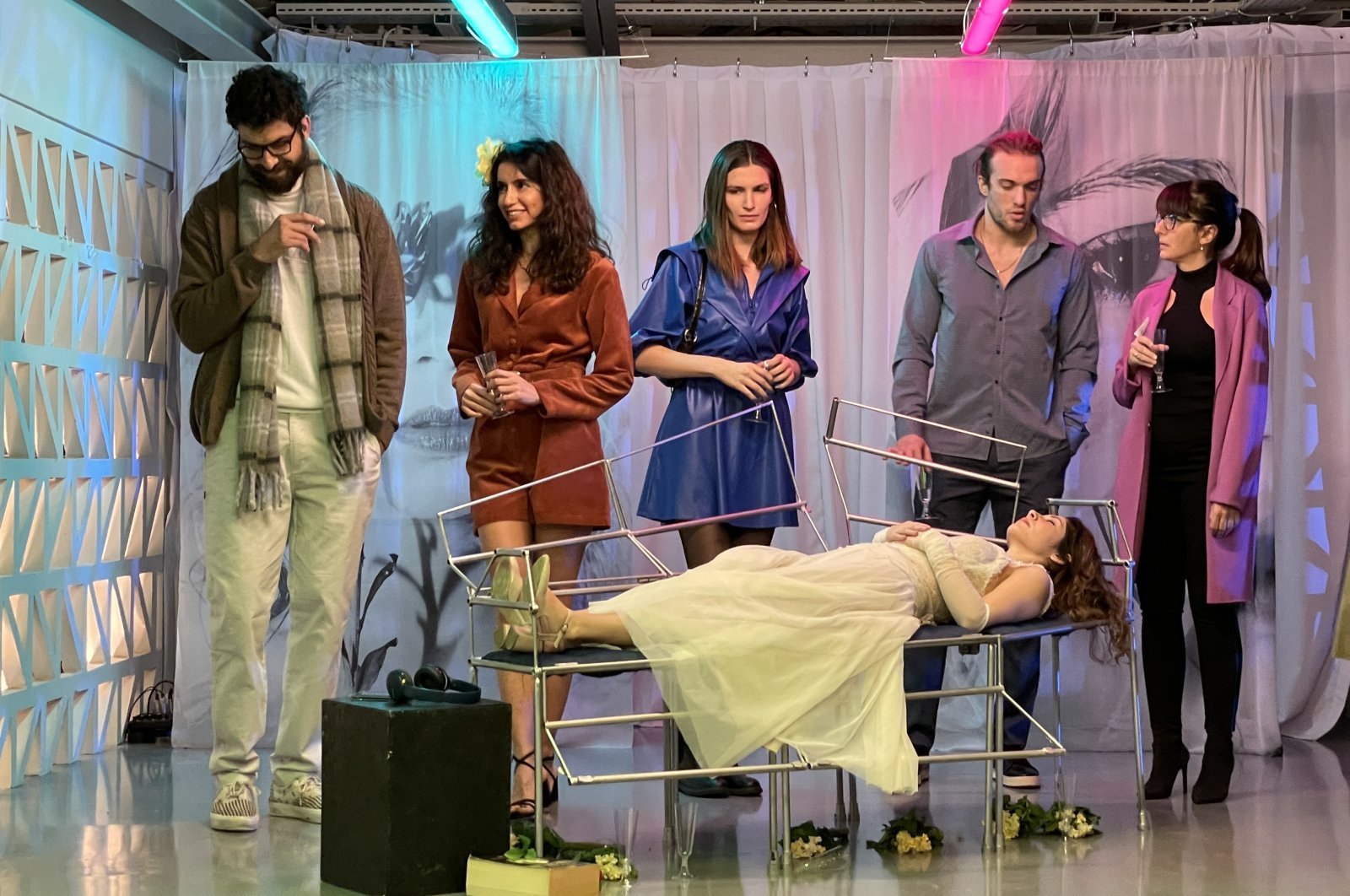 The original play ‘Cease and Desist. Love. And Be Silent’ will be showcased in English by the troupe 7 Jealous Fools this Friday and Saturday at Istanbul’s new social complex Müze Gazhan

Conceived during the COVID-19 era of lockdowns, “Cease and Desist. Love. And Be Silent” is a labor of love between American playwright Sean Michael Welch, director Ahu Sıla Bayer and the cast members themselves as they co-created the piece virtually from across the world.

This unique play, which is 65 minutes long and consists of a single act, is based on the fictitious character of Hürmüz, a performance artist who transforms her own funeral into a performance. From a coffin installed in the center of the stage and set in an exhibition hall, Hürmüz confronts past lovers and jealous friends she once competed with. The parody serves an introspective of the affects of jealousy on relationships.

Furthermore, if you haven’t been yet, Müze Gazhane is a spectacular complex for the arts and science located in the Kadıköy district’s Hasanpaşa neighborhood. Centered around a renovated historical gasworks building, hence the name, Gazhane as it is referred to in short, the vast complex houses multiple museums, dining and performance venues within its spacious indoor and outdoor grounds.

I had the opportunity to discuss the upcoming show with director and 7 Jealous Fools founder Ahu Sıla Bayer as she gets ready to premiere and perform in the show this week. For the past 20 years, by trade, Bayer has actually been an English language instructor teaching at schools such as Boğaziçi University School of Foreign Languages, but she has also been working in theater as an actor and dancer at the same time. The 7 Jealous Fools troupe is a part of her company called ActEnglish, which she created to produce her own theatrical shows in English.

“Cease and Desist, Love and Be Silent” is the first theater play launched by the company and American playwright Sean Michael Welch wrote it particularly for the team, tailoring the script and characters according to each of the actors on the cast. The co-conceiving and writing process took place during times of lockdown and was a collaborative effort between all of the members of the team.

The team consists of Buket Gülbeyaz, who plays Hürmüz, and Miray Beşli, who along with Gülbeyaz trained at the Actors Studio in New York, where they also connected with Welch. Beşli plays one of the most colorful characters which is Lucie; a dreamer, innovator and painter that is crazy in love with and on the verge of marrying David, who is played by Oğuz Beşli - who will also be starring in “Nietzsche’s Umbrella”, a feature-length film about to start shooting. Then, there is Armağan Oğuz, an established actor with multiple television and film roles. Also an integral part of the team is Zola Blades, a 15-year old expat and British conservatory student currently living in Turkey. As mentioned, company founder and director Bayer is also performing in the theatrical act and other members of the troupe include Baran Andıç and Yağmur Elmacı.

Welch is a prolific playwright with more than 250 plays under his belt and many of which have been performed all over the world. With showings of the performance in English this Friday and Saturday (Jan. 14-15) at Gazhane, Welch can now add Turkey to that roster.

Later this month, the play will also be performed in Turkish under the title: “Teslim Ol. Sev ve Sessiz Ol” on Jan. 28 to 29 also at Gazhane.

The absurdist plot for “Cease and Desist, Love and Be Silent” is actually loosely based on the Ottoman myth of “7 Kocalı Hürmüz” (“Seven Husbands of Hürmüz”), which is a comedic fable-like tale of a woman who had seven husbands she juggled throughout the week. The strong yet outrageous female figure of Hürmüz serves as the muse for this play aiming to emphasize the empowerment of women in romantic relationships in the post-modern world.

As for Gazhane, opened in July of this year, you might want to get there early, because in addition to hosting live theatrical and musical performances, in multiple indoor and outdoor spaces, the complex is also home to the Climate Museum (Iklim Müzesi), the Caricatures and Humor Museum (Karikatür ve Mizah Müzesi), the Children’s Science Center (Çocuk Bilim Merkezi) and a library.

Keep in mind that for entry to the premises, a HES (Life Fits Into Home, in Turkish “Hayat Eve Sığar”) code – which is used by the Health Ministry to track down COVID-19 positive people – is required and to watch the show you must have a vaccination certificate or a negative PCR test result taken within 48 hours. The performance starts at 8:30 p.m. and tickets are available on Biletix.