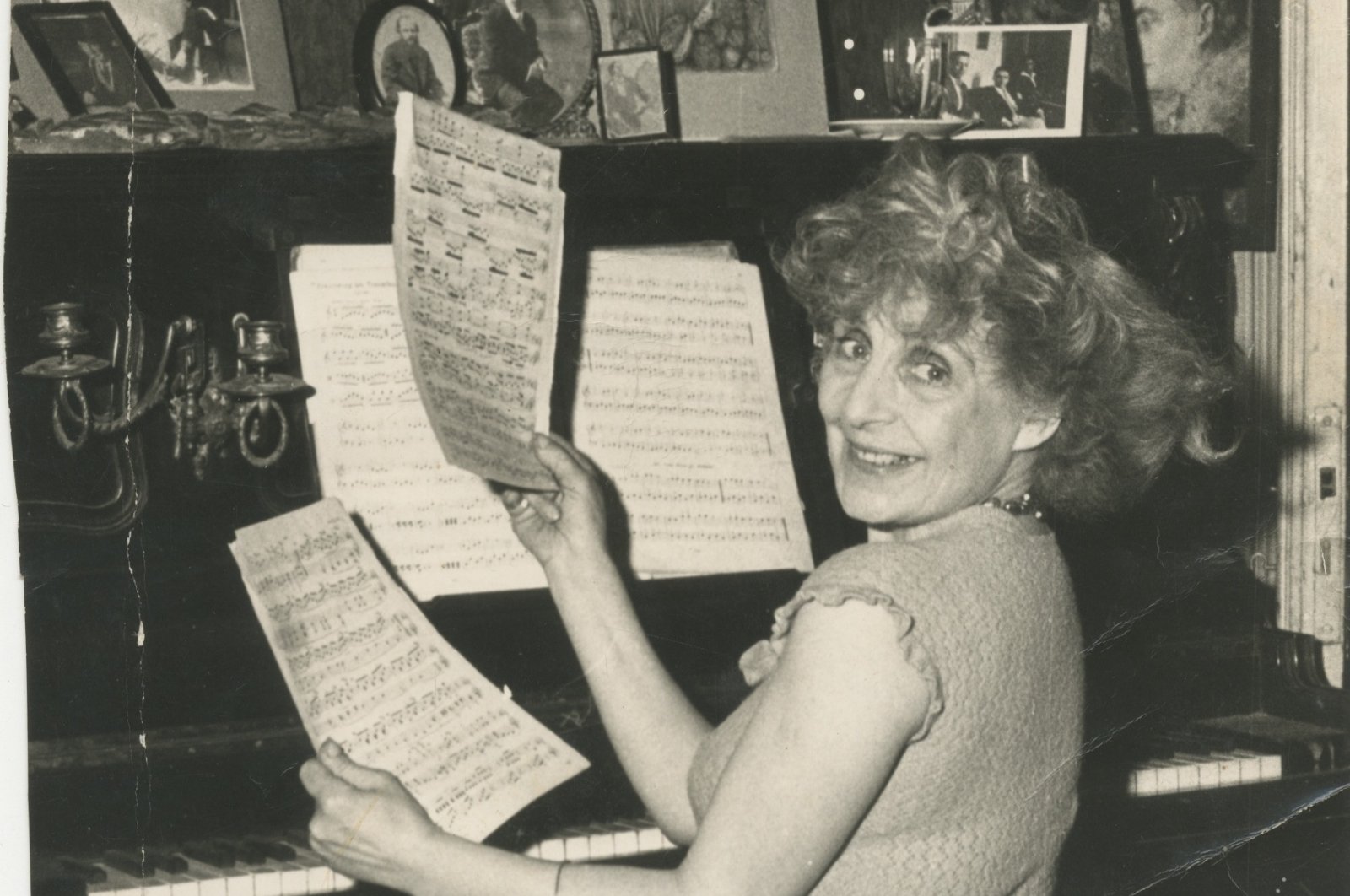 Aliye Berger poses with pages of a music notebook in front of her piano. (Courtesy of SALT Research)
by Hakan Arslanbenzer Apr 30, 2021 11:35 am

Having trained in several different fields from piano to painting as a member of the famed artistic Kabaağaçlı family, it was Berger's expressionist engravings that made her a legend

Most people tend to believe that creativity is a gift of nature rather than a product of nurture. Arts are generally considered personal to the very individual who performs them. Yet, we are all aware that there have been artistic dynasties throughout history. It’s hard to find a good reader who hasn’t heard of the 19th century British poets and novelists the Bronte sisters – Charlotte, Emily and Anne. Even the first name of authors are the same in some situations like that of Alexandre Dumas pere et fils, or father and son. The father Dumas is the more famous one for his historic novels such as “The Count of Monte Cristo” and “The Three Musketeers.” Yet, the author of the stunning novel “La Dame aux Camelias,” which inspired Giuseppe Verdi for his outstanding “La Traviata” opera, is the son Dumas.

There are also similar dynasties in visual arts. The Holbeins, the Brughels, the Le Bruns, the Pissaros and the Rossettis are worldwide famous examples of artistic dynasties. In Turkey, too, there have been some particular families with a significant number of members who gained success and fame in arts. I suppose the most Turkish artistic dynasty is the Kabaağaçlı family that includes the famous author Cevat Şakir – who uses the penname Halikarnas Balıkçısı (Fisherman of Halicarnassus) – and visual artists such as Fahrelnisa Zeid and Aliye Berger. Their niece Füreya Koral was also a ceramic artist.

Among all names in the list of artists belonging to the Kabaağaçlı artistic dynasty, perhaps the most underestimated one is Aliye Berger, since her two siblings shadowed her with their fame.

Aliye Berger was born on Dec. 24, 1903 on Istanbul’s Büyükada, the largest of the Princes' Islands in the Marmara Sea, to an elite Ottoman family. Her father Kabaağaçlızade Mehmet Şakir Pasha was appointed as the Ottoman ambassador to Greece. Şakir Pasha married Sara Ismet Hanım, whom he met in Crete during his duty.

Aliye’s paternal uncle Cevat Pasha was the grand vizier of the Ottoman state from 1891 until 1895. When he was dismissed and exiled by the sultan, his brother Şakir felt resentful against the sultan and refused a mansion on the Bosporus and moved to Büyükada. He lived in seclusion on Büyükada with his children, who he encouraged to deal with fine arts and reading.

In 1913, an unfortunate incident happened and Cevat Şakir killed his father accidentally. After that, Cevat Şakir was charged and imprisoned, while his mother and his four sisters, including Fahrelnissa and Aliye, had to struggle with difficult conditions.

However, Aliye was lucky enough to get a good education thanks to her family’s social status. She attended Notre Dame de Sion high school, a private Catholic school offering education in French. However, she was unable to graduate from that school because it was closed when World War I broke out in 1914. Berger describes the Notre Dame de Sion as “a damn place, which I hated.” She received private lessons for piano and painting. Berger graduated from high school by passing the special exam held by the French Embassy in Istanbul. She married Karl Berger, who taught her violin in 1924. Actually, they lived together for 23 years before their official marriage in 1947.

The story of the Bergers as a couple is also interesting. At first, Aliye’s love for Karl was not mutual. Karl was said to have affairs with various women in different districts of Istanbul. He considered leaving Istanbul forever in order to escape from Aliye. On the other hand, Aliye took an aggressive approach to keep her man, which caused her to commit a severe crime. She took her uncle’s gun and went to the house where Berger was living. She fired her gun and injured the woman who opened the door. It’s shocking that Karl coupled with Aliye afterward. More interesting is that she served only 35 days in prison since the “madame” she shot survived and the court took Aliye’s age, clean record and family reputation into consideration.

Karl Berger died of a heart attack just six months after his official wedding with Aliye Berger. His obituary uncovered the fact that Karl Berger had converted to Islam and changed his name to Ömer Baki. Aliye had his husband buried next to his father’s grave.

Aliye began painting and engraving after her husband died. She was in her forties, which makes her story more interesting. She visited London to train in visual arts. She was always fond of painting but delayed her pursuit. At first, her father didn’t support her love of painting because of the nudes her elder brother Cevat Şakir brought from Europe. Second, she was in love with Karl Berger and played violin, which became another obstacle between her and painting. In fact, Karl’s death was the stimulus behind Aliye’s return to visual arts. She was in deep sorrow when her sister Fahrelnisa Zeid showed her some engravings and had her visit London to take art training at John Buckland Wright’s workshop.

Finally, Berger opened her first solo exhibition in Istanbul in the early 1950s with sculptures and engravings, which makes her the first-ever engraver of Turkey. She was 48 years old and was engaged in arts for monetary reasons.

Berger won the Yapı Kredi Bank’s “Work and Production” Prize in 1954 for her “Sunset” oil painting, followed by a second-place prize at the Tehran Biennial in 1955. She opened 48 exhibitions and produced some paintings but mostly, she created engravings with a lyrical but expressionist style.

Aliye Berger died on Aug. 9, 1974 in Büyükada, Istanbul. Several posthumous shows were held to represent her art, including one by the State Fine Arts Academy in 1975 and one by Yapı Kredi Bank in 1986. Three of her works are exhibited at Albertina Museum, while four others are kept at the Istanbul Painting and Sculpture Museum. On Dec. 24, 2017, Google displayed a special Doodle to commemorate her 117th birthday.