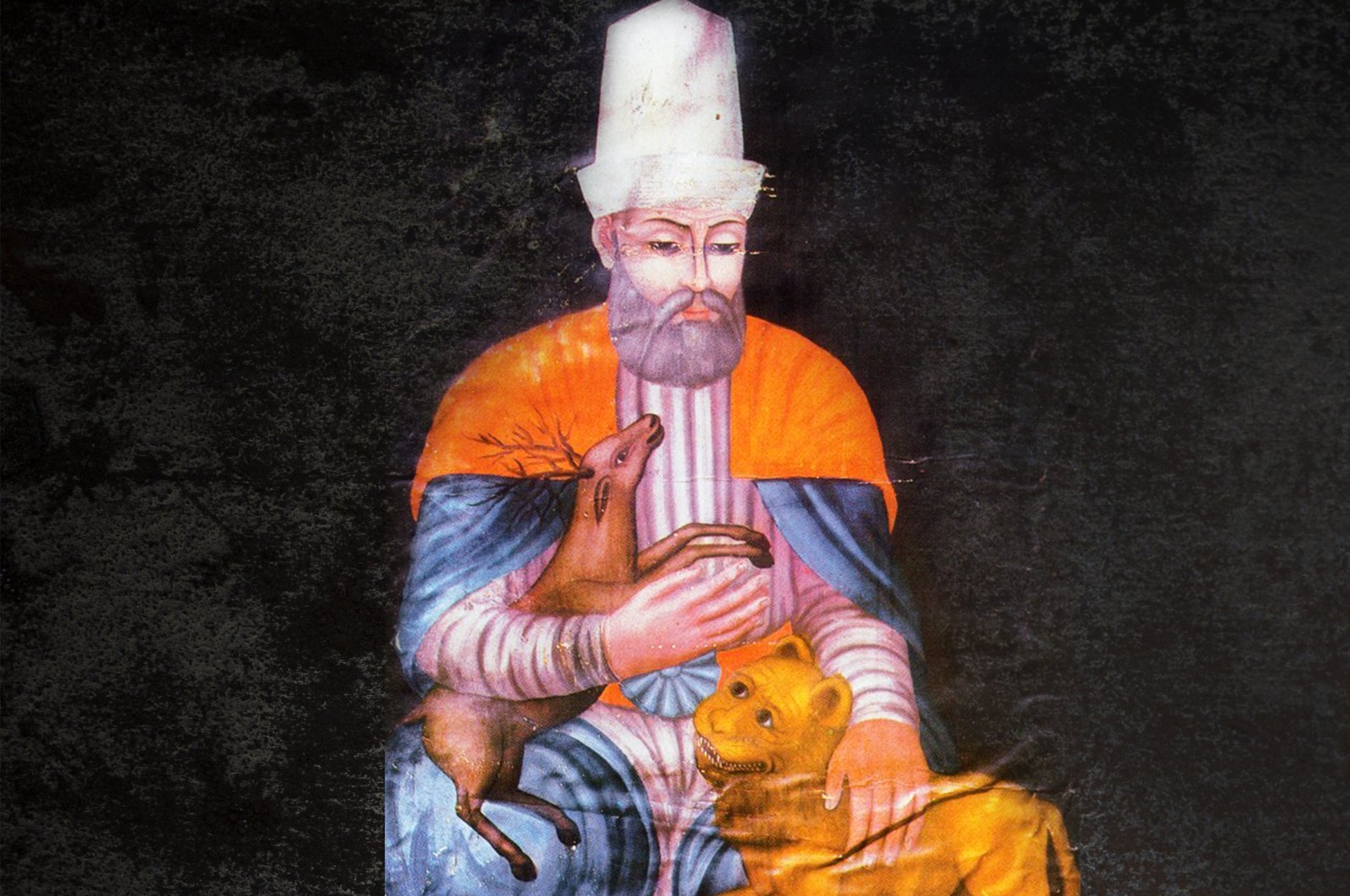 A general depiction of Haji Bektash Veli, holding a deer and a lion.
by Hakan Arslanbenzer Aug 13, 2021 1:55 pm

Not much is known about the Muslim mystic, who lived and taught in Anatolia, since his origins are shrouded in mystery and his biography generally based on legends

When the Seljuk armies began to conquer Anatolia in the 11th century, they brought more than just warriors to the new land. The Seljuk Empire had vast populations of Oghuz and Cuman tribes settle on the great plains and steppes of Anatolia. Archeological findings include the remains of the Cuman warriors, who lived and died on Anatolian soil, especially in the eastern Anatolia region, after they were hired by the Byzantine Empire and Georgian kings as mercenaries. However, these Cuman mercenaries were Christian in belief even though the newcomers of the 11th and later centuries were Muslims with some pagan traditions.

The Turkish armies helped transform Byzantine Anatolia into Turkey, and the Turkish tribes of all kinds, including mainly the Oghuzs and Cumans, were also transformed socially and culturally. The transformation of the Turkish tribes was from the nomadic to the urban, from the oral tradition to the written language, and from syncretic beliefs to the mainstream Islamic faith.

On the other hand, Turks influenced the Christian groups in Anatolia, too. Though there was no coercive conversion of faith in Anatolia, Turkish religious groups, including Sufi orders, held a continuous campaign to convince people to convert.

Among these Sufi orders, the “Horasan erenleri” (mystics of Khorasan) played a crucial role according to some historians and written legends. Since the Sufis were more tolerant than the faqihs and qadis (official law scholars theorizing and applying the Shariah law), Christians felt more comfortable interacting with the former.

One name comes to the forefront of the Sufi leaders of the early Turkish period in Anatolia: Haji Bektash Veli, about whom we have little historical knowledge – though his legend has endured even after 750 years after his demise, which is remembered in various events this year.

Most of the things written or said about Haji Bektash Veli and the Bektashi order depend on the legendary biographies attributed to him. Real historical knowledge about his life, thoughts and policies is very limited. Today’s Haji Bektash Veli's profile is in fact derived from legendary tradition.

According to the legend, the Sufi philosopher is the disciple of the Khorasan mystics. He founded the Bektashi Order and had a seminal role in the establishment of the Janissary army in the early Ottoman period. The order is still followed among Alevis, especially in the central Anatolia region, including the “Hacı Bektaş” district of Nevşehir province, named after him during the Republican era.

Haji Bektash Veli is considered the most significant Sufi leader to have lived in Anatolia, even greater than big names like Mevlana Jalaluddin Rumi and Yunus Emre, thanks to his role in the spread of Islam in the region. He is generally depicted in an Asiatic humbleness hugging a deer and a lion together, which shows his greatness since these animals are natural enemies.

Historical records contradict the legendary tale of the Muslim mystic in certain matters. For instance, the Bektashi Order was founded only after his death. “Bektashi” means “related to Bektash,” which is parallel to the fact that the Sufi order was established later and attributed to him because of his greatness and fame among the ordinary people of Anatolia. In fact, this fame was developed and generalized by the Bektashi Order. During his lifetime, Haji Bektash Veli was not mentioned in the official historical chronicles. Even the Sufi chronicles didn’t note him as an important Sufi leader. In short, his legend lived among people through oral tradition. Thus, what has been told about Haji Bektash Veli reflects the legendary imagination of his supporters rather than historical facts about him.

The legendary personality of Haji Bektash Veli depicts him as superhuman with heavenly powers exceeding time and place. He received the “secret” from Ahmed Yasawi, the greatest leader of Khorasan mystics who himself had never been in Anatolia, and brought it to the newly conquered land. The legend considers Haji Bektash Veli as the mystical superpower who sealed Anatolia as a land of Islam.

Haji Bektash Veli is deemed as a part of syncretic, or “heterodox,” beliefs against the official, or “orthodox,” Islam. His teachings were a continuance of Malamatiyya, who believed in self-blaming to get a pure and pious soul, and Qalandariyya, which is also related to Malamatiyya since it offers such diverse acts as gambling, wine drinking and using narcotics to maintain a calm demeanor. In today’s Turkish, “kalender” means a person who is tolerant and accepting of people but also one who lives a questionable life and is usually an alcoholic. Though refused by Islamic scholars and disdained by normal people, the Qalandariyya lifestyle was praised in classical Turkish poetry.

Rumor also has it that Haji Bektash Veli was the disciple of Baba Ilyas of Khorasan, the leader of the severe Turkoman uprising of 1240 known as the Babai Revolt in the Seljuk Sultanate of Rum. The revolt is sometimes accused of helping the Mongol invasion of Anatolia since it weakened the Seljuk efforts to keep Anatolia together. Whether Baba Ilyas showed the way to the Mongol invaders or not, the legend says that Haji Bektash Veli learned from him all he needed to learn, though he didn’t help his master in his riot and kept a friendly relationship with the Seljuk sultanate in Anatolia.

History does not say much about Haji Bektash Veli. He is not mentioned in any official chronicle, which shows his lack of influence in the royal circles. The rulers of early Turkish Anatolia paid no attention to Haji Bektash Veli. He would have been considered one of the Sufis wandering around with colorful beliefs and rituals.

According to historian Ahmet Yaşar Ocak, an expert on Sufi legends of Anatolia in what he calls “heterodoxy,” Haji Bektash Veli came to Anatolia from Khorasan as the leader of the “Bektaşlı” tribe, an Oghuz tribe, in the 13th century because of the Mongol invasion of Asia. Ocak goes on guessing that he should have joined the Vafaiyya order led by Baba Ilyas. Haji Bektash Veli’s brother Mentesh also played a role in the Baba’s revolt and was killed during a battle with the Seljuk forces, while Haji Bektash Veli continued to hide before he reappeared in Karayol (today’s Hacıbektaş district) in central Anatolia after the Baba Ilyas revolt ended in failure.

Haji Bektash Veli lived in a small and tranquil Anatolian town, but he sent his men all around the Seljuk soil to collect people for his Sufi order and to convert the Mongols to Islam. According to historians, he offered a non-Sunni version of Islam with many diverse beliefs and rituals. This helped him to be considered as one of the historical leaders of the Alevi sect, though Alevism emerged in later centuries.

His heterodoxy and syncretism made him acceptable in different circles among both Muslims and Christians. The Christians of Anatolia named and praised him as “Saint Charalambos.”

Haji Bektash Veli died in 1271 in the town carrying his name now. The town hosts his tomb, too. There are many places named after him including public schools, neighborhoods and streets.