Tevfik Ileri: The architect of contemporary education in Turkey 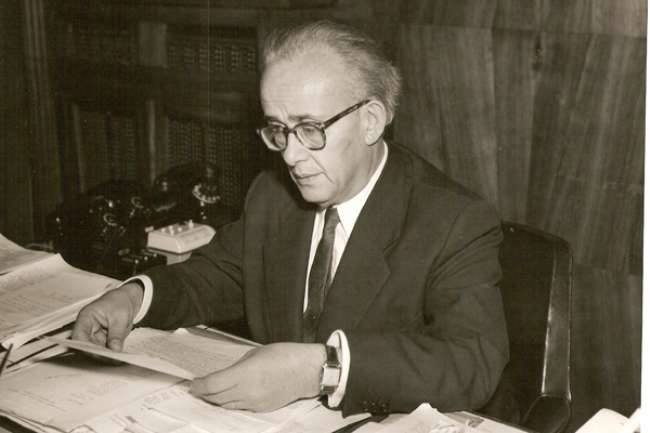 Starting his career as a civil engineer serving in various departments of state agencies, Ileri entered politics and later became a minister, resulting in his imprisonment on Yassıada alongside many other Democrat Party officials

Methods of teaching and content of education at schools have long posed a challenge for Turkish modernization. From initial attempts by Ottoman officials of the 19th century to establish modern schools inspired by Europe to the latest interpretations of educational programs in the public schools of today, both political parties and intellectual circles have been consumed in an exhausting fight to determine the best orientation for schoolchildren. It is obviously a political fight with huge references to religion and secularism.

This fight raised a question, does educational modernization require total secularization, meaning that all religious content is swept from school programs, or should religion remain on the syllabus? Late Ottoman officials found ways to allow both religion and science to be taught together – particularly the natural sciences. For example, they did not close the classical Quran schools known as "mahalle mektepleri" when establishing semi-secular elementary schools. These schools were semi-secular as their curriculum included some religious content. On the other hand, the early Republican approach to education called for the complete exclusion of religion and even attempted to suppress religion by teaching schoolchildren that religion is an obstacle to progress. This lead to silent rejection of secular schools and the creation of secret Quran schools which were run for decades until the Democrat Party (DP) took power in 1950.

The DP pledged to revive religion and restore religious honor; however, they were unable to carry out an educational revolution as their predecessors did. The DP government had to find another way to protect the benefits of modern education while meeting the religious needs of the people. Who would do that in the first place? As a result, then Prime Minister Adnan Menderes appointed an engineer with a religious background and cultural interests as the new minister of education. That man was Tevfik Ileri.

Ileri was born in 1911 in the Hemşin district of northeastern Rize. His father Hafız Celal Bey was a religious scholar while his mother Fatma Hanım was a housewife. Celal Bey's family was known as the “Imamoğulları” (Sons of Imams) in their hometown.

Ileri went to school in Istanbul after his family moved to the city as the country faced economic hardships caused by World War I. Times were so tough that Celal Bey was unable to move to Istanbul after sending his wife and three children, Tevfik, Ömer and Saadet; and the family had to live away from their father for a few years. Luckily, the children were fortunate enough to have their grandfather, a retired civil governor living in Istanbul's Fatih.

Tevfik helped his family by selling cigarette papers to smokers after school when he was attending Gelenbevi Middle School. After middle school, Tevfik and his elder brother Ömer passed the exam to attend a mining school but never enrolled as their mother did not want her sons to become miners. Following a two-year gap, in 1927 Tevfik was admitted to the Istanbul Higher School of Engineering, today’s Istanbul Technical University (ITÜ). The accomplishment demonstrated the young man's talent as he secured a place at the university without having received a high school education.

Ileri graduated from the Istanbul Higher School of Engineering in 1933 and became a control engineer at the General Directorate of Highways in Erzurum, eastern Turkey. He also taught mathematics at schools in his spare time. He even tried to leave engineering and become a full-time teacher; however, the provincial director of education in Erzurum prevented this from happening, informing him that Turkey needed more engineers than teachers.

In the same year, Ileri married Vasfiye Hanım, the daughter of family friends in Hemşin. Their fathers were close friends, and the two arranged a date for their children to get married in Istanbul. Tevfik and Vasfiye lost their first child when it was only 40 days old. In later years, they had three children named Cahide, Ayşe and Cahit.

Ileri worked as the local manager of Public Construction Works in northwestern Çanakkale (1937-1942) and northern Samsun provinces (1942-1950). He was the founding manager of the 7th Roads Region responsible for the roads in four provinces including Samsun, Çorum, Sinop, Amasya and Tokat.

Ileri was a very enthusiastic young man. He was a natural-born orator and politician. Even before becoming an official politician, he was already politically inclined, participating in student protests over small and big matters, including bad food in the cafeteria, petitioning Istanbul Radio to broadcast the National Anthem on a daily basis, requesting a monument to honor the heroism of the Turkish soldiers in the Gallipoli War and protesting Bulgaria's suppression of its Turkish minority. He was arrested with the board members of the National Union of Turkish Students (MTTB) for the Bulgarian incident. Fortunately, then-president, Turkey’s founder Mustafa Kemal Atatürk sent a special telegram that aided in the release of the young men.

Ileri’s nationalism and religious lifestyle went hand-in-hand. Over the course of the 1930s and 1940s, right-wing politicians stood together in order to strengthen their opposition against the iron rule of the People’s Republican Party (CHP). The only party officially allowed was CHP and all other political organizations had to work, or at least look like they were working, under the single-party system. Ileri refused to become a member of Parliament during CHP's rule has he did not approve of the party's policies, especially when it came to ideological and cultural matters. He waited until other democratic parties were allowed to run for power.

Ileri entered Parliament as a delegate from Samsun, where he was working as the local manager of Public Construction Works. Adnan Menderes, the first democratically elected prime minister of Turkey, assigned Ileri as his first minister of transportation. However, after a short time, he was reassigned as the acting minister of education as the government saw a desperate need to improve the area, demonstrating Menderes' great confidence in Ileri. Menderes' government relied on Ileri as a minister politically, too. Ileri was expected to break through to the new generation of students to protect them from "hazardous" ideologies like communism. As a minister, he immediately took action against the extreme left within his ministry, while ironically he was accused by Falih Rıfkı Atay, a journalist famous for his close relationship with Atatürk, of being a communist in his youth. Ileri naturally refused the claims and thousands of college students supported the minister by signing an open petition.

Ileri’s work as a minister of education was outstanding. He opened the imam-hatip high schools, which have a curriculum focused on theological lessons, which CHP kept closed for decades. These schools are still considered his legacy by Muslims today. While the schools were an important ideological step, Ileri's reorganization at his ministry was even more important for bureaucracy. He managed to reorganize the Ministry of Education to work in cohesion and coordination with all its parts around the country. He also tried to enhance the role of the Education Congress and establish democratic management at the ministry.

Ileri founded the first faculty of theology, the Istanbul Higher Institute of Islam. He also supported the foundation of two new universities, the Atatürk University in eastern Erzurum province and the Middle East Technical University in the capital Ankara.

After the May 27, 1960, military coup, Ileri was arrested together with hundreds of DP officials and imprisoned on the Yassıada island. He was initially sentenced to death before his sentence was changed to life in prison. He died on Dec. 31, 1961, from cancer at the Ankara Hospital and he is buried at the Cebeci Modern Cemetery. There are many schools and streets in various cities including Istanbul, Ankara and Rize named after him.