In the workshop: Experience of 2 artists at Cihangir Gallery 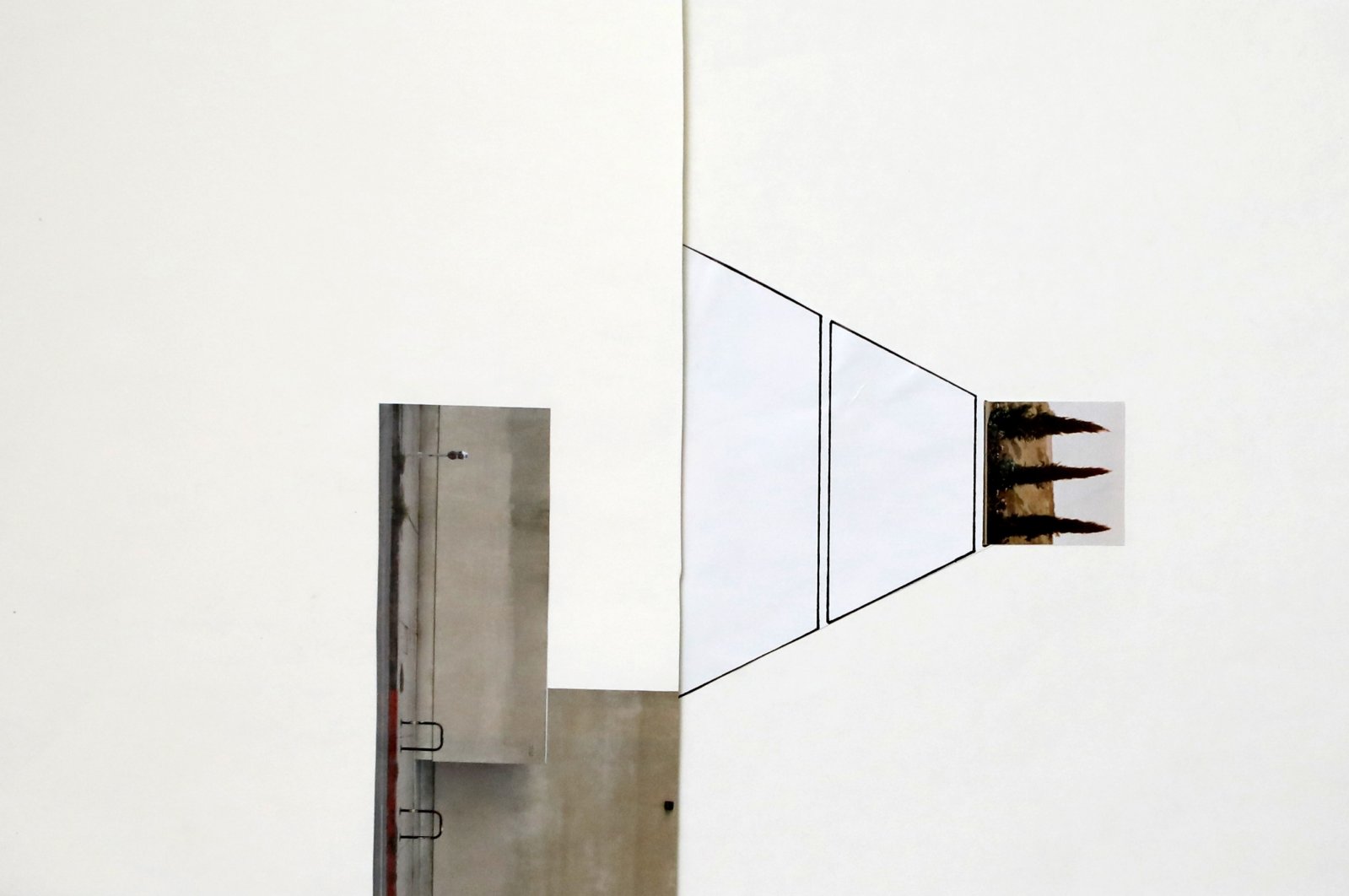 Daire Sanat is a modest apartment gallery in Cihangir, where two artists, Özge Enginöz and Özgül Kahraman, have occupied its former residential space with experiments in visual literacy from Louis Braille to Virginia Woolf

Özge Enginöz is a collagist, and for her project, “The Alphabet: Geometry of the Family,” she has mined passages from the classic English novel “To the Lighthouse” by Virginia Woolf. In the process, her work explores the synonymic notions of seeing, visualizing, imagining, as intimately intertwined with their opposites, obscuration, denying, blinding. The latter, normally used in reference to the paralysis of eyesight, has metaphorical and aesthetic connotations carried by the artist Özgül Kahraman, who, in another section of Daire Sanat, is busy with elaborations and variations on the Braille alphabet, as part of her approach to social, sculptural installation.

In the space that Enginöz created for her practice at Daire Sanat, which is essentially the historic apartment's front salon, she tacked amalgamations of texts, strips of paper with sentences gleaned from Woolf’s classic novel, in both English and Turkish, together with their correlating assemblage of images. Enginöz is a friend to space. She leaves objects hanging out in the open, something akin to the broad interpretability of Woolf’s critically dynamic prose. What she exacts is a fresh reading, so as to consider the relationship between text and image, not for their outward manifestation, but as they interact in the mind.

A reader is captivated by a story when they can see the settings and characters as living, moving figments of experience, which act and are acted upon. Literature also has the capacity to stimulate the reader's sense of hearing, where pitch-perfect dialogue and the sound of the language can make for a particularly spellbinding grab of a tale, or simply as an evocation of writing. And it is just the question of what is writing itself that, perhaps, Woolf and Enginöz are discovering, as their paths meet in the world of art. The linkage between the written word and representational images is a puzzle for their apparent separation on the page.

Enginöz, however, crafts her collages with a refined sensibility for the edge of representation, its sharpness definite, yet composed within a field of figurative abstraction. There is one pair of collages that hangs above a peculiarly idiosyncratic Woolf phrasing in which her narrator suspects “some thorn in the tangle of this thought.” In response to the text, Enginöz placed the picture of three tall cypress trees sideways in the middle of an empty, white piece of paper. There are two panels that could be something like walkways or windows leading to the bucolic landscape.

To read is to imagine

There is an air of early 20th-century surrealism to the works of Enginöz, a movement in art that ran deep through the social circles of Woolf’s contemporaries. It is uncanny, in fact, and speaks to the deeply resonant effect of Woolf’s writing on humanity's collective, creative consciousness, that nearly a century following her penning one of her best-known books, she has infiltrated her Turkish readership in translation to the extent that Enginöz, an artist born in 1981 in the western city of Balıkesir would meticulously extract phrases from her 300-plus page modernist sprawl to integrate into her artistic practice.

As a culmination of her work for “Alphabet,” Enginöz planned to craft a video book, based on the collages and excerpts that she has prepared and exhibited during the course of the current, two-month open workshop series at Daire Sanat. In her artistic practice, and how she holds space, Enginöz is confident in her visual work and her literary research. The result is a light touch, perhaps seeming amateurish and given to persistent imperfection, but hers is honed, disciplined artistry that gives space to the viewer-reader who, while eyeing her loose, complex collaged images on paper might hear Woolf's voice or the scratching of her pen.

A reader is, in a sense, blind to the inner workings of their storyteller. They interpret the signs of language visually, firstly, listen to them in their thoughts, and depending on the degree of mental activity, imagine the scenes as they are told in the silent, invisible realm of writing. That is the departure point from which the artist Kahraman began to produce her series, “On Three Possibilities.” The first piece among her works at Daire Sanat, located immediately beside the entryway to the compact gallery space, is a clear sheet on which she affixed buttons correlating to the Braille for the Universal Declaration of Human Rights.

The delicacy of her piece is in its transparency, the thinness of its material and subjection to foot traffic as it lies splayed across the wooden floorboards of the inner-city apartment gallery in Istanbul. There is a redolence of social action in Kahraman, who is making an apt point with respect to the art world's often insular reality in relation to those outside of it, who are as good as blind to some of the mimetic esotericism of modern and contemporary art and its history on the fringes of Western culture in Turkey. That said, however, her works are playfully approachable, as she continues to elaborate on how their nuances affect seeing eyes.

To feel is literary

There are pearls of insight set throughout Woolf's novel that speak not only to the particular story of “To the Lighthouse,” which at face value is a light family drama. Woolf, like the fine artist that she was, used the novel as a medium to convey the conceptual ambiance of the illogical and introspective times in which she lived, in step with her fellow modernist novelists, among them James Joyce, or her predecessor Marcel Proust. So, Enginöz has enacted a parallel momentum, investigating the problem of sight, as a multivalent faculty involving multiple processes of reflection not merely physical but also psychological.

There is one piece that hangs on a metal clip as part of the "Alphabet” installation by Enginöz in which she quotes the following passage from Woolf’s novel, “All that in idea seemed simple became in practice immediately complex.” It is paired with a network of images that juxtapose abstractions on domestic textures with the remote vistas of inaccessible wilderness. At a point, she traced the outline of a mountainside with two images that, like the complement of works by Kahraman and Enginöz together, excavate the process of interiority which is normally subdued when considering the act of seeing as a projection, or outward connection.

The fragment of Woolf continues to describe how the visual experience of the sea is a different world for the swimmer than that of someone perched on a cliff. The contrast has a resonance with the works of Kahraman, who, among her many variations of sculptural texts written in Braille, produced some purposefully unreadable kinds. As a result, they cannot be seen but felt. The counterintuitive balance is perhaps the source of desire, that nagging feeling that is as universal as perception itself, where everything seems slightly out of reach, as traces of its light, shape and remembrance play on in the pinball machine of the brain.