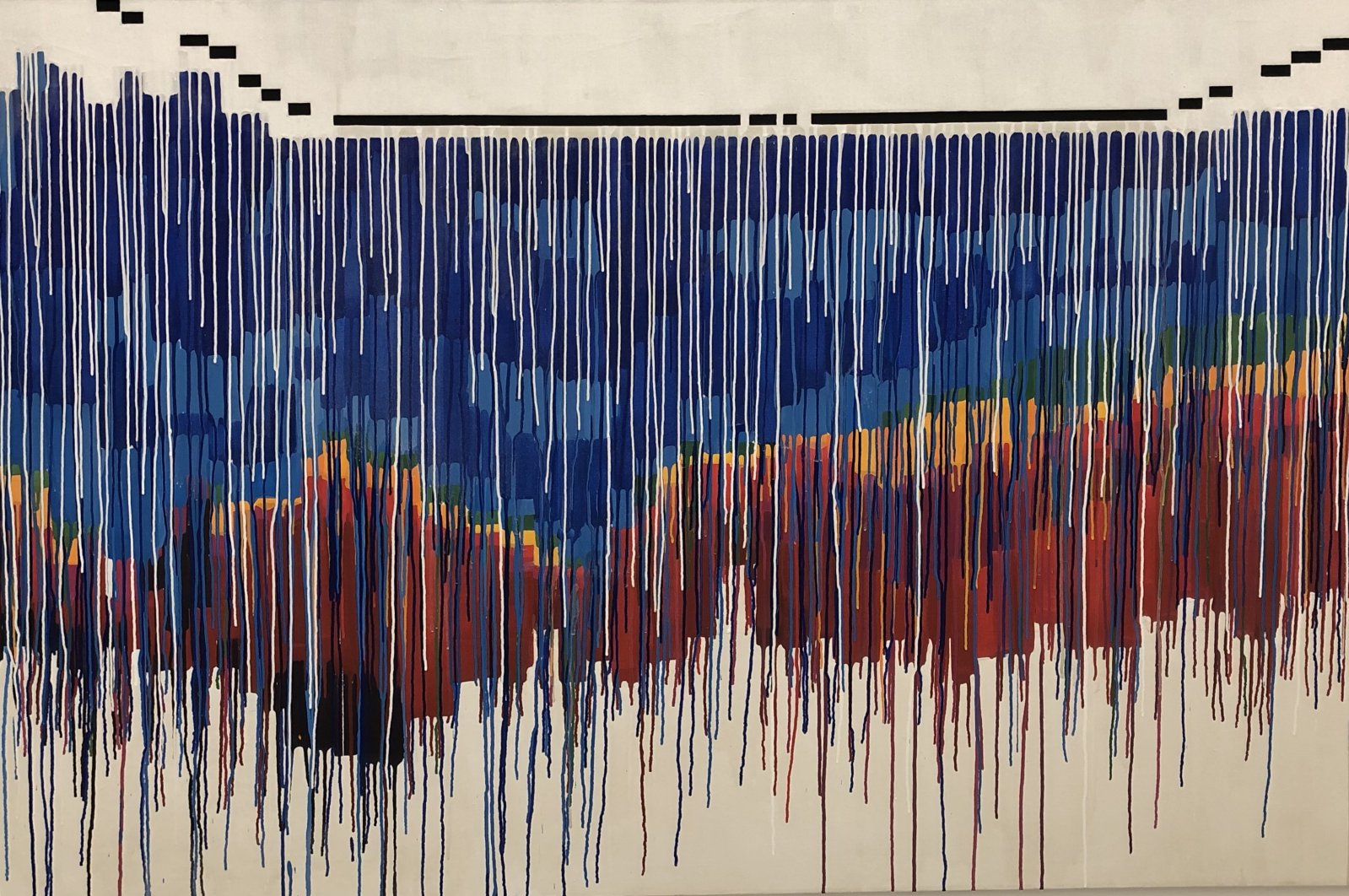 A sprawling retrospective of the late, postwar German artist KP Brehmer at Arter is a precious curation in Istanbul’s art history by Selen Ansen, encompassing an impressive sweep of the artist’s life work

“The Big Picture” is an exhibition in Istanbul, at the new Arter museum, which, although it opened in the fall of 2019, remains a fresh locale on the art map of a city that has more tricks up its sleeves for intrepid localists and globetrotters out for that vital cultural experience, where the perceptual meets the conceptual. Its curator, Selen Ansen, who has shown her knack for group shows and performance art at the spectacular building along an innercity freeway in the Dolapdere quarter of the city’s Beyoğlu district, exhibits a slew of works spanning the career of German artist Klaus Peter Brehmer with a special breadth and tact that could very well appear in the halls of the Museum of Modern Art (MoMA) in New York or the Tate in the United Kingdom.

Exhaustive as it is intriguing, “The Big Picture” does justice to the idea of seeing as a form of reading. KP Brehmer dealt in the language of graphs and charts, compositions and adverts with a characterful poise, stimulating his seers with a peculiarly German sensibility for social reconciliation in an era of worldwide reform. His artwork is a nod to a generation of progressive Germans who emerged in the decades following World War II as the world leaned forward with so many unanswered questions in the wake of unprecedented, mass, criminal atrocity masked by the guise of war and its moral personification as the forces of good and evil.

Born in 1938, the year Europe braced for full-scale armed conflict under the shadow of Third Reich imperialism, KP Brehmer came to embody the growing pains of a nation that had regressed against the global momentum toward the democratization of national citizenries. It is a paradigm that remains as prescient as ever, having defined much of what continues, unresolved, in its aftermath, however, obscured by the propaganda of ethnic ideography. Before the erection of the Berlin Wall in 1961, Brehmer had his start copying and reproducing documents, becoming a reprography technician. His early training is fundamental to his oeuvre.

The creative liberalism of the 1960s in West Berlin was a formative time for Brehmer, where he crystallized his place among the city’s artist pantheon, chumming around with names now famous, including Joseph Beuys and Naim June Paik, both of whose works are presented by Arter at the concurrent show, “For Eyes That Listen.” Since his collaboration with Rene Blok in 1964, Brehmer has been associated with specific art movements defined as neo-dada, pop, and capitalist realism. Into the 1970s, particularly beside curator Manfred Schneckenburger, Brehmer addressed the art world from documenta 6, a quinquennial contemporary art exhibition in Germany, on the topic of social realism.

Brehmer’s complex, distinctive relationship to political or social didacticism as an artist might best be understood by his name. He discarded his name Klaus Peter and went under the initials of KP. KP stood for the initials of the Communist Party (Kommunistische Partei) in Germany, to which he never belonged. It is often the case that artists utilize the language of sociopolitical concern, only to subvert its intent and meaning towards a more subjective turn, emphasizing individual and collective reinterpretation. Its catalyst for change therein would be as unpredictable as the mass of experience out of which it is molded, reflecting something of the hypocrisies of objective human self-reflection.

To imagine a mass

The cultural implications of free-market capitalism have arguably never been so starkly posed than on either side of the Berlin Wall. In the curatorial assessment of Arter, Brehmer is not so much didactic as he is “educative” which is the word they use. In other words, his is not a superficial art, a surface design by which to see the profane and mundane more abstractly. Instead, Brehmer assumed and adapted the power play of civilizational oneupmanship, positioning himself, even if with critical reflexivity, enjoying all of the privilege that comes with being a white, male West German citizen in the late 20th century.

One of the opening pieces at “The Big Picture” is a pair of flags on the wall, bearing the German colors, only with their distribution on the canvas adjusted according to proportions of wealth disparity. The piece is reminiscent of work by the Germany-based Turkish artist duo Özlem Günyol and Mustafa Kunt, especially their “Materialistic Painting” series from 2018 in which they presented the value of a coin flatted over a canvas for a decidedly pop art effect. Within the image, these works could be said to express the tenets of capitalist realism, which set out to justify the role of art in transforming daily, consumer aesthetics to reflect new ideas.

In 1963, in his mid-20s, as a newborn chrysalis in the humming contemporary art field that was postwar Germany, Brehmer bought a printing press. With applied techniques in linocut, woodcut and metal stereotypes, he produced his “cliche” prints. They enjoyed broad exposure at Rene Block’s gallery by the time Brehmer exhibited, “Trivial Aesthetics” in 1965. The idea of presenting utterly copyable material, images and styles in an art context was preceded by the French art world, by such artists as Yves Klein and Marcel Duchamp. And yet Brehmer stood out for his meticulous approach to redrafting the designs of national industries.

Drawn from the KP Brehmer Collection and Estate in Berlin, the first hall of the expansive multiroom course of “The Big Picture” includes a series of stamps. Brehmer would return to certain themes, from his critique of imperialist American capitalism from Vietnam to the White House, and Russia’s late communism within the same frame as that of his more reflexive sensitivity, to the image-generation that has continued to reference the portraits of Adolf Hitler or Johann Wolfgang von Goethe as fundamental to the visual consciousness of the prevailing zeitgeist. Berlin is not immune to his visual criticism, which going back to 1965 he framed via a postcard rack.

There is a “cliche” work, titled, “Graziella,” wrapped in lace, based on the 1852 novel by Alphonse de Lamartine, which has its own history of influencing paintings, and exudes an air of soft intercultural appropriation between Western nations, as a kind of romance told through fictions, poems and paintings. The prolific energy of his early years is cleanly exhibited at Arter, conveying the productivity of the young Brehmer at work with his printing press. The overall aesthetic is characteristically pop, yet, by collaging and overlapping alternatives to linear logic, he affects a neo-dada chaos that could be well suited to the realities of disaster capitalism.

As a man commodified

The psychology of consumer possession establishes a clear line from Brehmer at a time when Andy Warhol was enlightening the art world into a mainstream business that might be confused by an outsider as another form of cultural advertising. His varicolored studies of eyes and canned products appear to have a direct link to Warhol; yet it is not rudely stolen out of the archives of old, but a fresh, contemporary parallel. There are other art history quotations more expressed, such as in his 1971 piece, “Colour Geography (Shades of Blue) After Mondrian” during an era in his career, toward the early 1970s, in which he carefully trained his vision on the nature of color as a prosaic, objectifying device of coded description.