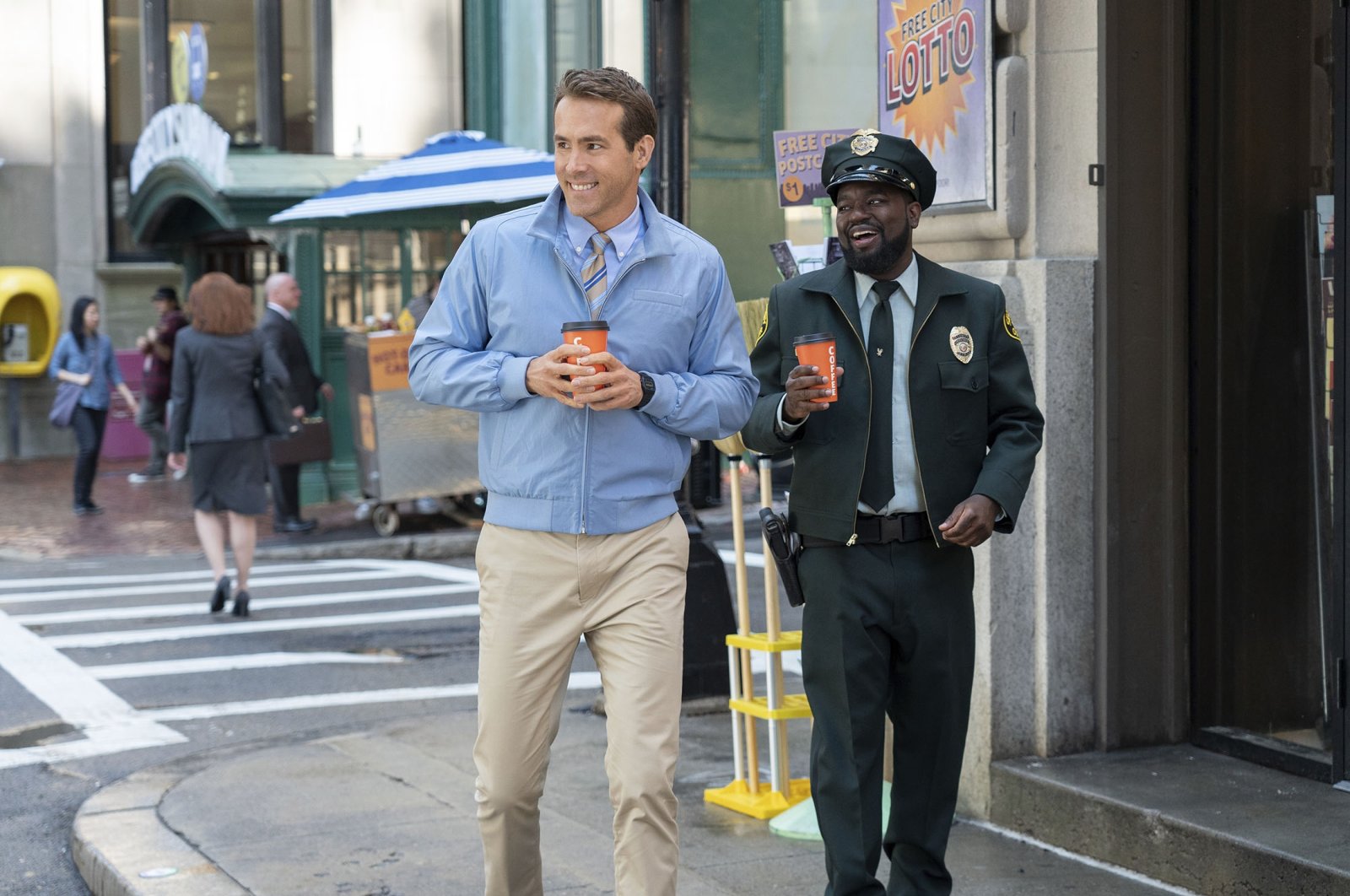 Ryan Reynolds (L) walks down the street with Lil Rel Howery in a scene from the film "Free Guy." (20th Century Studios via AP)
by Associated Press Aug 08, 2021 5:57 pm
RECOMMENDED

Will you take the blue pill or the red pill? Wait, wrong universe. However, that is the premise of a growing body of movies in the 21st century. Be it virtual realities (VR) like "Ready Player One," or simulated realities from constructed sets like "The Truman Show," from "The Matrix," to the "Inception" and even "Wreck-It Ralph." Pop culture, artificiality and video games all intertwined, to simulate the digital age that we live in.

But if anyone was ever living a lie, Free City resident and banker Guy (Ryan Reynolds) is. Every day he picks a blue shirt and khakis from a closet neatly ordered with them. He orders the same coffee. He even, like Truman, has a cheery goodbye: "Don't have a good day. Have a great day."

It's the same thing over and over. But from the start, it's obvious something is very far from right. Every day, for example, Guy's bank is robbed at gunpoint. He and his security guard friend, Buddy (Lil Rel Howery) calmly lie down on the floor each time and discuss their after-work plans.

The reveal isn't a shocker: "Free City" is a virtual reality game and Guy is a background character – a non-playable character or NPC. In the expansive digital universe, Guy is the lowest of the low, an (8-) bit character in a violent cyber city. He's an extra who happens to be played by an A-lister.

"Free Guy," which opens in theaters Aug. 13, is a clever if increasingly familiar kind of meta-movie that delights in seeing a videogame from the inside and turning a background character into a hero.

It's more balanced and better than Steven Knight's bold but off-kilter "Serenity," with Matthew McConaughey as a fishing boat captain who turns out to be a videogame protagonist. But "Free Guy" is also blandly predictable and fails to unlock the levels its high-concept premise might have opened.

Directed by Shawn Levy from a script by Matt Lieberman ("Scoob!," "Playing With Fire") and Zak Penn (who co-wrote "Ready Player One"), "Free Guy" gets a significant boost from Jodie Comer, who plays both the VR architect Millie and her in-game avatar, Molotov Girl, and proves a force in either dimension.

There are also gleeful, over-the-top performances by Taiki Waititi as the game's diabolical overlord, and – is that really him? – the long-dormant Channing Tatum, a very welcome sight, flashing more extreme moves than those in "Magic Mike" as an in-game avatar.

Levy, a veteran director of warm-hearted comedies (the "Night at the Museum" movies, "Cheaper by the Dozen"), has a light touch and he juggles the wildlife of the gaming world – a "Grand Theft Auto"-like metropolis – as adeptly as he did that of the Natural History Museum. He's particularly deft at toggling from inside the game to outside it.

While Guy, gob-smacked by Molotov Girl, grows beyond his coding and begins to compete with the other "sunglasses people" (players) in the game, Millie and her former programming partner (Joe Keery) investigate whether Soonami, the giant gaming company run by Antwan (Waititi), stole their artificial intelligence (AI) design.

But "Free Guy" doesn't take its concept anywhere particularly interesting, settling more for videogame puns and inner-studio references while at the same time making self-references to its own originality. "Free Guy," for sure, belongs to a rare big-budget summer-movie breed given that it's not based on previous intellectual property. And the movie has a lot of fun with that.

Antwan is readying a dumbed-down sequel (a "See-QUAL" as Waititi emphasizes) to "Free City" that he brags is simply trading on the game's strong IP. Yet but the end of "Free Guy," a movie made by Fox as it was being acquired by the Walt Disney Co., "Free Guy" chokes on its own pop-culture references, slipping in "Star Wars" theme music and Captain America's shield.

Maybe I'm being too hard on a mostly fun if forgettable movie. It's become a kind of trademark of Reynolds, also a producer here, to make big studio films that don't take themselves too seriously, that delight in an eager-to-please, fourth-wall-breaking schtick.

"Free Guy" isn't as anarchic as "Deadpool," but it likes winking at the camera just as much.

Yet for a proudly "original" movie, "Free Guy" isn't really so original. It's a charming concoction of cliches cribbed from other movies, from "Tron" to "Truman," without its own coding.