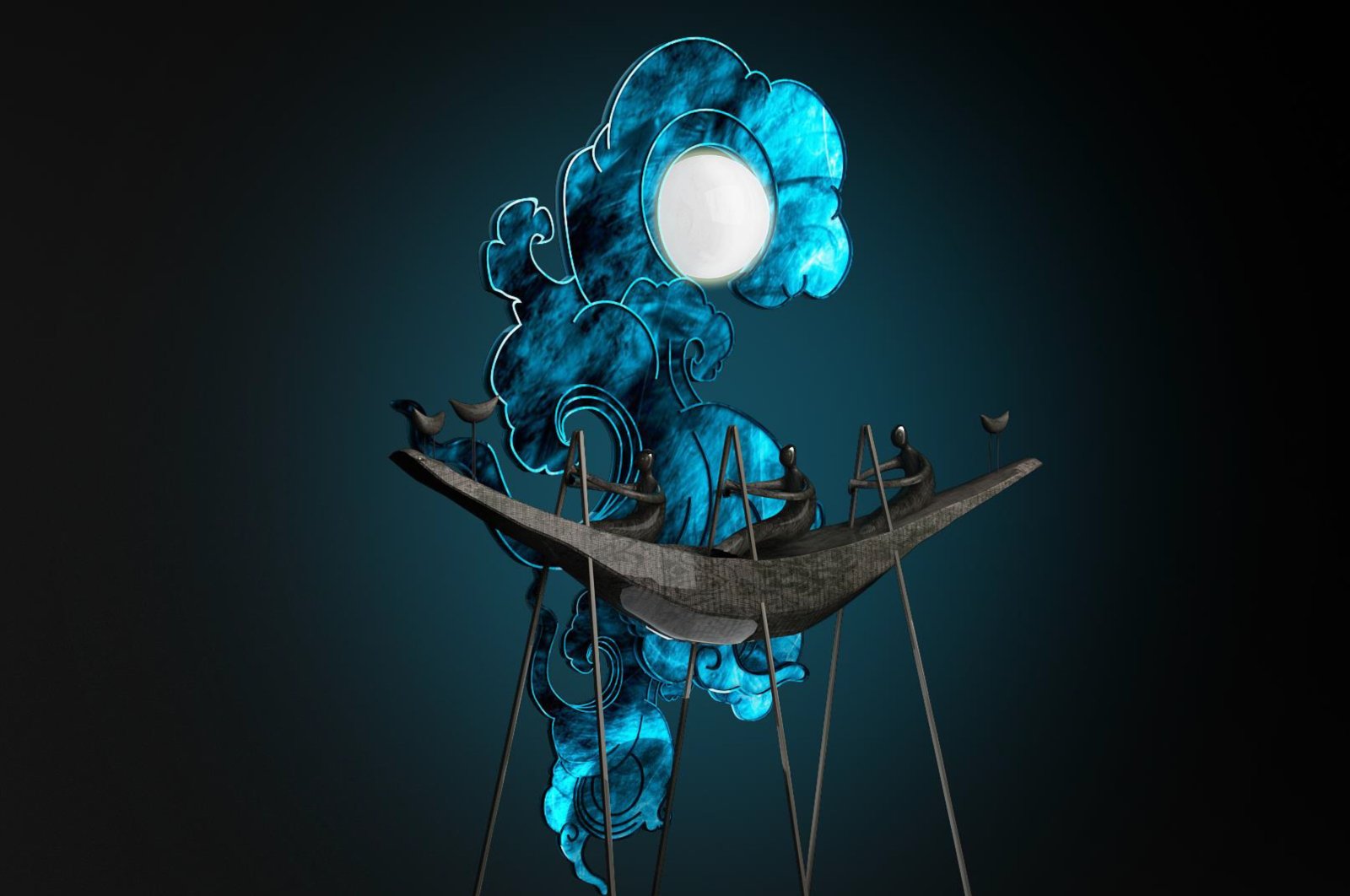 Throughout history, the effort of human beings to express themselves has remained the same although the expressions, aesthetic understanding and concepts change from time to time. Regardless of the period, people have chosen to express themselves and the environment with their artistic creations.

In these creations, there have always been influences and inspiration between many different branches and example disciplines in almost all periods. For example, the clothes were clearly designed with inspiration from architectural structures in ancient Greece. The corrugated areas used in the columns in Greek architecture can be observed in the drape layers and cylindrical form of the “chiton,” the most popular garment of the same period. Therefore, art surrounded life without us even being aware of it since time immemorial.

However, the spell of this interaction was destroyed with the industrial developments as the world was taken over by the craze of mass production. Nevertheless, various movements like the Arts and Crafts in the late 1800s and the Bauhaus in the early 1900s supported the combination of fine arts aesthetics with industrial designs, emphasizing the unqualification of bad mass-produced goods. In the later process, many artists and designers continued to present spellbinding works that they created by bringing together various disciplines and can be a part of our daily lives.

Sinan Yılmaz is among these designers and produces sculptural furniture that he named "furnsculpture." Yılmaz was always interested in past, antique things, places with memories and stories, myths and legends since his high school years. As he was fascinated by the idea of offering stories and legends that have been told for hundreds of years on the stage, he studied performing arts at Istanbul’s Mimar Sinan Fine Arts University (MSGSÜ).

During his university education, Yılmaz had a chance to work at the workshop of renowned Turkish sculptor Saim Bugay. This was where he learned to look at Istanbul, which is a mixed and layered harmony of cultures. Due to the perspective he gained in this workshop, Yılmaz describes himself as “a designer coming out of Turkish culture, who adds a minaret to a church, sincerely embraces Homer’s Cyclops or serves Albanian livers, Armenian style stuffed mussels as appetizers in his table.”

He worked as an art director, manager and designer at many leading events in Turkey at the beginning of his career following the university. According to the designer, he took an active role in many projects across Turkey, such as the stage designs of the Golden Butterfly, Golden Orange and Crystal Apple Awards, as well as abroad, like famed fashion designer Hüseyin Çağlayan's performances and Turkey’s promotion fairgrounds in the U.S., Germany, Russia and France.

But the designer always had the project of sculptural furniture in his mind and worked on its designs constantly. Eventually, he collected all the stories, myths and legends he had saved and settled in the resort town of Bodrum with his family to realize his “sculptural furniture project.”

In order to make the spaces we live in meaningful, we decorate them with objects, paintings, sculptures that are important to us. In fact, the decor is an important part of our lives; it is an element that brings people together with space and evokes a sense of belonging and ownership. With this point of view, Yılmaz dreamed of bringing the forgotten values, characters and myths of the Turkish culture to the lives of the people as a piece of furniture with which they relate every day.

Noting he thinks that the furniture that surrounds us occupies a place in our subconscious just like they do in spaces, the designer said: “I believe a piece of furniture should have an emotional function as well as a physical function. This is why I dreamed of bringing the stories I want to tell into life as a trinket which is also as a sculptural design object and people can touch and connect.”

Yılmaz set out on a journey to create his furnscupture with his knowledge and experience; however, the production of such creative goods in Anatolia was something that required much courage indeed. Beliefs, living conditions and working style have always shaped houses and their designs, with the furniture culture of these lands minimalist. Reiterating that Turkish ancestors were nomadic and led a land-bound life, Yılmaz added: “They worshiped on the ground, worked in the fields, processed the produce on the ground and rested on the same level. For this reason, their furniture was simple, portable and versatile. More aesthetic goods started to enter the Turkish houses in the first years of the republic. Therefore, we cannot talk about a developed furniture culture in our lands. From this point of view, I went on a quest to create a style about these lands but with my own interpretation.”

After moving to Bodrum, Yılmaz created his own brand for his furnsculptures and named it “Kabb Atalier.” According to him, kabb means the middle of the reel or amusement of the heart in the old Turkish. Explaining his preference “kabb” as the name of his brand, the designer said: “After reaching a certain age, some furniture becomes the toys of adult people. In a way, I design toys for older children.”

Yılmaz has prepared a series of 10 works of sculptural furniture designs over a period of two years. While he is not planning mass production for them, the designer will produce five pieces for each design. But even these designs will have some differences between them, which makes every single production of Yılmaz unique. “The customized and site-specific sculptural furniture will be produced with a collective work in this process,” Yılmaz added.

Let’s take a closer look at some of Yılmaz’s furnsculptural and the story behind them. In fact, the subjects of these pieces are places and characters that we are all familiar with and even witnessed. But they bring stories told from a different perspective to us.

*Shoeshine box design: Shining, brass shoeshine boxes at the ferry piers, stations and entrances of the passages are among the indispensable colors of Istanbul streets. The shoeshine box design of Yılmaz bears various motifs symbolizing the story of the laborers behind these boxes.

The whole story begins with a simple little wooden box on a cobblestone. It is a quick, inexpensive attempt to earn a living. As the shoe shiner gains experience in his profession, he begins to embrace his chest. First, he adds little stairs to both sides of the chest, like the epaulets of his experience.

The reason why the bottle forms on the stairs are designed to evoke chess pieces is that they represent seniority. It's like stars on epaulets. Later, he adds shiny brass ornaments to his wooden chest with local motifs reminiscent of his hometown. Or he decorates the trunk of the chest with postcards of Yeşilçam artists he likes. When you look at the box, you realize that all the decorations are on the front because the shoe shiner is still the laborer who shines shoes with blackened hands and painted trousers behind the box just like the first day.

*Fishmarket design: The red and blue benches, which are illuminated by simple 60-Watt incandescent bulbs and where scaly fish move slightly, entice us into fish markets. It is a festive place with the sounds of seagulls mingling with the calls of the sellers and the cats trying to snatch a quick lunch.

These markets, which offer a chirpy image with their colorful benches, are now far from their rustic appearance in their industrial state. With the bird and fish figures in its design, this sculptural furniture of Yılmaz reflects the colorful days of the fish markets.

*Külhanebeyi design: In the Ottoman Empire, külhanbeys, the ones dealing with the furnace in hammams, threw coal into the furnace to ensure it burned continuously. After their work was finished, they washed their faces, shaved and donned essences. And then they would bluster and ramble in Galata neighborhood with the egg-heel shoes that they wore by crushing their backstays, their jackets drooping a bit from their shoulders. The Külhanbeyi design of Yılmaz takes viewers to those old Istanbul days with its upper part resembling the fez and fringe-like ornaments in the middle part mirroring the jacket of the külhanbeys.

*Tulpar design: Usually depicted as a white or black horse, Tulpar's name is mentioned in Turkish, Kyrgyz and Altai mythologies. It has white wings and was created by Kuday (God) to help the valiant. These are the legendary horses ridden by the famous warriors of Manas and are said to run faster than the wind with their wings in the Kyrgyz Epic of Manas, the longest epic in the world. According to Turkish beliefs, no one can see the wings of these horses. Tulpar spreads its wings only in the dark, overcoming great obstacles and distances. It is believed that if someone sees Tulpar's wings, Tulpar will disappear. The design that Yılmaz prepared for Tulpar reflects the glory of this divine house.

*Dalay Han design: Dalay Han, also known as Talay Han, is the god of the ocean in Turkish, Mongolian and Altai mythology. This god lives where the 19 seas meet. While the oceans and seas are in his responsibility, he protects the living things within them. He has the appearance of a well-built man with long white hair and beard. He can take the form of a giant fish (whale) whenever he wants.

He gets his name from the first word of the title of Dalai Lama (Dalai Blama), which is given to the spiritual leaders of Tibetan Buddhism (Lamaism). This word is used to express wisdom and compassion as vast as the ocean. The design that Yılmaz created in memory of this mythological god, shows people on a boat and the tail of a whale representing Dalay Han under them. While the tail implies the power of this god, the other elements of the design indicate his protection and domination over the waters.

The greatest sensitivity of Yılmaz in the process of realizing these designed works is to process them with materials of the region he lives in, to work with local artists and perhaps most importantly, to act with the lowest carbon footprint. Namely, these furnsculptures offer various stories through collective work, local production and the lowest carbon footprint to enthusiasts. The sculptural furniture will be introduced widely through short films and video installations in the summer of 2022.