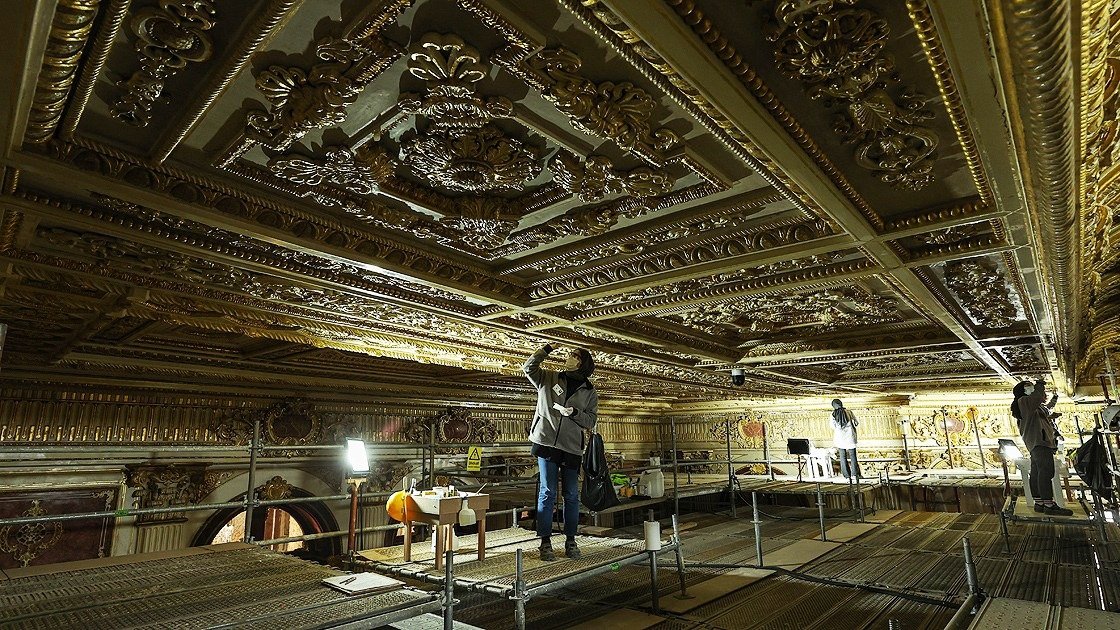 The Süfera Hall at Istanbul’s Dolmabahçe Palace, which hosted foreign officials, ambassadors and held important events during the founder of Turkey Mustafa Kemal Atatürk's rule, is being meticulously restored by a team of experts. The restoration project, supervised by the Presidency of the National Palaces Administration, aims to return Süfera Hall, also known as the Ambassadors’ Hall, to its original character and former glory.

Built in the 19th century, the Dolmabahçe Palace was one of the most glamorous palaces in the world at the time and the administrative center of the late Ottoman Empire. While it was once the residence of sultans during the latter years of the Ottoman Empire, the palace was also used as the presidential residence by Atatürk after the proclamation of the Turkish Republic in 1923.

The Süfera Hall was one of the most important protocol halls in the palace. It was a place where the ambassadors, who came to present trust letters to the sultan, were received and entertained. In order to emphasize the splendor of the Ottoman Empire, the room is decorated with dazzling gold leaves, a large crystal chandelier, pedestal crystal candlesticks and crystal surfaces on European porcelain fireplaces.

The restoration of Süfera Hall began with research and development works. The 164-year-old tughras (the seal or signature of a sultan), belonging to Ottoman Sultan Abdülmecid, on the Treasure and Sultanate Gates of the Dolmabahçe Palace were restored before the Süfera Hall.

During the research, a technique that gives the walls and columns of the hall a porcelain appearance was rediscovered. The restoration team named this process "polished lead white.” This "polished lead white” plaster, which the restoration team reached after 10 layers of paint on the wall, is now known as one of the forgotten original techniques. The linseed oil, wax and resin paint techniques applied to the plaster on the wall were also identified.

Studies also provided clues about the size and durability of the material used in construction. The 20-meter (65.62 feet) monolithic beam laid under the parquets in the 665-square meter (7,158 square feet) hall is obtained from a pine species that grows in the Black Sea Region, while the 13-meter single-piece covering boards used on the beams can only be found in large and historical buildings such as the Dolmabahçe Palace.

In the conservation studies carried out on the walls of the Süfera Hall and the surrounding rooms, it was determined that the Ottoman Empire preferred the color red for this area. The red color, which is known to be used to represent power, became visible under plasters and paints and was preserved in its original form during the restoration.

Gülen Sipahioğlu, who is in charge of the restoration work, said: “We carry out dry and moist cleaning on all surfaces from walls to the ceiling. Then we reinforce the surfaces. We use Klucel G, which is a leather consolidant that comes in powder form to assist in the prevention of the spread of damage caused by red rot and age, for the restoration of the lead white surfaces and benefit from organic sturgeon glue for gold leaf surfaces."

"We are planning to complete the restoration of the Süfera Hall and open it to visitors by the end of 2021. The main goal of our interventions with the restoration project is to ensure that the hall returns to its original quality and identity with its surrounding rooms,” Sipahioğlu said.