To reappear a civilization: Michael Rakowitz at Pi Artworks 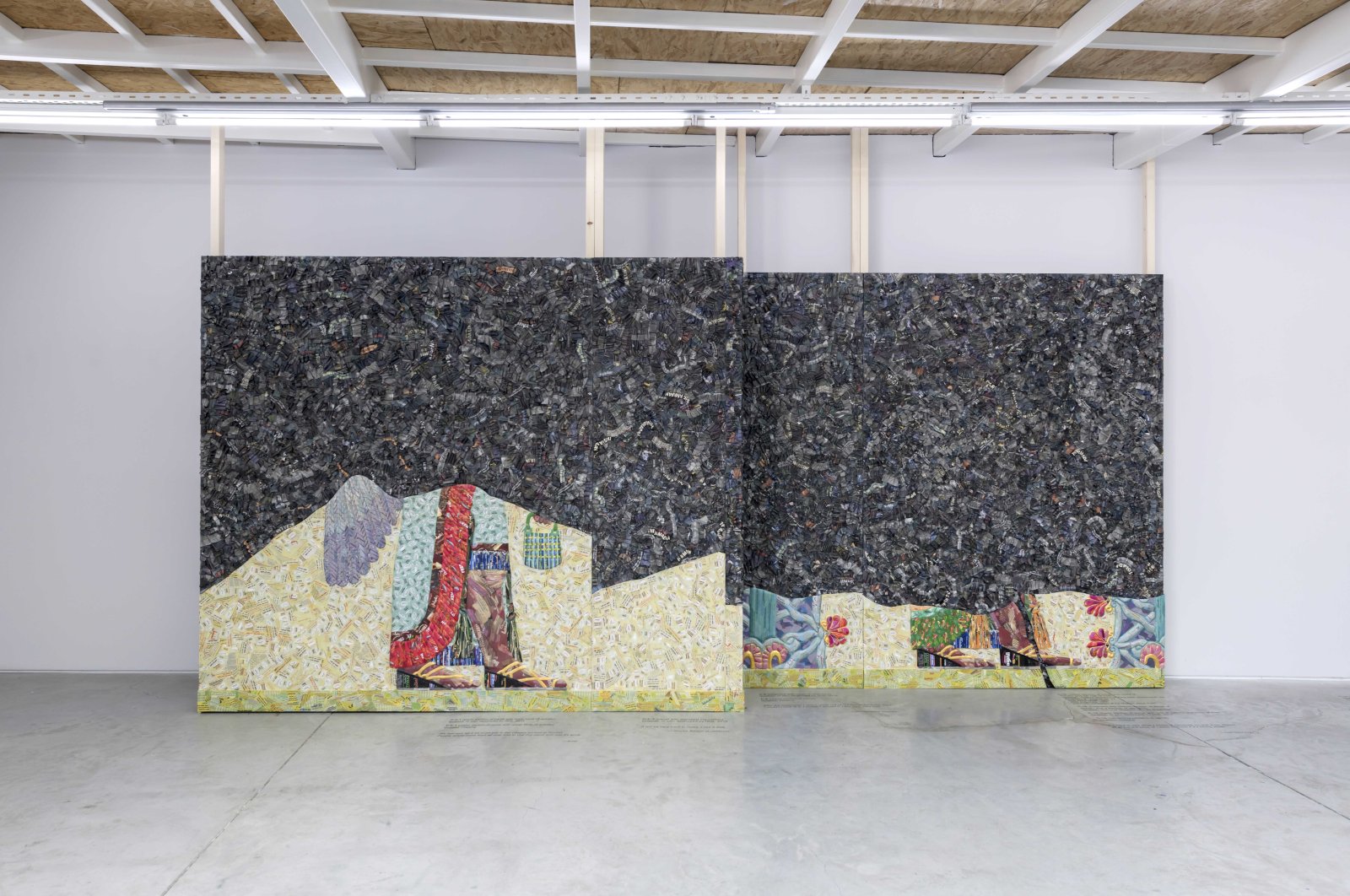 A view from "The invisible enemy should not exist" by Michael Rakowitz. (Courtesy of Pi Artworks)
by Matt Hanson Dec 13, 2021 11:08 am

Michael Rakowitz’s work in Istanbul is of momentous significance, as his solo show, ‘The invisible enemy should not exist,’ offers locals and travelers a window into his epic vision of repatriation

Fourteen years ago, Michael Rakowitz was struck with a lightning bolt of inspiration that shot up from the ground like the tree of life, as from the hand of Zeus. He began a project of biblical proportions, one to rival the mythic ambitions of Noah. The only difference is that Rakowitz has been thoroughly supported in his endeavors, rising to singular renown in the international art world as a man lauded for addressing the wrongs of Daesh and colonialists who, in the last decades, and over the centuries, destroyed much of Iraq’s tangible cultural heritage.

All the while, Rakowitz shoulders the burdens of his seemingly contradictory identities, as an Iraqi American, an Arab Jew. He refers to his family, Baghdadi Jews who emigrated from Iraq and India in the middle of the 20th century, as the first “installation artists” he ever met. Their home on Long Island was filled with the food, wares and music of Iraq. It was the food, particularly their wrappers, that caught his attention for the ongoing series, “The invisible enemy should not exist,” which is the title for his solo show at Pi Artworks.

For Istanbul’s contemporary art scene, showing pieces of Rakowitz’s mammoth works in the white cube gallery in the Karaköy quarter is a fortunate boon of immediate and regional importance. As a participating artist in the Istanbul Biennial of 2015, he made waves from the Bosporus to Anatolia with his installation, “The Flesh is Yours, The Bones Are Ours” (2015), and attracted the likes of Jade Yeşim Turanlı, founder and director of Pi Artworks. She promised him a show and has since delivered.

Essentially an excerpt of the nearly 1,000 artifacts and reliefs that Rakowitz has made “reappear” together with his studio of apprentices, the Pi Artworks show exhibits a single panel from the Assyrian palace reliefs at Kalhu, also known as Nimrud. At his current pace, it would take Rakowitz another 84 years to design his plan to make over 7,000 lost artifacts from the collections of the National Museum of Iraq “reappear.” But, as he says, the idea of pursuing a series that will outlive him is the point. It is part of his ethos of epochal, cultural reconstruction.

Against the far wall at Pi Artworks, is Section 1 of Room C from Nimrud, which, sadly, was demolished by Daesh. It is said that their militants broke the priceless Assyrian reliefs down with sledgehammers and smashed them against the floor because they were simply too big for them to carry out and sell on the black market. Rakowitz’s intervention rebuilt, or reappeared, the structures as they would have looked to a lotcal gazing in wonder at what was left of them in the National Museum prior to the Daesh takeover.

Using Arabic-language newspapers and food packaging gleaned from Arab food shops, Rakowitz labored with fellow craftworkers in his Chicago studio to create a spectacular likening of the toppled reliefs. The wrappers were especially moving for him to work with, as he started the initiative while shopping in the grocery store of Charlie Sahadi in Brooklyn, which still carried the Iraqi date syrup his family had in their kitchen to sweeten their foods. In a turn of multilayered meaning, he learned that although their brands noted that their products came from Lebanon, they were produced in Iraq and intentionally mislabeled to evade sanctions.

By reproducing the vanished Assyrian reliefs with the cleverly itemized Iraqi wrappers, he approximated his uncanny relationship to objects as a contemporary installation sculptor, seeing the food packaging as a metaphor for the Middle Eastern migrant’s fear in America of being exposed as to their true origins in the face of the xenophobic politicization which has demonized Iraqis as an evil enemy to be subjugated and at best tolerated once subdued. Peering at his work, which includes object-based artifacts, the inanimate pieces come alive.

“Panel CB-1” (2021) continues from Section 1 to Sections 9 and 10, where the images of the reliefs are sliced in an erratic line that cuts figures off from as high as the waist, but towards the end of the wood panels reveal only the feet. The Assyrian deities, winged men in the high garb of palace elites are reduced to their legs. It is, as Rakowitz confirms, what would have been left of the reliefs by colonial antiquities dealers whose moral compass was about as sophisticated as Daesh's leadership when it came to their respect for Iraq’s cultural history.

Rakowitz shies away from certain popular usages, such as to call Assyrian art “ancient" in the interest of revitalizing a more urgent reclamation among Iraq’s multicultural communities in the diaspora, of which he has become a vocal and active part. Although he has not yet been to Iraq and remains ambivalent about doing so, his relationship to its past is clear. His artwork is an expression of Iraqi resilience on behalf of a people who have survived countless invasions. He is using fine art to make the Iraqi presence known, and seen, undead, but in full color.

In small print in the shadow of his Assyrian reliefs, which, bursting with vivid spectrums of advertising material, have a decidedly pop art effect. A handbag carried by the burly figure in Section 1 of “Panel CB-1” has an almost effeminate palette. The meticulously intricate craftwork of the piece is plain, reanimating the gold-sandaled “apkallu” demigods, which, despite being headless, retain their sage poise. To add emotionality to the installation, Rakowitz included quotations that contextualize the disappearance of the originals.

The words of an interview subject named Amar grace the cold, bare, concrete flooring of Pi Artworks. He said, “We feel sad, as a lot of people in the villages worked at Nimrud. People would come from all over Iraq to visit this place and now it’s gone.” The text notes that Daesh destroyed the relief in 2015. A year later, when Nimrud was recaptured by the Iraqi Army, 90% of its excavated sites had been razed. The unspeakable loss that Rakowitz is pointing to, however, is not material, but human.

A quote under Sections 9 and 10 of the panels, which colonialists left less intact, Rakowitz placed a quote by an Iraqi named Mohammed Sayeed, who said: “After the explosion, I didn’t come out of my house for three days. I couldn’t look at it, I couldn’t accept it. I felt very, very bad.” The sense that the Pi Artworks exhibition of “The invisible enemy should not exist” gives in Istanbul is that while the world is deprived of a massive chunk of its artistic birthright, those who have lived closest to the desecrated palaces suffered most.