True story behind Gunpowder Plot and its conspirators 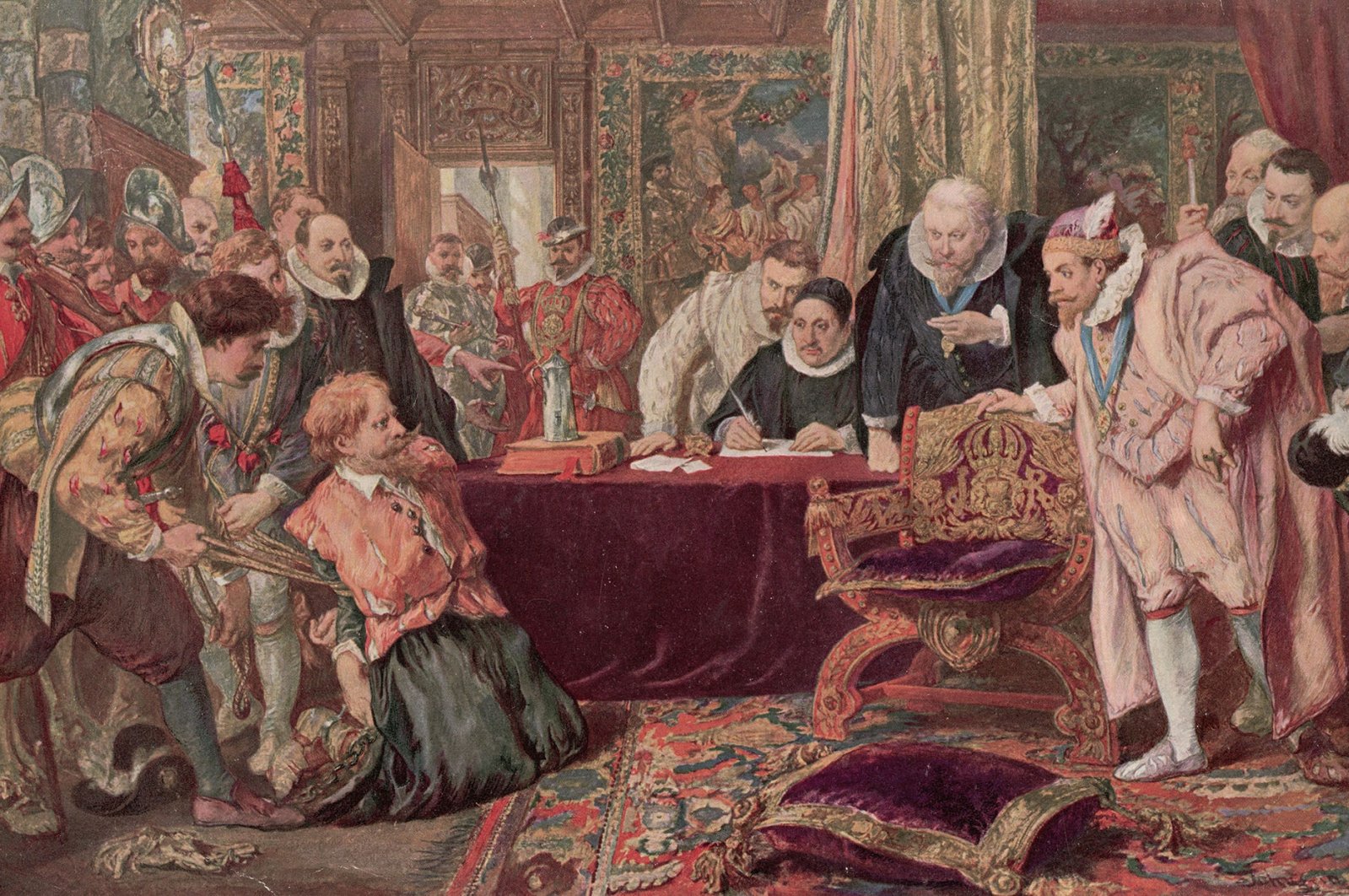 The Gunpowder Plot, the failed attempt to blow up England’s King James I and Parliament, is one of the popular conspiracies in world history. But do we know the real conspirators of this incident evaluated as treason?

“Remember, remember! The fifth of November.” Most of us remember these words from the 2005 movie “V for Vendetta.” Adapted to the screen from Alan Moore's graphic novel of the same name, the film takes place in the Britain of the future. After a pandemic, a fascist government was established in the country. Wearing a Venetian-type Guy Fawkes mask, our hero simply known as V blows up Parliament to awaken the public and overthrow the government. In the movie, V actually completes the failed Gunpowder Plot, which originally took place in 1605. So what actually happened at the time of this plot?

Robert Cecil, chief minister of King James I, showed the king an anonymous letter of advice on Nov. 4. His friend William Parker, the fourth Baron Monteagle, had brought the letter to him. Lord Monteagle claimed that his brother-in-law, Francis Tresham, was the one who sent this letter. The letter said that a group of Catholics, including Tresham, would blow up Parliament on Nov. 5. That day the Protestant King James was also expected to attend the opening of Parliament. Tresham was sparing his brother-in-law, who was going to attend the opening, by informing him of the conspiracy. After reading the letter, King James immediately ordered the base of Parliament be searched.

A search in Parliament's cellars unveiled a room filled with gunpowder, and explosives specialist Guy Fawkes was caught guarding the explosive in this room. After being tortured, Fawkes revealed the names and intentions of his friends. When the king died in the explosion, they planned to move James's daughter to the throne and marry her to a Catholic nobleman.

After these confessions, those who participated in the conspiracy were caught and executed one by one. Among them was Priest Henry Garnet, chief of the English Jesuits. Some were killed in the conflict following the arrest. Tresham, who reported the conspiracy, was poisoned to death in the Tower of London.

After the incident, there was a great hatred for the pope, Jesuits and Catholics in the country. Laws imposing harsh punishments on Catholics and those who do not attend the services of the Anglican Church were introduced. Catholics had already been oppressed since the reign of Queen Elizabeth. But the tolerance shown to the members of the Roman Church has now completely disappeared thanks to this conspiracy.

Catholics claimed that Cecil and Lord Monteagle actually orchestrated this conspiracy. They said they poisoned Tresham so he wouldn't speak. To understand whether this claim is true, the most correct question to ask about the conspiracy is “Cui Bono,” namely “to whom is it a benefit.” To find the answer to this, we need to reach south and a little bit into the past.

In the 16th century, a pro-reform Hermetic-Humanist sect was founded in Italy. The headquarters of this order, known as the Spirituali, was Venice, and its leader was the Venetian nobleman and cardinal Gasparo Contarini. The House of Contarini, of which Gasparo was a member, was one of the 12 families that founded Venice and were called the Twelve Apostles.

Venice, the most powerful financial state of its time, was holding Europe in its pocket thanks to its money and intelligence power. Although they looked like Catholics, they actually had little to do with religion. What matters to them was their benefits and interests. An Italian writer once said about the Venetians: "(They are) eager to drink with the milk the ungodly doctrine of Machiavelli rather than the doctrine of Jesus." They, on the one hand, were trying to establish new sects against the Catholic Church in England and attempting to reform and control the Catholic Church from within on the other.

Cardinal Contarini, who made reforms for this purpose together with Pope Paul III, born Alessandro Farnese, took care of Ignatius Loyola, who was sent from Venice to Rome. He helped found the Catholic order of the Society of Jesus, headed by Loyola. Thus, Venice had a strong arm within the Catholic Church.

There were many English studying at the University of Padua in Venice, from where Cardinal Contarini had also graduated. Young people became humanists here and returned to their hometowns as reformers. They were serving Venetian interests in their country. Among them were Reginald Pole, cousin of King Henry VIII, and Richard Morrison, the propagandist for Henry VIII. There were also native Italian reformers at the court, such as Giovanni Battista Castiglione, who taught Princess Elizabeth and Prince Edward Italian.

Humanist Italophiles at the English court sought to break England off from the Roman Catholic Church. It was a rare opportunity for these humanists when King Henry wanted to leave his wife, Catherine of Aragon, who could not give him a son.

Since Catherine was also Princess of Spain, the Roman Church could not allow this marriage to be dissolved. On the advice of his faithful servant Thomas Cranmer, King Henry sent an Englishman named Richard Croke to Venice to obtain a divorce decree. Venice commissioned Cabalist Friar Francesco Giorgi, a member of the patrician family of Zorzi, for this job. Giorgi received the decree by consulting the Jewish rabbis. Pietro Vanni, King Henry's Latin secretary and later Venetian ambassador, also played a diplomatic role in the divorce proceedings. Henry's separation from his wife despite Rome marked the beginning of England's break from the Catholic Church.

Growing up with Italian reform ideas thanks to his tutors, Henry VIII’s son King Edward VI's court was filled with Italian-speaking Englishmen such as Thomas Hoby, William Thomas and Morrison. But with the coming of Edward's Catholic sister Queen Mary to power, most of them left England and went to Venice. However, reform efforts did not slow down. Pole, who stayed in Italy for 26 years and became the leader of the Spirituali after Contarini, returned to his hometown. He became the Cardinal of England under the auspices of Queen Mary and continued to reform the church along with Italophiles who remained in the country, such as William Cecil.

William Cecil was a member of a pro-Venice group called the Cambridge Connection, which was headed by John Cheke, professor of Greek at Cambridge, and very active in politics since the reign of King Edward VI. He was in close contact with Venice thanks to a spy named Pietro Bizzarri, whom the members of this group knew well.

After the death of Queen Mary, Cecil became the chief advisor to the ascendant Queen Elizabeth. In his time, those who fled to Italy returned, and the English Protestant Church, headed by Queen Elizabeth, was finally founded.

Tensions between Venice and Rome were at their peak around the time James I of Scotland ascended the throne of England. Venice forbade the founding of new churches without the permission of the state in 1604. The ban on the transfer of real estate to religious establishments without the permission of the state followed it the next year. In the months of the Gunpowder Plot, Venice had begun to arrest the clerics affiliated with Rome. Thanks to this plot uncovered by William Cecil's son, Robert Cecil, England became an enemy of Rome and an ally of Venice.

Looking at all these developments, it seems that the claim of Catholics is more likely to be true. So Venice apparently had organized a conspiracy through the Jesuits, Cecil and Lord Monteagle and then exposed it through Cecil. As a matter of fact, the Gunpowder Conspiracy was later adapted to a play by various English writers. “Venice Preserv'd,” written by Thomas Otway, is one of these plays. The Catholic Ben Jonson, who was involved in the conspiracy, in his comedy “Volpone,” shows his boss Cecil as a cunning Venetian named Volpone (the Sly Fox) and satirizes him in his plays.

It was a permanent part of Venetian Machiavellian politics to play both sides in secret and then get what they wanted in their own best interest. They also used this tactic to break England from the Catholic Church and bring it under their rule but the culprit of the conspiracy became the Church of Rome. Perhaps, for this reason, British Prime Minister Benjamin Disraeli, a Jew who immigrated from Venice, wrote in his English political novel “Coningsby”: “‘Because you have had your history written by the Venetian party,’ said Coningsby, ‘and it has been their interest to conceal them.’"