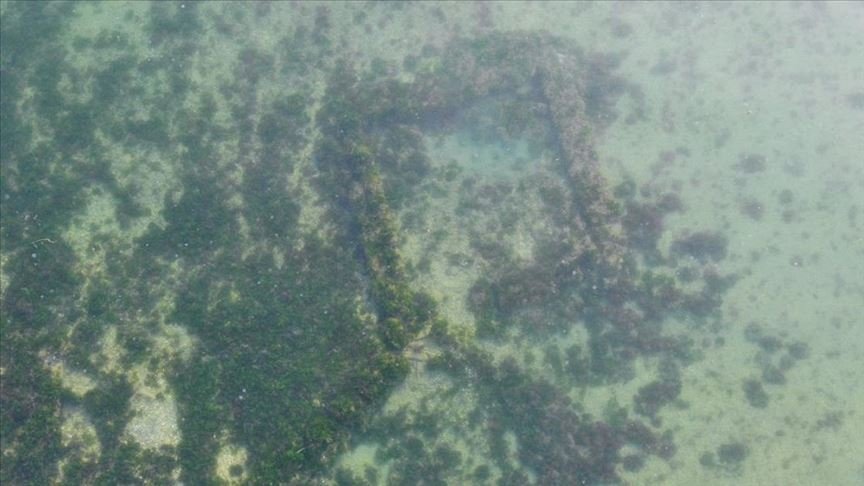 A photo of the submerged Kibatos Castle from above, in the Marmara Sea off Yalova province, northwestern Turkey, Oct. 26, 2019. (AA Photo)
by Anadolu Agency Feb 03, 2021 2:18 pm
RECOMMENDED

The history of the submerged Kibatos Castle, which was discovered in the Sea of Marmara in 2019 at a depth of about 3 meters (10 feet), is being brought to light through comprehensive research by underwater archaeologists.

The castle was found during the Yalova Coasts Ancient Harbor and Underwater Survey, carried out with the permission of the Ministry of Culture and Tourism and with the contributions of Altınova Municipality, Uludağ University and the Turkish Historical Society. The structure is known to have been built during the Byzantine period in the Altınova district of northwestern Turkey’s Yalova province and is estimated to have been submerged due to earthquakes.

The research team headed by Serkan Gündüz, an academic at the Department of Underwater Archaeology of Uludağ University, has been working to reveal the details of the castle’s history.

Recalling that archaeological finds of the castle were identified under the water at two different points on the Altınova coastline during surveys, Gündüz noted: “In addition to the remains of two structures considered to be a pier and lighthouse that famous Ottoman traveler Evliya Çelebi mentioned in his writings, a group of structures belonging to the castle has also been found under the water. The pier and lighthouse, which we know from written sources to have been used from the Byzantine period to the last period of the Ottoman Empire, shed light on the importance of the region in the Ottoman period. Evliya Çelebi states in his ‘Seyahatname’ (‘Books of Travels’) that he debarked a ship and came onto the land from this pier.”

Gündüz further noted that they discovered artifacts dating back to different periods from the fourth century to the 12th century in the submerged castle, continuing: “The Kibatos Castle is a small castle that was built by the order of Byzantine Emperor Alexius on the Bay of Nicomedia, located in today's Gulf of Izmit. Many researchers support the idea that this castle was built for the refuge of Anglo-Saxon soldiers who escaped from the Battle of Hastings between the Crusader armies and the Seljuk armies in the First Crusade in 1069.”

Gündüz said the castle was called “Civetot” in Latin chronicles while it was later named “Kibatos,” according to Byzantine author Anna Komnene. “The castle witnessed important events throughout history. One of the most important of these events is the First Crusade, which is very unknown in Turkish history. In 1096, the Crusader army, which settled around the Civetot Castle, was defeated by the Anatolian Seljuks. After the First Crusade, a martyrdom was built here in memory of those who were martyred, and it was used as a monastery affiliated with the France-based Cluniacs," he said.

Gündüz emphasized that there had been efforts to build walls around this monastery to turn it into a castle in the past. However, it was allocated to the Latin knights after the invasion of Istanbul by the Latins, called The Sack of Constantinople, in 1204. According to Gündüz, before the construction of all of the castle walls was completed, the castle was destroyed in the naval battle between the Latins and Byzantines, and its valuables were moved to Istanbul.

“Although the exact date of the sinking of the castle is not known, it is believed that it was flooded as a result of a severe earthquake on the northern Anatolian Fault Line after the naval battle. The studies to be carried out are crucial for clearer identification of the connection between the remains and the Civetot Castle,” he said.

Gündüz underlined that this castle is of great importance in terms of the cultural heritage of the Cluniacs in Europe. He said that the European Federation of Cluniac Sites (FESC) has been working intensively to include cultural and natural sites belonging to the Cluniacs in UNESCO’s World Heritage List since 2018. “The cultural heritage of the Cluniacs is concentrated in Western Europe, such as the U.K. and France. The only known cultural heritage belonging to this group in the Balkans and Turkey is the Kibatos monastery, and it is important for functioning as a cultural bridge between Europe and Anatolia. After it has been registered as a result of excavation work that the cultural assets identified underwater belong to the Civetot monastery, it will take its place on the cultural route among the Cluniac centers and contribute to regional tourism," he said.

Altınova Mayor Metin Oral also said that studies carried out in the region have reached an important stage. Noting that the province is home to significant cultural heritage, Oral noted: “We have three important castles in our region. One is the Çobankale Castle which we continue to work on. The other is the one located in the ancient city of Helenopolis. We had been searching for the third one and we have found it with Kibatos Castle. As the work continues in the coming period, it will provide us with more information and documents. In the future, this place may be turned into a virtual museum or diving tours to see the castle can be held. Surely, this can happen after a little more information is revealed and further progress is made.”