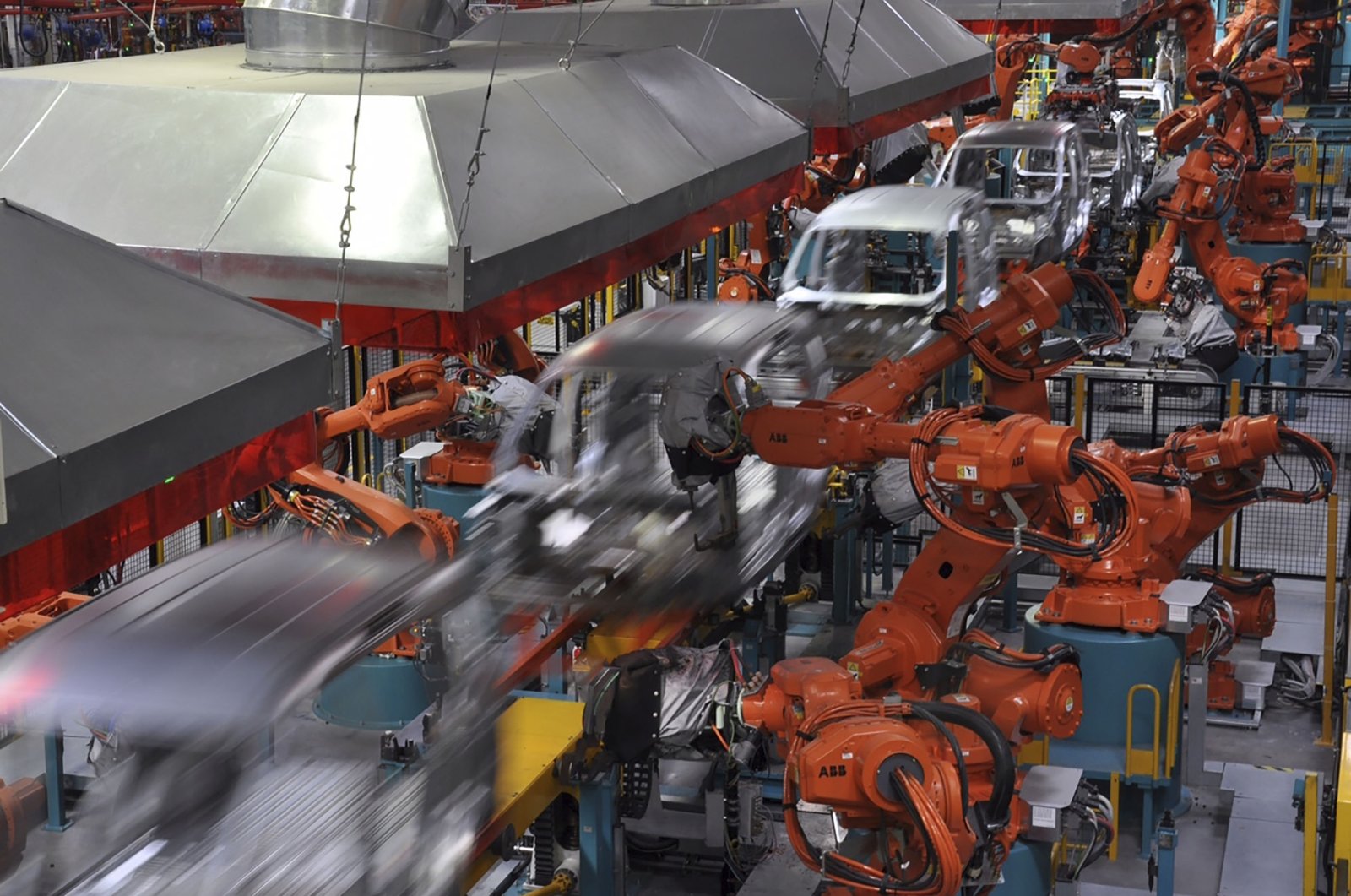 A statement released by the company on the Public Disclosure Platfrom (KAP) on Monday said production at the Gölcük and Yeniköy plants in northwestern Kocaeli province will be suspended from April 3 to April 9.

"After the COVID-19 pandemic, which has affected the whole world since the first quarter of 2020, due to the increasing demands of many industries for electronic components (microchips), there are problems in the supply of in-vehicle electronic components, which have been used more intensely in the automotive sector in recent years. Our main partner, Ford Motor Company, works with its global suppliers to ensure the efficient use of materials belonging to electronic components by giving priority to the solution of the problem and main production lines. As Ford Otosan, necessary plans are made with our suppliers, and the possible effects of supply shortages are minimized," the company said.

It added that the suspension is not expected to affect its production and sales forecasts for 2021, or efforts to re-arrange production lines in line with new investments, including a $2.4 billion move to boost production of commercial vehicles and batteries.

Top automakers like Ford, Honda, General Motors and Volkswagen were caught off guard by the shortage even as automotive demand picked up during the COVID-19 pandemic, forcing many of them to hold back production. The chip scarcity is also a result of increased demand from the consumer electronics industry as people worked from home and played more video games during the health crisis.

The shortages in global markets deteriorated when a Japanese chip-maker, accounting for 30% of the global microcontrollers for cars, was hit by a fire. Renesas Electronics Corp. announced Monday that it now believes damage at its chip-making plant in northeast Japan was more extensive than first thought, a company spokesperson said on Monday.

The company had initially said 11 machines were damaged in a fire earlier this month at the Naka plant, but the Nikkei reported on Monday that the number of inoperable machines was now believed to be around 17, according to Reuters. While the Renesas spokesperson would not confirm a specific number, she added that the chipmaker would share the extent of the damage by Tuesday.

Renesas has said it will take at least a month to resume production at its 300mm wafer line at the fire-hit plant, but replacing damaged machines could take several months. An extended outage could add to a global shortage of chips which is disrupting some production of cars and electronic devices.

Renesas accounts for 30% of the global market for microcontroller units used in cars, and two-thirds of the chips produced at the facility are for the auto industry. Shares of the company inched up 0.5% on Monday, in line with the broader Tokyo market. They, and shares of other big Japanese automakers, had tumbled a week ago after news of the fire.

The fire, caused by a power surge in one of the machines, comes after an earthquake stopped production there for three days last month. In 2011, the plant shut down for three months after the deadly earthquake that devastated Japan's northeast coast.

Earlier on Friday, Stellantis had announced that it will suspend production at five North American auto manufacturing plants due to the global semiconductor shortage. The move affects plants in Belvedere, Illinois and Warren, Michigan in the United States, as well as in Toluca, Mexico and two facilities in Ontario, Canada.

Models manufactured at these plants include the pickup Ram 1500, the Jeep Compass and Cherokee, as well as Chrysler and Dodge autos. The plants will be down beginning next week through early to mid-April, said a Stellantis spokesperson quoted by the Agence France-Presse (AFP).

The announcement by the company, which was formed by the merger of U.S.-Italian automaker Fiat Chrysler and France's PSA, follows halts at North American factories operated by General Motors and Ford. Toyota has also cut production at some North American plants.

Electric vehicle maker Nio Inc., which dominates the EV market in China and one of the global challengers to Tesla Inc., was another company to halt production on Friday. Nio said it would halt production for five working days at its Hefei plant from next week and cut its first-quarter delivery forecast by as much as 1,000 vehicles.

Shares of Nio, which makes the ES8 and ES6 electric sport-utility vehicles, fell more than 7% in U.S. pre-market trading. The company also faces competition from home-grown rivals such as Xpeng Inc.

U.S. automaker Ford Motor had warned the shortage could hit its 2021 profit by up to $2.5 billion, while its larger rival General Motors Co expects the crisis to shave up to $2 billion off its full-year profit. Ford, which was until now assembling its highly profitable F-150 pickup trucks without certain parts, said on Thursday it will idle production of the trucks at a plant in Michigan through Sunday.

GM and Japan's Honda Motor Co. Ltd both announced this week they would continue production suspension at plants in North America for the coming weeks.

Swedish truck maker Volvo AB meanwhile said on Tuesday the chip shortage would have a "substantial" impact on its second-quarter earnings, and announced it would implement stop days across its truck manufacturing sites globally beginning in April.

Separately last week, Nissan said it was temporarily shutting down production at factories in Smyrna, Tennessee; Canton, Mississippi; and in Aguascalientes, Mexico, due to the chip shortage.

Sanctions against Chinese technology companies have also played a role in the global shortage of chips, and Beijing took an important step Monday to increase domestic production. China announced tax breaks Monday to spur the growth of its semiconductor industry following U.S. sanctions that alarmed the ruling Communist Party by cutting off access to American processor chips for tech giant Huawei and some other companies.

Leaders declared accelerating efforts to transform China into a self-reliant "technology power” to be this year’s top economic priority after the tariff war with Washington highlighted its reliance on U.S. components for smartphones and other industries Beijing wants to develop.

Chipmakers can import machinery and raw materials tax-free through 2030, the Finance Ministry and other agencies announced, according to the Associated Press (AP). They did not say how large a subsidy to manufacturers that might represent.

Beijing has spent heavily over the past two decades to build up a Chinese chip industry, but its makers of smartphones and other technology still rely on the U.S., Europe and Taiwan for their most advanced components.

Then-President Donald Trump cut off Huawei Technologies Ltd.’s access to U.S. processor chips and other technology in 2019 in a fight over Beijing’s industrial ambitions. Last year, Trump tightened curbs by prohibiting global suppliers from using U.S. technology to make chips for Huawei. That threatens to cripple its smartphone business, which was the No. 1 global seller in early 2020 but has dropped out of the top five brands.

Political analysts expect little change in the U.S. position under President Joe Biden, who succeeded Trump in January. The Huawei founder, Ren Zhengfei, said in February it is "very unlikely” sanctions will be lifted.

Processor chips and other semiconductors are China’s biggest single import, totaling more than $300 billion a year. Under the latest measure, machinery and raw materials "that cannot be produced or whose performance cannot meet demand” will be exempt from import tax, the government said. That applies to photoresists, masks, polishing pads and liquids, silicon crystals and wafers, materials to build clean rooms and other production equipment, according to the announcement.