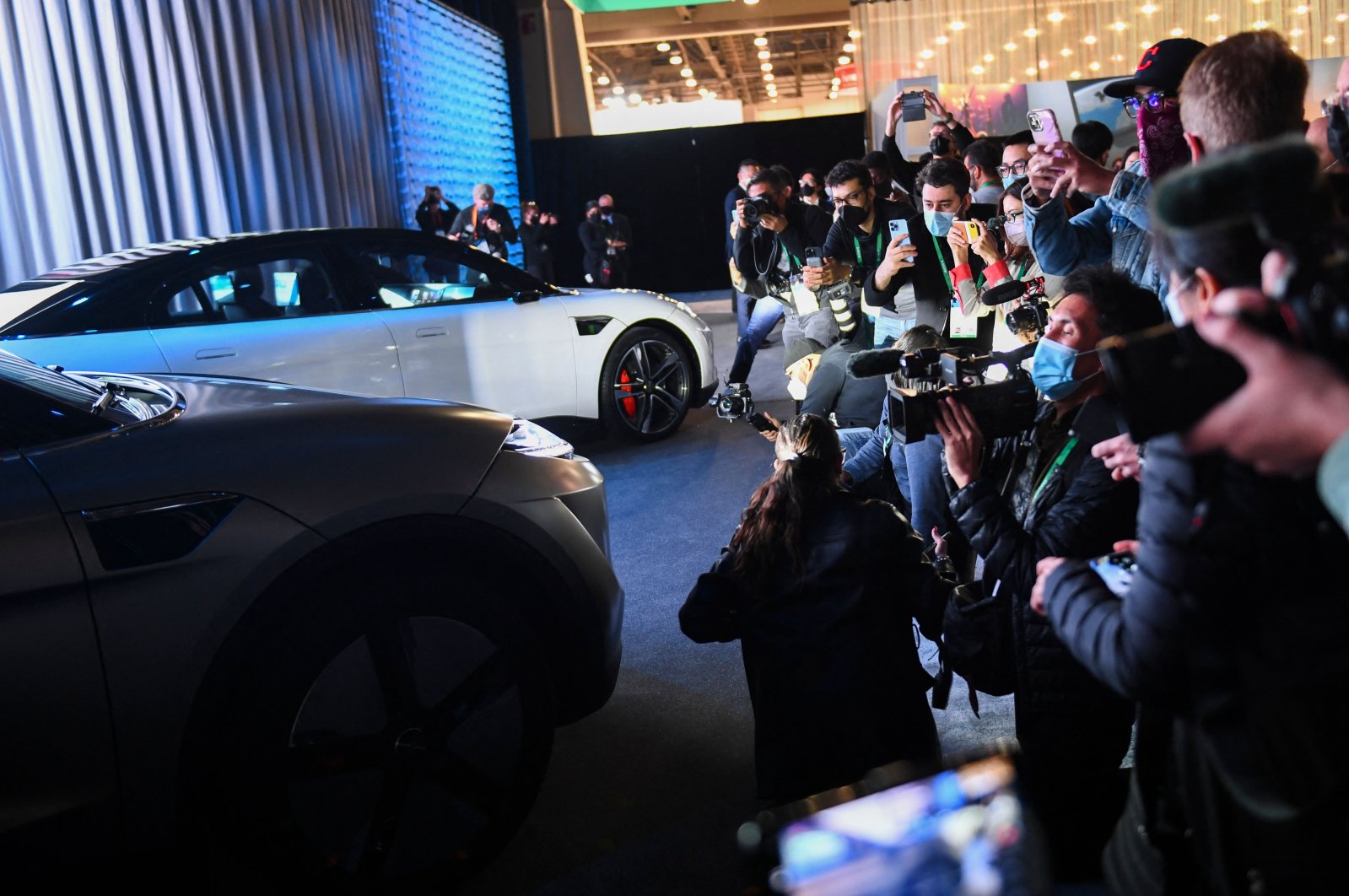 A crowd of attendees wear face masks as they photograph the Sony Vision-S SUV prototype electric vehicle after it is unveiled during the Sony press conference ahead of the Consumer Electronics Show (CES), Las Vegas, U.S., Jan. 4, 2022. (AFP Photo)
by DAILY SABAH WITH AGENCIES Jan 05, 2022 12:02 pm
RECOMMENDED

Japanese technology giant Sony announced Tuesday that it plans to launch a company this spring to examine entering the rapidly growing electric vehicle market after unveiling a new prototype of its Vision-S electric vehicle.

The Japanese firm, best known for its TVs and video game consoles, will create the Sony Mobility subsidiary in spring 2022 as it weighs entering the field.

The new company, Sony Mobility Inc., comes as the Japanese tech giant is "exploring a commercial launch" of electric vehicles, Sony chairperson and president Kenichiro Yoshida told a news conference, speaking ahead of the CES technology trade fair in the United States.

"With our imaging and sensing, cloud, 5G and entertainment technologies combined with our contents mastery, we believe Sony is well-positioned as a creative entertainment company to redefine mobility," he said.

Although its once-dominant position in consumer electronics has been eroded by Asian rivals like South Korea's Samsung Electronics Co., Sony still has an arsenal of sophisticated technology in areas such as sensors critical to autonomous driving.

It also remains one of the world's biggest entertainment companies, home to prominent video game and movie franchises. Audio and entertainment systems are increasingly a focus for next-generation vehicles.

Shares in Sony jumped 4.2% in Tokyo after the electric vehicle plans were announced, easily outpacing a flat Nikkei index.

The Vision-S is packed with internal and external sensors and is used by Sony to test its autonomous driving technologies.

The company is also working on entertainment systems.

The electric vehicle sector is still small, accounting for only about 3% of current sales in the United States but it is attracting a lot of interest and investment.

Japan's Toyota Motor Corp. in December committed $70 billion to electrify its automobiles by 2030.

General Motors has planned to invest more than $35 billion in electric and autonomous vehicles by 2025.

Authorities in the United States plan to spend billions of dollars to strengthen the network of charging stations or encourage individuals to abandon their fossil fuel-powered vehicles.

Wall Street is betting heavily on electric cars and the global auto industry has been upended by Tesla Inc., now the world's most valuable automaker. Many investors also expect Apple Inc. to launch its own vehicle within the next few years.