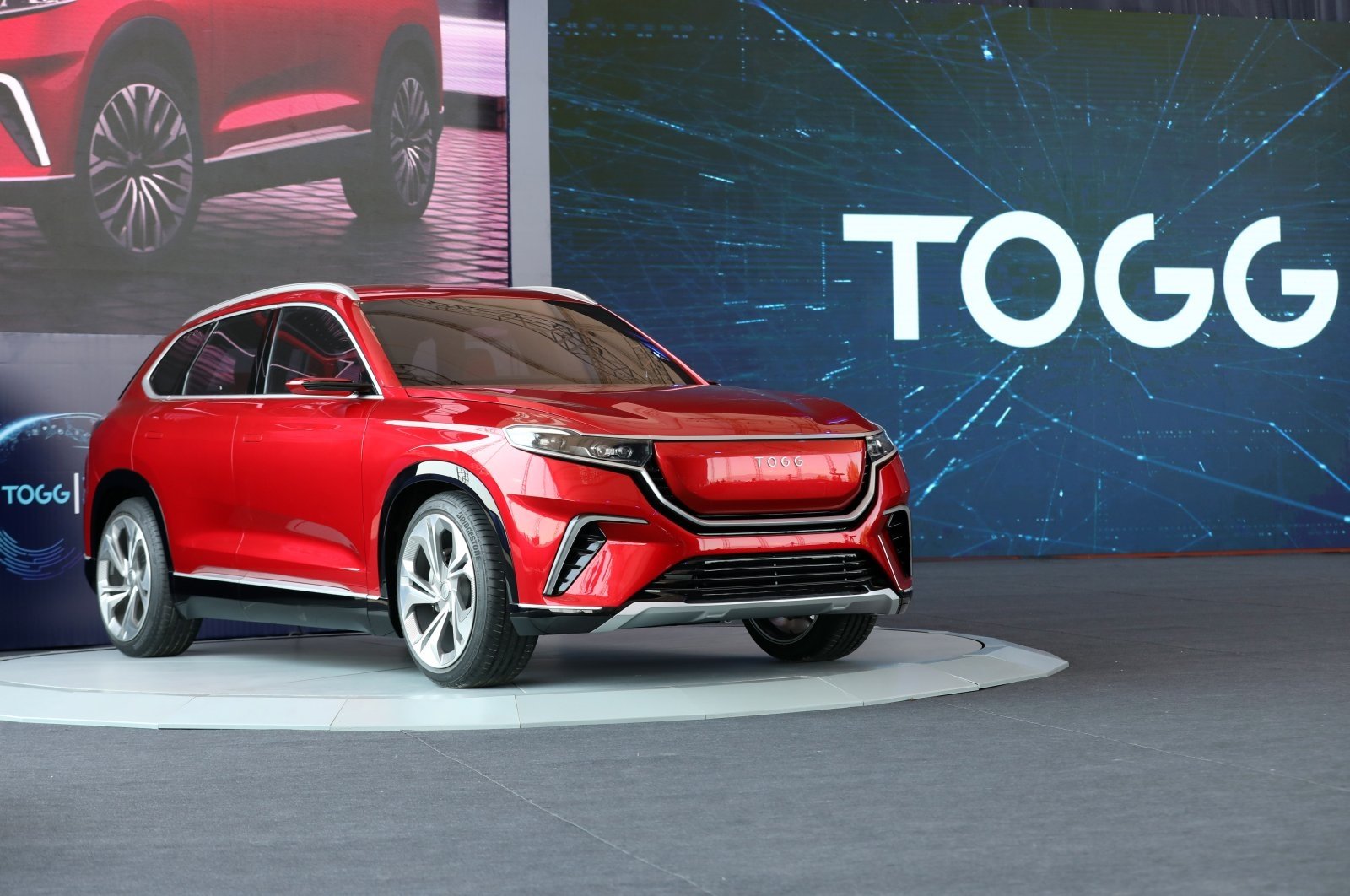 A prototype of Turkey's first electric car is on display at the groundbreaking ceremony for its factory in the Gemlik district of northwestern Bursa province, Turkey, July 18, 2020. (AA Photo)
by DAILY SABAH Sep 09, 2021 2:55 pm
RECOMMENDED

Turkey’s first domestically developed fully electric car has increased awareness in terms of switching to more environmentally friendly electric vehicles and pushed countrywide demand, according to an electric vehicle foundation in the country.

Berkan Bayram, head of the Turkey Electric and Hybrid Vehicles Association (TEHAD), told Anadolu Agency (AA) that the interest in cars powered by alternative sources has been on the rise in Turkey, especially after the country introduced Turkey’s Automobile Joint Venture Group (TOGG), a consortium developing Turkey’s first homegrown car which continues its activities at full speed.

The unveiling ceremony of the vehicle and the groundbreaking of its factory have ignited widespread interest among citizens toward electric vehicles, Bayram said.

He spoke about the electric and hybrid driving event to be held by TEHAD for the second time between Sept. 11-12. It will be open to the public at AutoDrom in Istanbul’s Tuzla, free of charge.

Bayram informed that there were only five brands during the first iteration of this event held in 2019; however, it has now reached 12.

Electric vehicle brands that do not have a Turkish distributor but enter the country’s market, such as Tesla, will also be attending the event.

Emphasizing that they are organizing an event focused on raising awareness of electric and hybrid cars, Bayram said their motto was “Hearing is not enough. You have to try.”

“Because I've been explaining these vehicles for at least 10 years, but it doesn't make much sense for the other side if you don't experience them and don't use them,” he said.

Noting that they expect about 3,000 visitors to attend this year's event, Bayram said that the participants would be able to try and test all the vehicles themselves.

Bayram said that Turkey was first introduced with electric vehicles in 2011, and although the interest is on a rising trend, sales are still below that of the sales recorded across Europe.

Expressing that brands are in competition with each other on electric mobility, Bayram said that when Turkey put its local electric car on the market, it will also be part of this competition.

Seen as the country’s “second automobile revolution” and revived by President Recep Tayyip Erdoğan, TOGG was officially established on June 25, 2018.

Erdoğan, on Dec. 27, 2019, unveiled prototypes for a sport utility vehicle (SUV) and a sedan, both fully electric and C-segment models.

TOGG, a consortium of five major companies, will produce five different models – an SUV, sedan, C-hatchback, B-SUV and B-MPV – through 2030.

Meanwhile, Industry and Technology Minister Mustafa Varank reiterated Thursday that the SUV model will come out of the mass production line at the end of 2022.

Bayram further explained that the necessary infrastructure for the electric vehicle transformation has also been developed in Turkey in recent years.

There were only 15 charging units in four provinces in 2011, he said, while now each city has charging stations with the number of charging unit sockets reaching 4,500 sockets.

Bayram added that although it is still below the desired levels, they expect electric vehicle sales in Turkey to total around 2,500 through the end of this year.