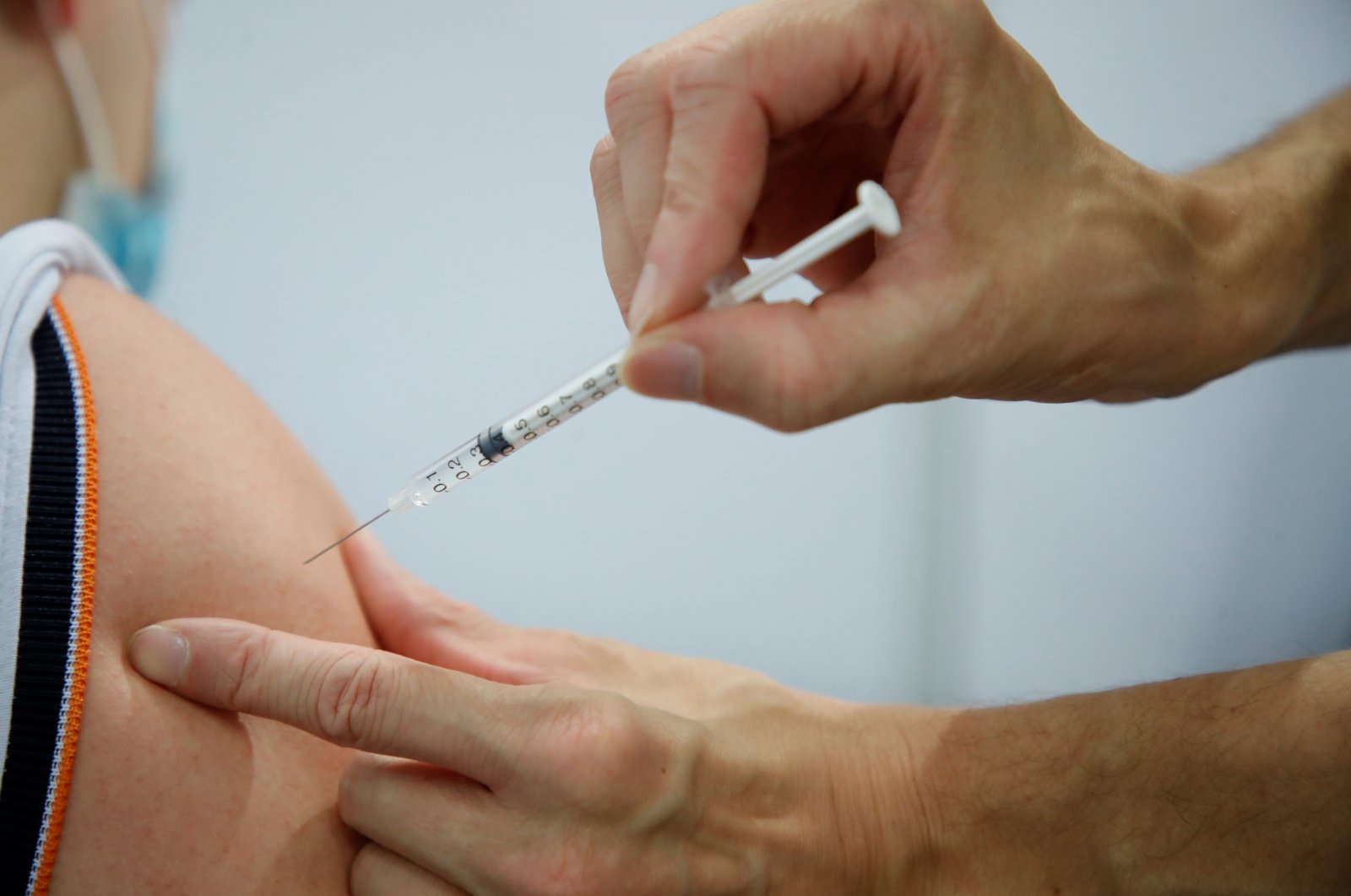 A medical worker administers a dose of the Pfizer-BioNTech "Comirnaty" vaccine at the indoor Velodrome National of Saint-Quentin-en-Yvelines in Montigny-le-Bretonneux, southwest of Paris, France, Aug. 13, 2021. (Reuters Photo)
by REUTERS Aug 13, 2021 6:34 pm
RECOMMENDED

The COVID-19 vaccine market that generates $6 billion in annual sales for flu vaccines for years to come, analysts and health care investors say. Of course, drugmakers Pfizer Inc, BioNTech and Moderna Inc are expected to make the lion's share of this profit with their repeating booster shots.

For several months, the companies have said they expect that fully inoculated people will need an extra dose of their vaccines to maintain protection over time and to fend off new coronavirus variants.

Now a growing list of governments, including Chile, Germany and Israel, have decided to offer booster doses to older citizens or people with weak immune systems in the face of the fast-spreading delta variant.

Late on Thursday, the United States Food and Drug Administration authorized a booster dose of vaccines from Pfizer Inc and Moderna Inc for people with compromised immune systems.

Pfizer, along with its German partner BioNTech, and Moderna have together locked up over $60 billion in sales of the shots just in 2021 and 2022. The agreements include the supply of the initial two doses of their vaccines as well as billions of dollars in potential boosters for wealthy nations.

Going forward, analysts have forecast revenue of over $6.6 billion for the Pfizer/BioNTech shot and $7.6 billion for Moderna in 2023, mostly from booster sales. They eventually see the annual market settling at around $5 billion or higher, with additional drugmakers competing for those sales.

The vaccine makers say that evidence of waning antibody levels in vaccinated people after six months, as well as an increasing rate of breakthrough infections in countries hit by the delta variant, support the need for booster shots.

Some early data suggests that the Moderna vaccine, which delivers a higher dose at the outset, may be more durable than Pfizer’s shot, but more research is needed to determine whether that is influenced by the age or underlying health of the people vaccinated.

As a result, it is far from clear how many people will need boosters, and how often. The profit potential of booster shots may be limited by the number of competitors who enter the market. In addition, some scientists question whether there is enough evidence that boosters are needed, particularly for younger, healthy people. The World Health Organization has asked governments to hold off on booster shots until more people worldwide receive their initial doses.

"We don't know what the market forces will be," Moderna President Stephen Hoge said in an interview last week. "At some point, this will become a more traditional market – we'll look at what are the populations at risk, what value are we creating, and what is the number of products that serve that value. That will ultimately impact price."

Pfizer declined to comment for the story. During the company’s second-quarter earnings call, executives said they believe a third dose will be necessary 6 to 8 months after vaccination, and regularly afterward.

A model in flu shots

If regular COVID-19 boosters are needed among the general population, the market would most resemble the flu shot business, which distributes more than 600 million doses per year. Four competitors split the U.S. flu market, which is the most lucrative and accounts for around half the global revenue, according to Dave Ross, an executive at CSL's flu vaccine unit Seqirus.

Flu vaccination rates in developed countries have settled at around 50% of the population, and COVID-19 boosters would likely follow a similar pattern if approved widely, said Atlantic Equities analyst Steve Chesney.

Flu shots cost around $18 to $25 a dose, according to U.S. government data and competition has kept price increases in check, with producers raising prices 4 or 5 percent in 2021.

Pfizer and Moderna may have greater pricing power for their boosters, at least at the outset, until competitors arrive. Pfizer initially charged $19.50 per dose for its vaccine in the U.S. and 19.50 euros ($23) for the European Union, but has already raised those prices 24% and 25%, respectively, in subsequent supply deals.

AstraZeneca Plc and Johnson & Johnson are both gathering additional data on boosters of their vaccines. Novavax, Curevac, and Sanofi could also potentially be used as boosters, though their vaccines have yet to receive any regulatory authorization.

"A lot of these firms aren't even in the market yet. I think within a year's time, all these companies will have booster strategies," said Morningstar analyst Damien Conover, who covers Pfizer.

There's still a lot of uncertainty around how boosters would be rolled out in the U.S. Still, it is possible or even likely that people will be boosted with different vaccines than they were originally vaccinated with. The National Institute of Allergy and Infectious Diseases is already testing mixed boosting, and other countries that have used so-called mix and match vaccination have not had problems with that strategy.

One factor that could curb prices is if the U.S. government continues paying for most or all of the shots administered in the country, rather than leave it in the hands of private health insurers. In that scenario, the government would still be negotiating prices directly with vaccine makers, and could use its buying power to stave off price increases.

"It's going to be paid for until the virus disappears or mutates to be less virulent," Salehizadeh said.