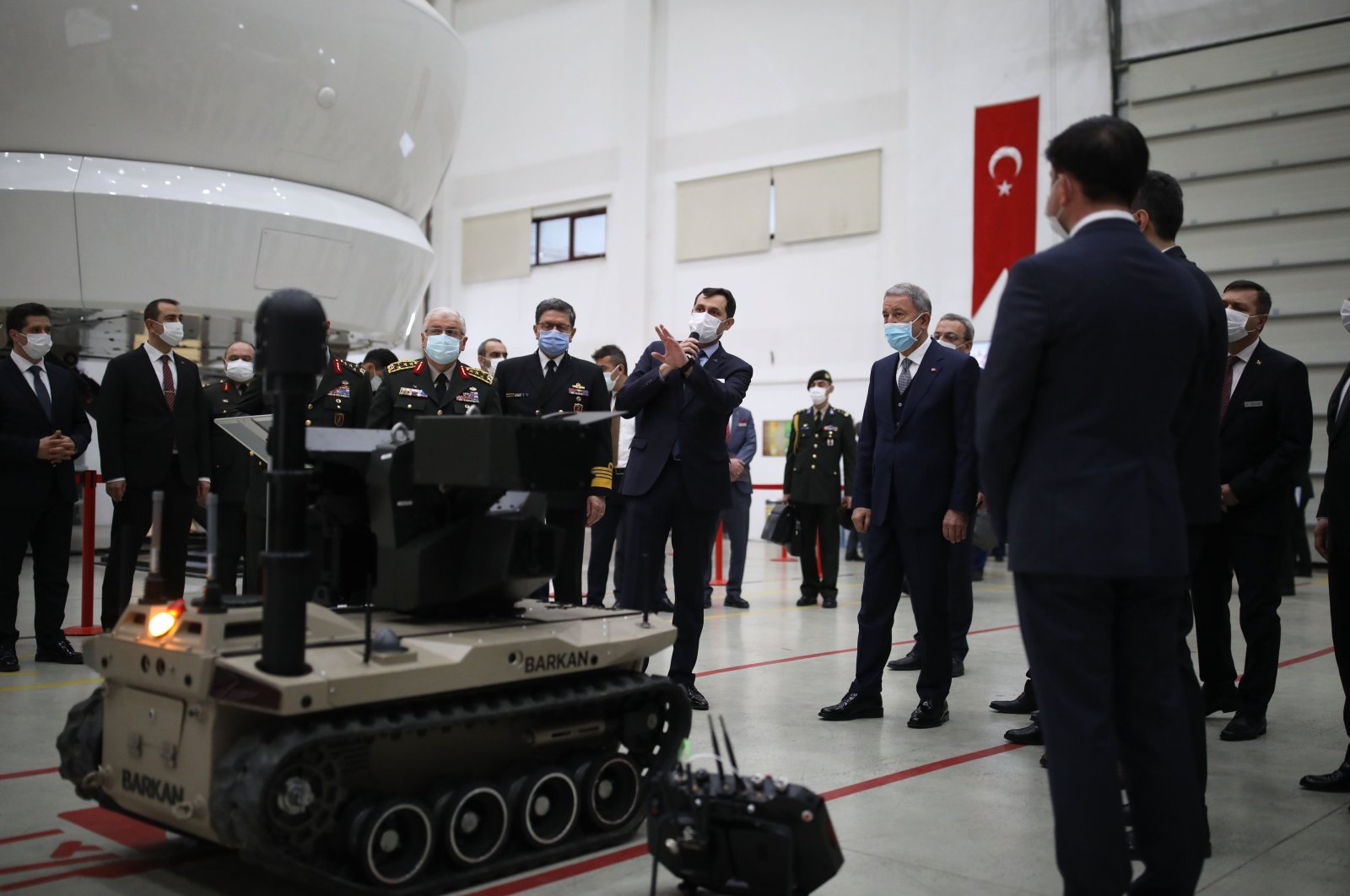 In an exclusive interview with Daily Sabah, Nacar underlined that HAVELSAN eyes to develop digital troops, which were first announced during a ceremony held to unveil the company's new logo in December, signifying a period of change.

“Change has become inevitable for HAVELSAN,” the General Manager underlined, “Our upcoming product family will be digital troops and robotic armies. These include robotic, autonomous, unmanned systems which will operate in a joint operation concept with swarm intelligence.”

He indicated that these systems will be able to communicate with each other, plan missions and start their duty from one point and continue in another location.

Saying that these digital troops include, soldiers, commanders, armored vehicles, aircraft, ammunition and drones, Nacar highlighted that humans will be free from the burden of individually controlling each robot and weapon system in the battle field.

“In unmanned systems, you control robotic vehicles with a controller – here, intelligence is still in the human, the pilot operates. However, in the systems that we suggest, there is already an autopilot - artificial intelligence augmented systems will give the low-level decisions, find its direction, proportion its fuel and convey to its troop if it discovers significant findings,” he elaborated.

“Humans will now be responsible to plan the troops duty, performance in the battlefield can be monitored or the plan can be updated by the commanders, but not necessarily,” Nacar pointed out.

Military training simulations, in which soldiers prepare themselves psychologically for conflicts and learn how to act faster and in a more productive manner, constitute the first pillar of these digital troops. Another vital part of digital troops are wearable technologies. Such technologies may include military exoskeletons allowing the soldier to carry heavy weights, increasing mobility and reducing fatigue or enhanced communication systems, sensors providing augmented hearing capabilities.

Nacar also touched upon another issue on which HAVELSAN gives special focus: digital twins, virtual representations of a physical object or system, which aim to “enhance practicality and with which we render classical systems more sustainable.”

“We create a software representation of a robotic system that is on the field, thereby it can be analyzed while it sends the data on the field directly to us. This is an issue that can be applied on various fields, especially for unmanned and manned vehicles, aircrafts, helicopters or tanks, it can be beneficial in determining a problem remotely."

HAVELSAN envisions to make the impossible possible, he underlined, saying that the company eyes new fields of discovery and will respond to new necessities with new solutions.

Being one of the largest and leading technology companies of Turkey, HAVELSAN is mainly active in the fields of defense, simulation, information and communication as well as homeland security and cyber security.

Nacar reminded that a great number of new technologies take its roots from military researches. “It is possible to use technologies that flourished here, also in civilian areas later.”

“ALPAN, which we have announced last year, was our first prototype vehicle. Our research and development team has thereupon developed a second type of vehicle – BARKAN,” Nacar stated, adding that some subsystems were ameliorated compared to ALPAN, while a weapon tower was installed and new equipment can be integrated into the unmanned ground vehicle (UGV).

Havelsan last year had completed the development of its UGV, ALPAN, and has turned its attention to developing herd intelligence for unmanned land, air and underwater vehicles to allow them to operate in a coordinated way.

The unmanned vehicle was developed as a robust unit, with its compatibility with the physical environment as well as its engine control system, battery monitoring system, environmental sensors such as LIDAR and RADAR, data fusion unit, artificial intelligence module, health condition monitoring system and camera and imaging systems.

Underlining that there is significant demand for HAVELSAN's UGVs and that they can be mass-produced in accordance with these demands, Nacar stated that the defense firm continues to follow the need for new technologies on the field.

“We are at a good point, we receive positive feedback, and we strive for better, developing our software,” he said.

Nacar also mentioned that HAVELSAN has established a ground vehicle test center last year, where it is possible to test the vehicles on all kinds of terrain including mud, pebble, soil, bumps and holes as well as in rainy weather conditions. Thereby, the endurance of the vehicle, its maneuvers and capabilities can be tested, the General Manager stressed, saying that the center is also open for others to use.

The General Manager highlighted that HAVELSAN eyes global markets, one focus of which is the Asia-Pacific region.

“Countries including Bangladesh, Indonesia and Malaysia are within our interests. We are in talks with Asian countries for products that will meet their necessities including the Submarine Information Distribution System (DBDS), auto control systems, cybersecurity and coastal surveillance radar system," he said.

The Air Force Command and Control System (HvBS) is another topic being discussed with other countries.

This highly sophisticated system can be used in NATO, Nacar pointed out.

The HvBS, one of the most prominent integrated command and control systems in the world, features a decision-maker with selected and summarized supporting data over the functional sub-systems. Its intended purpose is to automate a significant portion of functions of the air forces and serves all levels of the air forces organizations from operations to execution.

“We want to enhance our relations with NATO. For the past two years, Havelsan has been substantially interested in NATO projects. We know that we have products and solutions that are competitive at the level of NATO. Now, we are part of the game,” Nacar said.

He underlined that HAVELSAN'S HvBS system can respond to a significant need in NATO.

Nacar also stated that the company is willing to collaborate with the alliance in different fields apart from the HvBS system, “we have already presented NATO an offer on cybersecurity.”

“In the end, our country’s defense technology is a technology developing around NATO, we work on NATO compatible technologies,” he continued.

Saying that NATO is an essential market for Havelsan, Nacar reiterated that the company is experienced in NATO compatibility. “Training toward compatibility has been received in the past. We have taken part in NATO’s military exercises. Our products were approved in NATO exercises. We have been part of NATO’s working groups and have always maintained good relations with the alliance.”

Turkey's TF-X National Combat Aircraft (MMU), is another area where HAVELSAN plays a significant role. The MMU is a joint project of the Turkish Aerospace Industries (TAI) and the Presidency of Defense Industries (SSB). It is a fifth-generation jet. The domestically built aircraft is being developed to replace the Turkish Air Force Command's F-16 fighters, ahead of the gradual phasing out of the latter throughout the 2030s.

“We will support our national project in the relevant fields. It would be unthinkable that HAVELSAN is not part of such a project,” Nacar said, stressing that this may be Turkey’s greatest technology project. He added that HAVELSAN’s engineer teams have started their works while the project is “long-termed, multi-component and bears various fields of technologies.”

Some of HAVELSAN’s contributions to the system will be project-level software development and platform cybersecurity, platform and engine digital twin technology, training and simulation systems, operation analysis and logistic information system.

“We will carry our know-how to this project.”