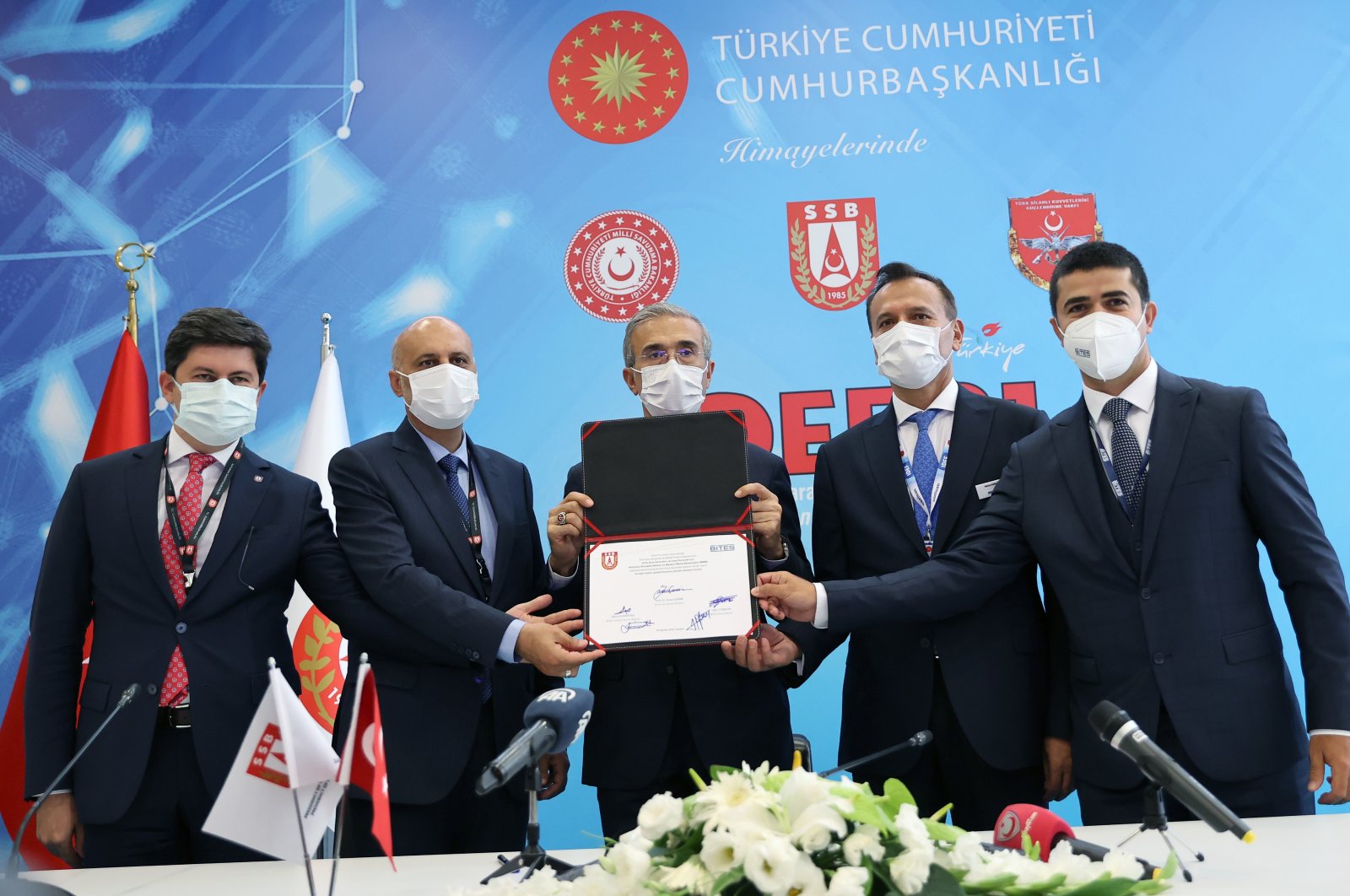 Several protocols, including those on smart communication, augmented reality, cruise missiles, missile engines or coastal safety, were signed at the 15th International Defense Industry Fair (IDEF 2021) on Wednesday as the major global fair continues on its second day with cooperation agreements that will strengthen the local defense industry.

The four-day event is being organized under the auspices of the Presidency of the Republic of Turkey in coordination with the Turkish National Defense Ministry, the Presidency of Defense Industries (SSB) and the Armed Forces Foundation (TSKGV) and is being held at the TÜYAP Fair and Congress Center in Istanbul’s Beylikdüzü on the European side.

One of the agreements, a protocol on land-attack missiles (LAM) was signed between the SSB and Roketsan.

SSB head Ismail Demir attended the ceremony along with representatives from the Turkish Armed Forces (TSK) and Roketsan.

Emphasizing that they passed a very difficult period with Atmaca high-precision, long-range, surface-to-surface, precision strike anti-ship missile in cruise missiles development, Demir said one of the next steps to be taken is to produce a land-based cruise missile that could be launched from land to land.

“We hope to start as soon as possible. We will continue to strengthen the TSK with domestic products,” he said.

Meanwhile, the engines of the cruise missiles developed within the Turkish defense industry will also be provided by local companies. Within the scope of this agreement, the “Turbojet Engine Supply and Integration Project Contract” was signed between Roketsan and Kale R&D at the IDEF. With the contract, turbojet engines developed by Kale R&D with domestic resources will be used in the missiles produced by Roketsan within the scope of the SOM and Atmaca projects initiated by the SSB.

Speaking at the ceremony, Demir said the engines used in the Atmaca missile when it passed the test were procured from abroad. However, as a result of the recent agreement, Kale Group will now produce the engines for the missiles.

One of the protocols signed was within the scope of the “Smart Campus Communication Project” inked between ULAK Communication Inc. and the Ankara Aerospace-Specialized Organized Industrial Zone (OIZ). Demir has attended the signing ceremony along with ULAK CEO Celal Sami Tüfekçi and OIZ manager Gültekin Asiltürk.

In his speech at the ceremony, Demir said they are “all aware of the increasing importance of communication today.”

“It is essential that our communication systems and infrastructure are to be developed as an end-to-end communication network with controllable, manageable, flexible, domestic and national technologies in a way that will meet the needs of the day,” he said, noting based on this perspective, they “have started the work on product conversion and development within the body of ULAK Inc., which has been working for many years under the SSB.

Demir said they are determined to create domestic and national structures that are capable, technologically competent and can compete with the world.

“With the protocols we signed today, a concept called 'Smart Campus Communication' is on the agenda. We think that other institutions and organizations with a campus structure can make this application as soon as possible,” he said.

Another signing ceremony at the IDEF was held between leading software and hardware company Havelsan and the Coast Guard Command within the scope of the “Sahil-Net Project.”

Demir, on the subject, said the use of domestic products is crucial for national security, especially to provide secure network structures in strategically important places.

With the protocol signed Wednesday, a coastal net institutional network has been established between the coast guard headquarters and the affiliated regional and group commands, according to what Demir shared.

“With this network, both an in-house communication infrastructure will be established and the connection with external institutions will be ensured securely,” he informed.

Demir emphasized that the SSB has attached utmost importance to the use of domestic devices, systems and software within the framework of maximum nationalization and industrialization, which is the basic approach of Turkey.

“In this context, I hope that our Sahil-Net Project will be beneficial for the Coast Guard Command and our country,” he said, thanking all stakeholders.

With the Sahil-Net Project, the Coast Guard Command will introduce the floating platforms to a network-supported capability infrastructure. With the project, the elements affiliated with the Coast Guard Command will be able to connect and with the headquarters on land via IP-based wireless networks and gain the ability to communicate securely over different communication channels.

A protocol signed regarding augmented reality projects was among those inked on the second day of the fair.

In addition to Demir, Havelsan’s Nacar, Havelsan chairperson of the board, Celal Sami Tüfekçi and officials of related stakeholders attended the signing ceremony for the protocol between the SSB and Havelsan.

"We always say that our defense industry should take the initiative in developing the leading products in every branch of technology and every field,” Demir said.

“Augmented reality has become a necessity beyond being a technology that provides an advantage on the field in today's combat environment. These are products that will contribute significantly to both cost reduction and training and practices in the most realistic way,” he added.

In this project, Demir continued by saying, in the first protocol signed with Havelsan, “We aim to increase the corporate awareness and mission effectiveness of the personnel who carry out maintenance and repair activities within the scope of mine and improvised explosive device (IED) detection/destruction and combat support service with augmented reality technology.”

The Land Forces Command Augmented Reality Project contract signing ceremony was also among those held on the second day of the defense event. The contract was inked between SSB and BITES, which offers high-tech solutions for the defense industry.