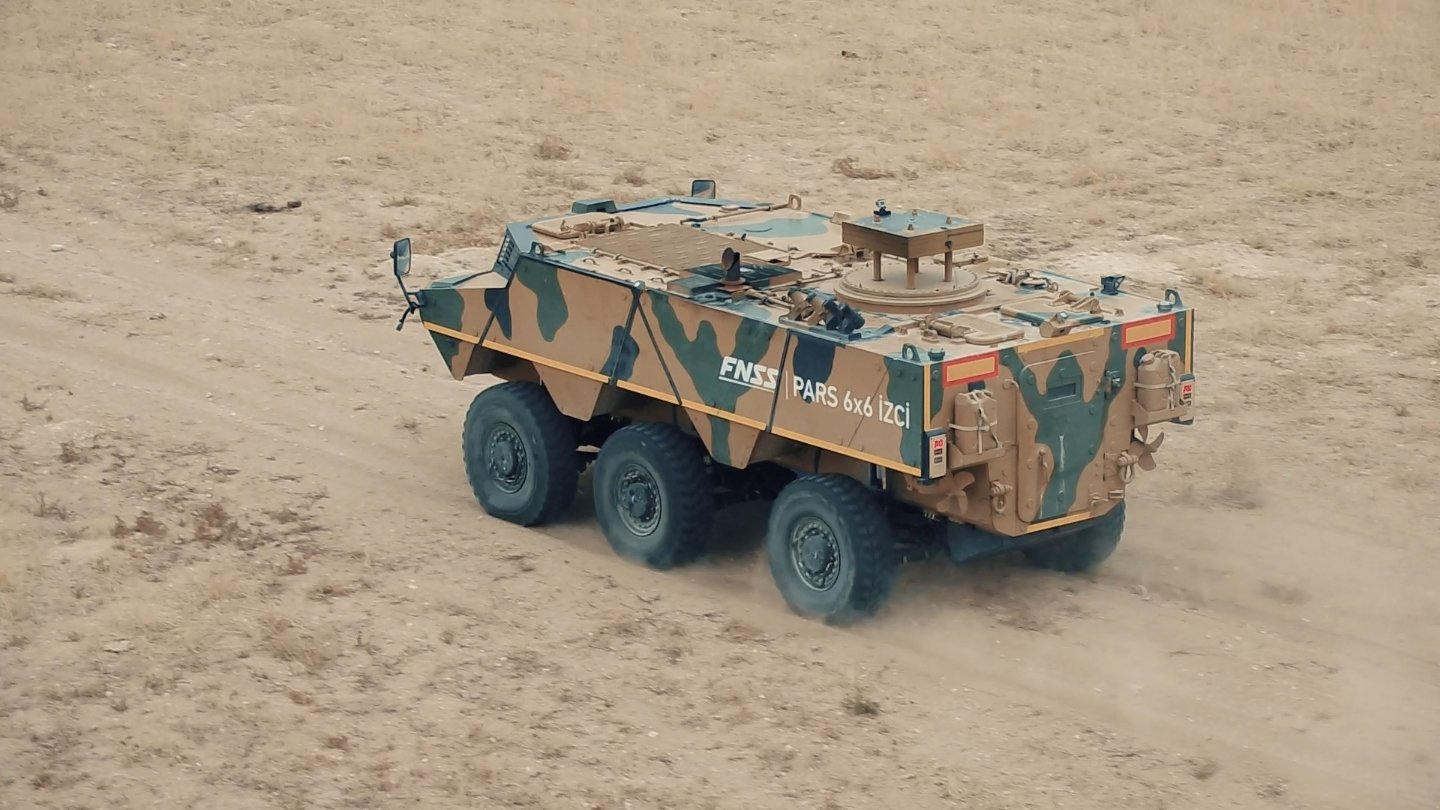 Pars Scout armored vehicle of the FNSS seen in the photo provided on March 17, 2021. (Courtesy of FNSS)
by DAILY SABAH WITH AA Mar 17, 2021 2:12 pm
Edited By Ayşe Betül Bal
RECOMMENDED

The vehicles will be used by the Turkish Land Forces Command (KKK) and Gendarmerie General Command under a contract for the Special Purpose Tactical Wheeled Armored Vehicles (SPTWAV) project, signed between the FNSS and the Presidency of the Defense Industries (SSB).

Following the signing of the contract during the 14th International Defense Industry Fair (IDEF’19), the FNSS has completed the vehicle design with holistic work and an intense production period. Initially, it is looking to deliver some 100 vehicles to the security forces in the short term.

SPTWAV project coordinator, Can Kurt, told Anadolu Agency (AA) that they developed the Pars Scout vehicle with the own resources and will manufacture the 6x6 and 8x8 vehicles in five different configurations for the KKK and the Gendarmerie.

"We will produce 100 units in the first stage. Among them, the command, radar, sensor and chemical, biological, radiological and nuclear defense (CBRN) defense vehicles will be delivered to the Land Forces Command and the armored combat vehicles to the Gendarmerie Command," he said.

"In such projects, the first phase is design and adaptation," Kurt said detailing the course of the project.

"During this period, we held a series of meetings with the procurement authority and our Land Forces. After that comes the first vehicle production and qualification period with the clarification of the needs and the correct understanding of the force's demands and the approval of FNSS' design solutions," he added.

He said the Pars Scout vehicles will also attract great attention from abroad. "The first 100 vehicles will be produced and delivered within a short one year."

"The vehicles will be used by the security forces in 2022," he said.

Also commenting on the project and the domestic production of such defense products, FNSS Research and Development (R&D) Project Leader Cihan Büyükbayram said new subsystems are being added to the local subsystems every day, depending on the overall development of the defense industry with its main and subcontractors.

Büyükbayram pointed out that, with this, foreign dependencies have decreased while pushing up competitiveness abroad. "This is undoubtedly a result of the vision and strategy put forward by SSB." He added that the country is getting to a better point every day.

However, he added that this could not be achieved in a short time. Büyükbayram noted that they attribute great importance to R&D works and allocate important equity for this, and now they have begun to reap the fruits of those developments.

"We also carry out R&D projects with our subcontractors. As a result of these, domestic subsystems are produced and we use them in our products, in our vehicles," he added.

Büyükbayram commented that vehicles must have multiple features to fulfill difficult conditions and tasks, noting that power transmission parts that can meet these requirements, as well as hydropneumatic suspension are developed with domestic capabilities for the project.

Domestically producing the engine to power such vehicles is also important and a significant item for the Turkish Defense industry, he continued, adding that "in 2021, the domestic engine qualification process will be completed and integrated and used in the Pars Scout vehicle."

These vehicles with high mobility on the ground and high speeds on the roads can provide extra capabilities for the Turkish Armed Forces, he added.