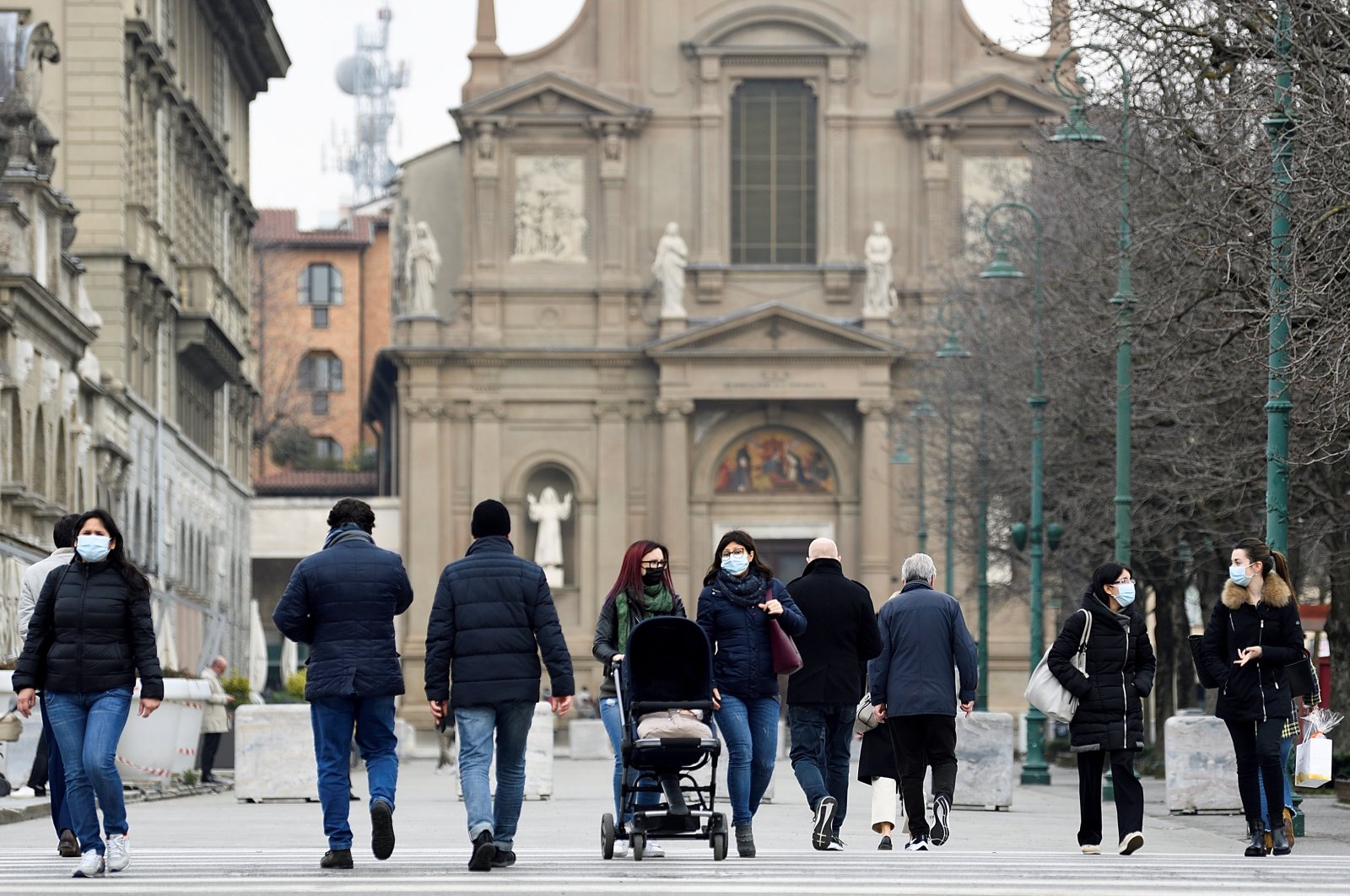 People walk on a street a year after the peak of Italy's coronavirus outbreak, in Bergamo, the country's epicenter, Italy, March 3, 2021. (Reuters Photo)
by Associated Press Jun 23, 2021 12:23 pm
RECOMMENDED

Yet out of that tragedy may come solutions for decades-old problems that have held back growth and productivity – and with them, a new sense of stability for the euro, the currency shared by 19 of the European Union's 27 members.

Backed by 261 billion euros ($311.64 billion) from the EU and the Italian government, the country's plan for recovering from the pandemic calls for a top-to-bottom shakeup of a major industrial economy long hampered by red tape, political reluctance to change, and bureaucratic and educational inertia.

Leading the charge is Premier Mario Draghi, the former head of the European Central Bank, who was tapped as head of a national unity government specifically for his economic expertise and institutional knowledge both in Italy and the EU.

The challenge is formidable: Italy has failed to show robust growth in the more than two decades since it joined the euro currency union in 1999.

Execution of the recovery plan remains a risk given Italy’s often-fractious politics. But “if they succeed with even half, it will have a big impact,” said Guntram Wolff, director of the Bruegel think tank in Brussels.

A key target is keeping more young Italians from taking their know-how abroad, a perennial issue in Italy, which has one of the lowest rates of university graduates in Europe and one of the largest brain drains.

The plan aims to create eco-systems that would help scientific discoveries find their way into the marketplace, fueling startups and industry while creating career paths that would help retain educated Italians, many of whom leave home due to low pay and limited prospects.

Velia Siciliano, who heads a biomedicine lab in Naples for the Italian Institute of Technology, said the pandemic only underlined the necessity of strong domestic research centers.

She has spent large chunks of her scientific career abroad, building on her undergraduate and master’s degrees in Italy with a Ph.D. from the U.K. and postdoctoral study at the Massachusetts Institute of Technology. She was named one of Italy’s top 10 women of the year for 2019.

Siciliano noted that Italy had already launched programs to stop brain drain with ad-hoc initiatives, but she said a key missing element has been public-private synergies that transfer research results into new inventions and innovations.

“The truth is, if they don’t nurture a system and if research doesn’t also include technology transfers, it will be difficult to have a large number of Italian researchers returning to Italy,” she said.

Universities failing to turn ideas into startups is just one of the chronic problems listed in the 270-page recovery plan. Others include too much red tape for businesses, lower levels of higher education than in many other developed countries, clogged courts and low participation of women in the workforce.

The plan would fund efforts to tackle all of these: For instance, digitizing how people use public services to cut down on wasted time and paperwork, using alternative dispute resolution such as arbitration to quickly resolve business disputes and adding 228,000-day care and preschool places to help get more women into the work force.

Of the 261 billion euros, the lion's share of 191.5 billion euros in grants and loans comes from the EU's recovery and resilience facility, part of the 27-country bloc's 806.9 billion euro pandemic recovery fund backed by common borrowing. Italy is the largest recipient because it suffered the most economic damage.

The recovery fund aims to promote long-term growth and recovery by funding economic reforms, efforts to fight climate change and the spread of digital technologies.

Right now, that's not a problem, since the European Central Bank stimulus has driven borrowing costs to record lows. But rising borrowing costs threatened the country's finances in 2011. Italy is a concern for the entire 19-country eurozone since it is too big to be bailed out by the other eurozone governments, as smaller economies such as Greece and Ireland were during the 2010-2015 debt crisis.

“It's the most important question of Europe's monetary union,” Wolff said. “The one critical issue has always been, if Italy doesn't grow, at what stage will Italian debt become a problem, not just for Italy but for the eurozone.”

Wolff said he was “cautiously optimistic” that the plan could bring about long-postponed change. The size of the support gives political leeway for the government to address deep underlying issues: "This is the first government in power in Italy that actually talks about the right reforms and has financial support from Europe to implement them, so I think there is reason to be optimistic here.”

Francesco Di Stasio, a 37-year-old researcher at a top robotics center, has left Italy twice but returned each time. He has degrees from Italian and British universities, has worked in both Italy and Britain, and has done advanced studies both at home and abroad in Spain.

Di Stasio says Italy’s problem is not that Italians go abroad – that is common in Europe and essential in the sciences. Now in a position to hire scientists for his lab developing light sources using nanomaterials, he says the real weakness in the system is the difficulty in attracting qualified applicants to Italy, be they Italians or foreigners. The question is more complex than salary.

While Italy has pockets of excellence – including relatively recent research institutes like Genoa-based Italian Institute of Technology, where Di Stasio works – what it is lacking are fuller ecosystems on par with more competitive economies like Germany, Britain or France, where researchers in scientific and technological fields can see places to jump every few years as they pursue a career path.

“The doubt is more present. When I search for people, they worry about the future. They don’t know how to access a career path in Italy,’’ Di Stasio said. “What plays against us is the perception we have of Italy.”