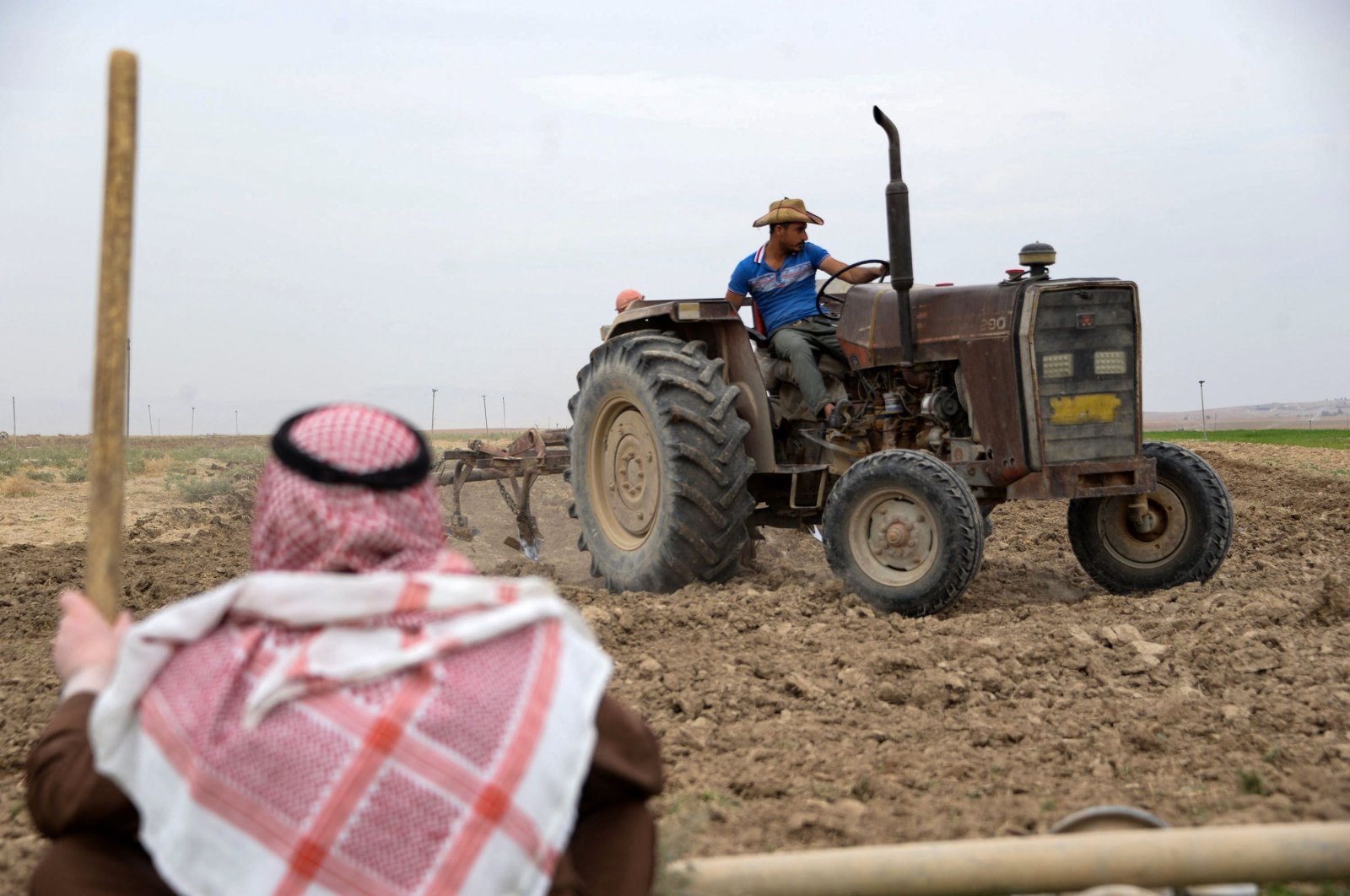 An elderly man watches a farmer plow the land with the help of a tractor, on the outskirts of the town of Tel Keppe (Tel Kaif) north of the city of Mosul in the northern province of Nineveh, Iraq, Oct. 26, 2021. (AFP Photo)
by Agencies Nov 14, 2021 1:28 pm
RECOMMENDED

Iraqi wheat farmer Khamis Ahmad Abbas lost it all when his battle with drought forced him to abandon his land, pushing him into unemployment.

Experts have warned that record low rainfall, compounded by climate change, are threatening social and economic disaster in war-scarred Iraq.

"Growing wheat and barley is a gamble. It all depends on the rain," said the 42-year-old father of nine.

Unable to make ends meet, Abbas quit his land in the Plains of Nineveh, northeast of Mosul, part of the so-called Fertile Crescent where agriculture was born 12,000 years ago.

Three months ago, he packed up his family – two wives and nine children – and moved to Mosul.

"Now I am unemployed," he told the Agence France-Presse (AFP), as he whiled away the time in a coffee shop in Iraq's second largest city.

Once the seat of the Daesh terrorist group's self-styled "caliphate," Mosul is still rebuilding after the devastating 2017 battle which ousted the terrorists.

"Sometimes I get small jobs, just enough to feed my family," said Abbas bitterly, who longs for the old days when he harvested wheat and barley like his father and grandfather before him.

His plight is shared by many farmers in the Nineveh Plains.

According to the International Organization for Migration (IOM), 447 families who were forced from their land in Nineveh by Daesh and then returned to it after the terrorist group's defeat were forced to leave again between June and July this year because of the drought.

"Nearly all, if not all, the families were displaced due to inability to feed their cattle," the IOM said.

But this year, Nineveh province has been Iraq's "most affected" by drought and exceptionally high temperatures.

In 2020, 927,000 tons of wheat were harvested in Nineveh, making it a "self-sufficient" province, said Abdelwahab al-Jarjiri, who heads the local cereal authority.

This year production plunged to 89,000 tons because of the drought.

The effects of low rainfall have been exacerbated by falling water levels on the Tigris and Euphrates rivers due to dam-building in neighboring Turkey and Iran, said Samah Hadid of the Norwegian Refugee Council (NRC).

Iraq's water crisis has been in the making for nearly two decades. Outdated infrastructure and short-term policies made Baghdad vulnerable to climate change and lower flows from Iran and Turkey, the sources for about 70% of the Tigris and Euphrates rivers.

Turkey says it has for years kept to its commitment in its agreement with Iraq to keep the water flowing, stressing it has been maintaining the flow it obliged to its southern neighbor, sometimes even more.

Ankara has also stressed its readiness to extend support to Iraq on water management. In 2019, Turkey appointed former Forestry and Water Affairs Minister Veysel Eroğlu as a special envoy to Iraq to resolve water-sharing issues between the two countries.

Turkey itself has been facing a severe drought, which curtailed hydroelectric power, putting idled gas power plants back online. The country depends on water from the Tigris to fill a reservoir behind its Ilısu Dam near the Iraqi border.

Previously, President Recep Tayyip Erdoğan underlined that the two countries should work together on water management to prevent a water crisis in the region.

Iraqi people have been complaining about the lack of infrastructure and corruption among government officials as the main sources of the electricity and water crisis.

"Iraq is facing its worst drought in modern times. This is due to record low levels of rainfall, reductions in water flow from its neighbors – which has primarily hit the Euphrates and Tigris rivers – and there is no doubt climate change has contributed to this crisis," Hadid said.

"Far from being a problem in the distant future, climate change is already taking effect in the region and we see this clearly in parts of Iraq," he added.

This month, a dam near the northern town of Zawita dried up completely for the first time since its construction in 2009, the head of the local irrigation authority Hega Abdelwahid said.

The dam, which used to contain up to 50,000 cubic meters (1,765,733 cubic feet) of water, was fed by melting snow but there was very little rain this year, Abdelwahid said, and all that is left is cracked earth.

The severity of the drought has forced many farming families to leave their land and seek a living in urban areas.

Akram Yassin, 28, is one of those considering such a move. He has already sold some of his 500 sheep and some land just "to survive," he said.

"I might have to change careers, my financial losses are more than my gains," he added.

In October, United Nations agencies, including the Food and Agriculture Organization (FAO), called for "urgent action" to avert a disaster in Iraq.

Before that on Aug. 13, aid organizations, including the NRC, warned that 7 million people in Iraq risk losing access to water, forcing more from their homes.

But the exodus to urban centers like Mosul, Kirkuk and Basra could spark "instability" because they are ill-prepared for such an influx, said Roger Guiu, director of the Iraq-based Social Inquiry research center.

Guiu said Mosul had been left in ruins by the monthslong battle to oust Daesh and "reconstruction has been slow."

The city's roads and sewers have been rebuilt but in the health sector only 30% to 40% of services have been rehabilitated, District Prefect Zuhair al-Araji told AFP.