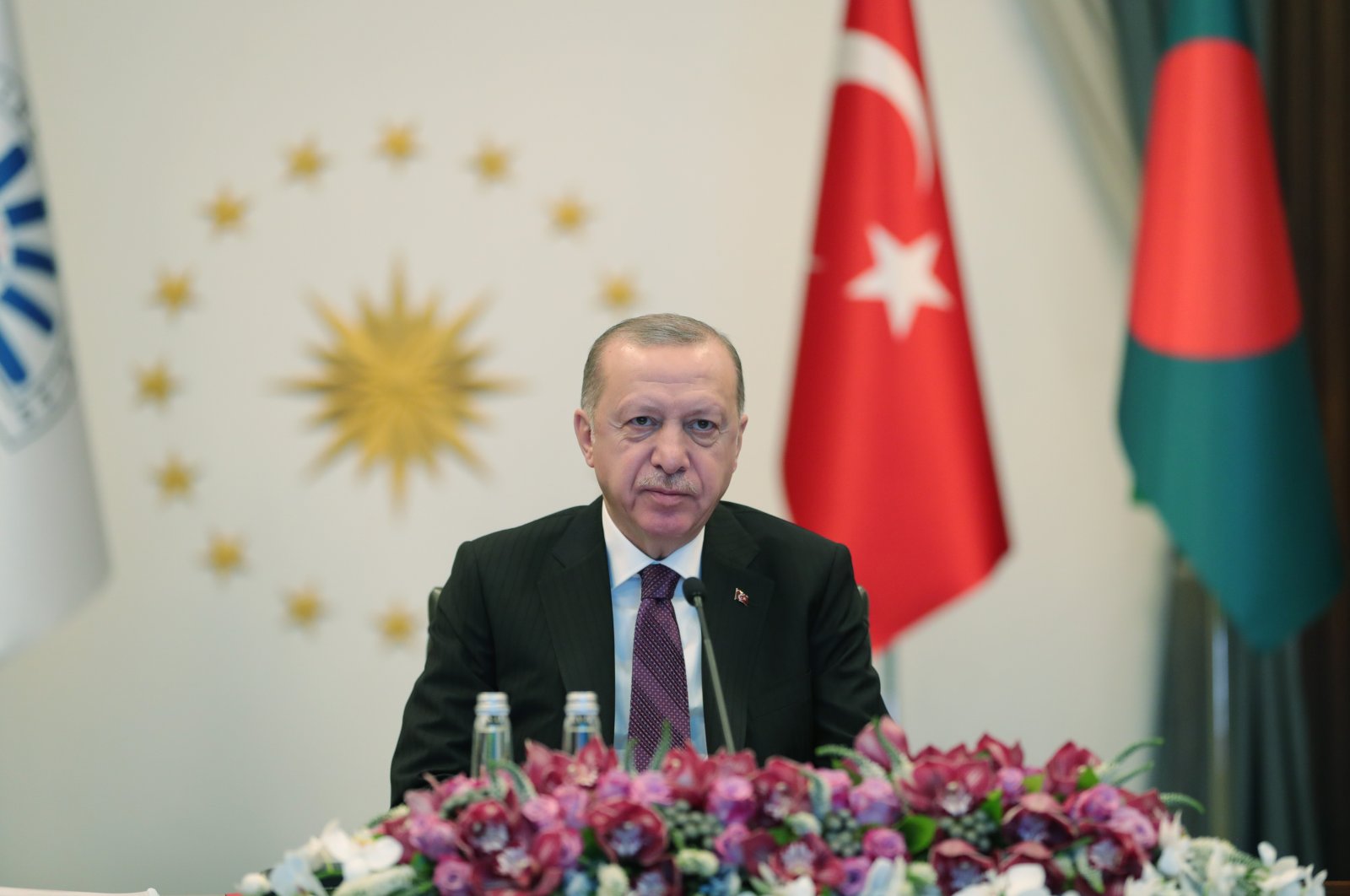 President Recep Tayyip Erdoğan on Thursday pushed for a “megabank” idea that he said could meet the liquidity requirements of Islamic financial institutions as well as financing for infrastructure projects.

“We believe that the idea of an Islamic megabank based on an online platform can be turned into reality to meet the liquidity needs of Islamic financial institutions and the growing infrastructure financing needs of the Muslim geography at the same time,” Erdoğan told a virtual summit of the D-8 group of developing nations.

The president did not provide further details but said the D-8 Organization for Economic Cooperation should be updated to better fit current needs and be transformed into a project-and-result-oriented structure, in addition to taking steps to speed up decision-making processes.

The D-8 group is also about to start a project that includes the Islamic Development Bank to revitalize regional cooperation and trade within member states, its secretary-general Dato Ku Jaafar Ku Shaari said last month.

Erdoğan Thursday reiterated his call for greater use of local currencies in trade among the D-8 member nations.

The president has in recent years voiced support for and held negotiations with Turkey’s top partners to increase local currency use in commercial transactions, particularly bilateral trade.

The president suggests this would minimize forex pressure inherent in U.S. dollar-based trade.

“In order to protect our countries from currency risks, it is essential that we focus on trade with local money,” Erdoğan noted.

The president suggested that switching to national currencies would revolutionize trade relations when he made his first call during the summit in Istanbul in 2017.

“The developments over the last four years have proven this call’s reliability,” Erdoğan said Thursday.

He earlier said the dollar's reign on global trade should come to an end, stressing that dependence on the greenback was becoming more of a burden instead of a convenience.

The D-8 was launched in June 1997 after then-Turkish Prime Minister Necmettin Erbakan proposed the creation of an economic group consisting of eight emerging economies from the Islamic world.

A statement following the summit said the bloc adopted a road map, namely the D-8 Decennial Road Map for 2020-2030, and the Dhaka Declaration 2021.

The nations agreed to enhance trade cooperation and bring their domestic trade volumes to at least 10% of the organization’s total trade in the next 10 years.

The group has an annual trade volume of around $1.6 trillion, of which 6.5% stems from intra-D-8 trade. It represents 4.5% of global trade and 5% of the global gross domestic product (GDP).

Yet, Erdoğan said even though the intra-D-8 trade increased sevenfold to date, it was not enough, calling on all the member nations to act to put into action the preferential trade agreement.

“It is of great importance that the D-8 Preferential Trade Agreement is put into effect by all member states at the earliest possible time,” the president noted. “As Turkey, we have prepared a strategy document to facilitate trade between the D-8 countries and conveyed it to you.”

With the road map adopted Thursday, the bloc aims to become stronger and more developed and to support the implementation of relevant strategies and action programs to help achieve the 2030 sustainability agenda set by the United Nations.

It also aims to design concrete project plans for each area of cooperation for achieving sectoral goals.

On the D-8 Network for Research and Innovation, Erdoğan called the network critically important, as it enables information sharing between universities and other institutions in fields such as renewable energy, artificial intelligence, robotics, the internet of things, big data, blockchain and nanotechnology.

He stressed that D-8 countries should concentrate on high added-value production, based on high technology, for the sake of strong and sustainable growth.

Erdoğan also highlighted the importance of cooperation in fighting the coronavirus pandemic, stressing how Turkey helped 157 countries and 12 international organizations during the outbreak.

“We have clearly stated on every platform that the vaccine, which is our greatest weapon against the virus, should not be sacrificed to interests or the profit motive,” the president said.

He added that once Turkey’s first locally produced COVID-19 vaccine is ready, it will be put in the service of all humanity.

On Turkey’s role during its D-8 term presidency, which concluded Thursday, Erdoğan stressed the country worked to strengthen the organization and to enhance regional cooperation.

During the summit, Turkey handed over the D-8 term presidency it has been holding since 2017 to host country Bangladesh.

Underlining the vast human potential in the member states’ over 1.1 billion young people, he said well-educated youths are key to being strong and influential.

Erdoğan also said Turkey supports U.N. Secretary-General Antonio Guterres’ Youth 2030 strategy and strives to lead the goals in the framework of the strategy.

The Youth 2030 strategy aims to empower young people to realize their potential.

Erdoğan said once a U.N. youth center project in Istanbul is completed, the center will be a platform that brings young people together within the organization.