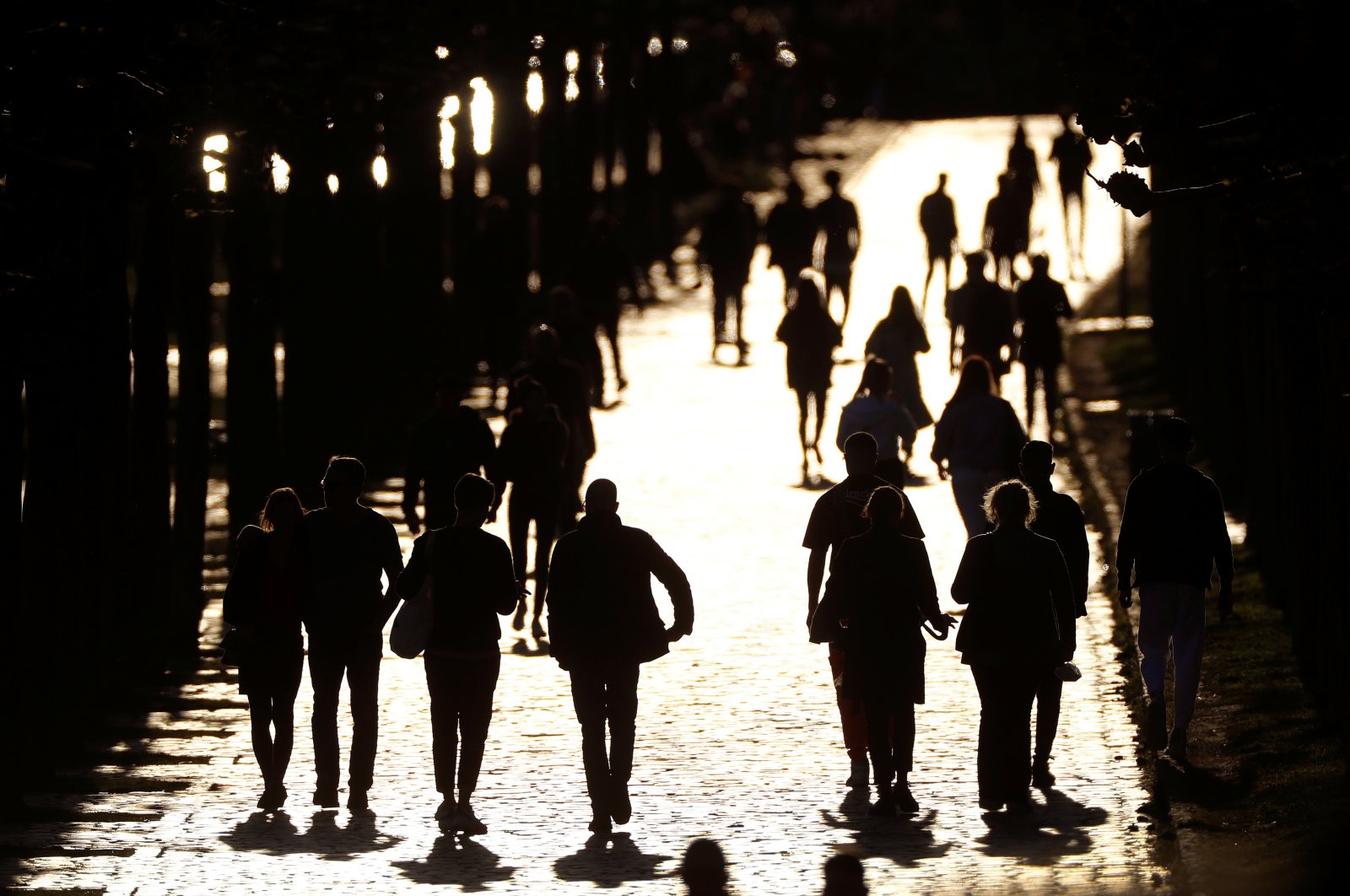 People enjoy the sunset ahead of a curfew as the spread of coronavirus continues in Frankfurt, Germany, April 23, 2021. (Reuters Photo)
by Agencies Apr 27, 2021 2:56 pm
RECOMMENDED

Germany Tuesday raised its economic growth forecast for 2021, offering a glimpse of light at the end of the coronavirus pandemic tunnel as vaccinations finally begin to gather pace in Europe's biggest economy.

The government lifted its growth forecast to 3.5% from a previous estimate of 3% as it expects household spending to support the recovery once COVID-19 restrictions are lifted, Economy Minister Peter Altmaier said.

"Today's spring projection is an encouragement despite the current serious infectious situation," Altmaier said. "This is the year when we will really see a trend reversal."

Altmaier said Berlin expected gross domestic product (GDP) to grow by 3.6% next year and the economy to reach its pre-pandemic level in 2022 at the latest.

The Ifo economic institute said on Monday that the third wave of COVID-19 cases and supply bottlenecks with chips and other industrial components were holding back the recovery and dampening Germany's business outlook.

Asked how much growth the chip shortages will cost the German economy this year, Altmaier said the impact was hard to quantify at this stage.

Several German companies have already warned that the supply problems with chips and other components will lead to weaker-than-expected production in the second quarter.

The supply bottlenecks in production and overall economic recovery are expected to push up price pressures in Germany, with the government forecasting consumer price inflation to jump to 2.2% this year and to ease to 1.5% next year.

Europe's top economy contracted by 4.9% in 2020 as the pandemic idled entire sectors and upended hundreds of thousands of businesses.

With Germany still firmly in the clutches of a third wave of the pandemic, the country is expected to report weak data for the first three months of the year.

But the pace of vaccinations is accelerating after a stuttering start, with hundreds of thousands of jabs now being administered daily.

The mass inoculations could help accelerate a return to some normality after more than a year of open and close swings to halt COVID-19.

Major economic think tanks have already delivered a more optimistic forecast than the government, having predicted growth of 3.7% for the year.

"Once the risk of infections is removed, the economy will show a strong recovery," they said.

Germany came through the first wave of the pandemic relatively unscathed, but authorities have struggled for months to put in place concerted action to stop the current wave.

The law ends a tug-of-war between the federal government and Germany's 16 states which had in recent months resulted in an often confusing patchwork of restrictions being implemented. Some states with higher infection rates allowed shops to open while others closed kindergartens.

Under the new regulation, all regions with incidence rates of more than 100 new infections per 100,000 people over the last seven days are applying shutdowns and overnight curfews.

Schools must also revert to virtual teaching in areas where the incidence rate exceeds 165.

Seven states had an incidence rate above 165 on Monday, with the national average at 169.

Altmaier said authorities should be able to lift most of the restrictions to contain the pandemic over the course of the summer.

At the same time, hopes are growing that curbs could be eased in coming weeks as the proportion of inoculated people grows.

After a start plagued by huge vaccine delivery problems, the total proportion of Germans with at least one injection has reached 23.4%.

Merkel underlined on Monday that Europe's biggest economy is aiming to offer every adult a jab from June.

"German industry is still booming and is benefitting from the fact that other regions are much further ahead with their vaccination campaigns," Brzeski told Agence France-Presse (AFP).

Massive stimulus packages unleashed by the United States, the European Union and Germany itself are expected to translate into bulging order books for the industry.

Earlier in April, official data showed German industrial orders climbing for a second month in a row in February on resurgent domestic demand.

Berlin had previously already expected its economy to return to pre-pandemic levels in 2022 at the latest.