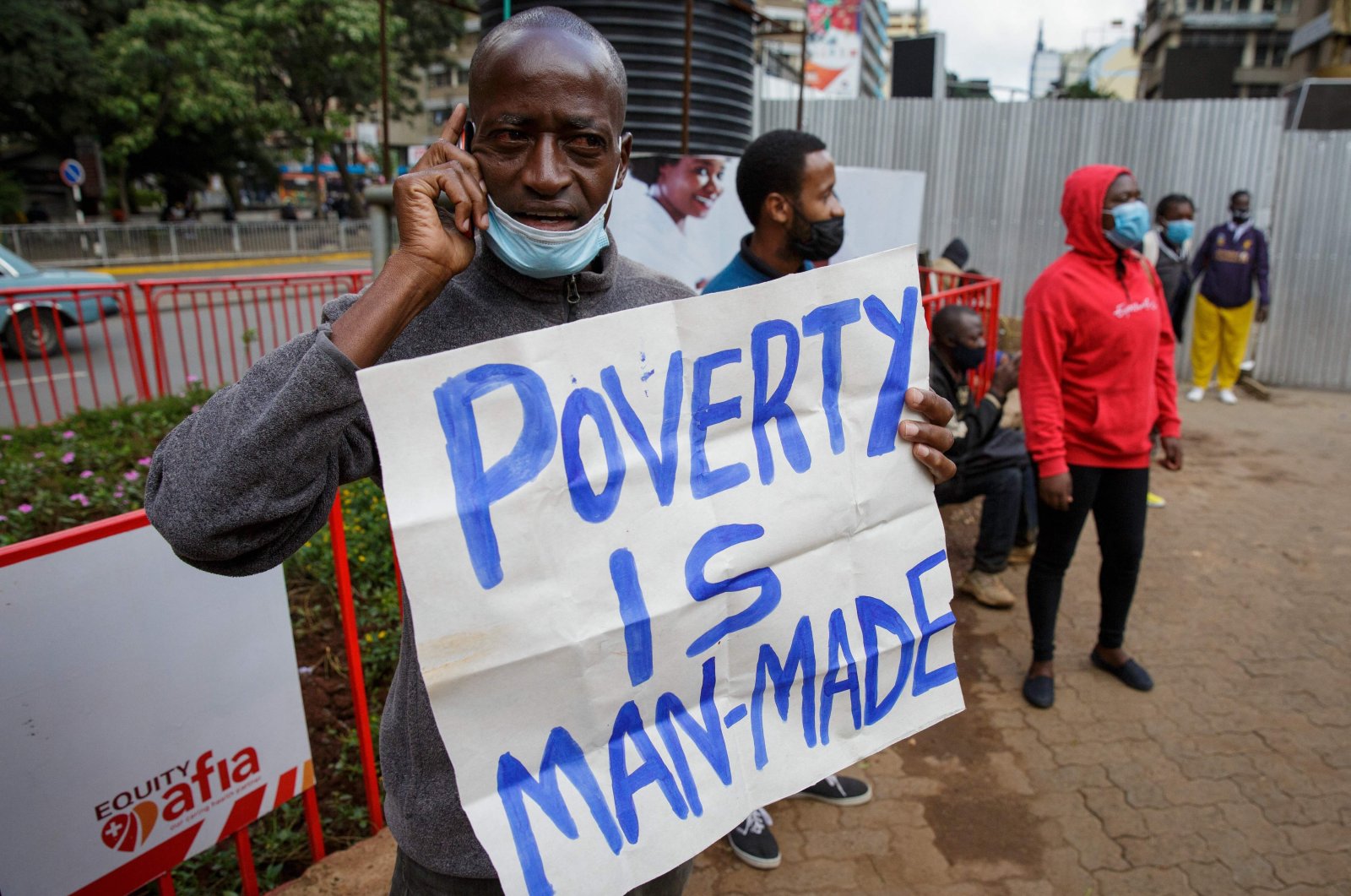 A protester holds a message "Poverty is man-made" as they demand the Kenyan government take action for better living conditions in the COVID-19 pandemic during a May Day rally marking the international labor day in Nairobi, Kenya, May 1, 2021. (AFP Photo)
by Reuters May 03, 2021 1:34 pm
RECOMMENDED

The coronavirus pandemic has hit economies worldwide on an unprecedented scale, leading to mass unemployment or income reduction across a variety of sectors. One in two people worldwide saw their earnings drop due to the coronavirus, with people in low-income countries particularly hit hard by job losses or cuts to their working hours, findings of a recent study showed Monday.

The U.S.-based polling company Gallup, which surveyed 300,000 people across 117 countries, found that half of those with jobs earned less because of COVID-19 pandemic disruptions. This translated to 1.6 billion adults globally, it said.

"Worldwide, these percentages ranged from a high of 76% in Thailand to a low of 10% in Switzerland," said researchers in a statement.

In Bolivia, Myanmar, Kenya, Uganda, Indonesia, Honduras and Ecuador, more than 70% of people polled said they took home less than before the global health crisis. In the United States, this figure dropped to 34%.

The COVID-19 crisis has hit workers across the world, particularly women, who are over-represented in low-paid precarious sectors such as retail, tourism and food services.

A study by the international charity Oxfam on Thursday said the pandemic had cost women around the world $800 billion in lost income.

The Gallup poll found that more than half of those surveyed said they temporarily stopped working at their job or business – translating to about 1.7 billion adults globally.

In 57 countries including India, Zimbabwe, the Philippines, Kenya, Bangladesh, El Salvador, more than 65% of respondents said they stopped working for a time.

Countries, where people were least likely to say they stopped working, were predominantly developed, high-income countries.

Fewer than one in 10 of those who had jobs in Austria, Switzerland and Germany said they had stopped working temporarily. In the U.S., the figure was 39%, research showed.

The poll also showed that one in three people surveyed lost their job or business due to the pandemic – translating into just over one billion people globally.

These figures also varied across nations with lower-income countries such as the Philippines, Kenya and Zimbabwe showing more than 60% of respondents lost their jobs or businesses, compared to 3% in Switzerland and 13% in the United States.