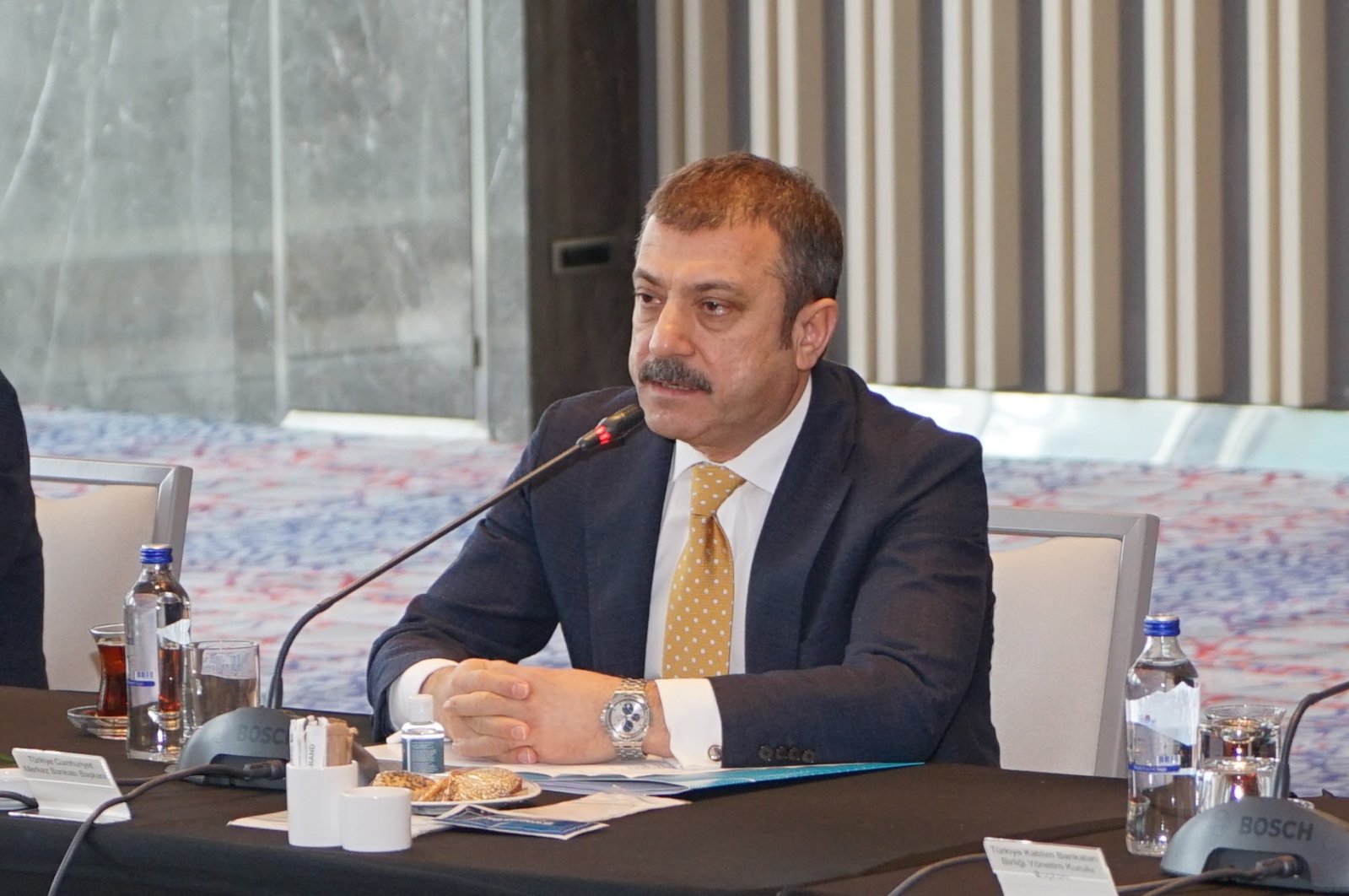 Central Bank of the Republic of Turkey (CBRT) Governor Şahap Kavcıoğlu during a meeting with general managers from a few banks, Istanbul, Turkey, March 24, 2021. (CBRT via DHA)
by DAILY SABAH WITH AGENCIES Mar 29, 2021 1:05 pm
RECOMMENDED

Turkey’s newly appointed central bank governor Monday said he does not think “prejudiced” expectations of an interest rate cut in April or the following months are right.

“I do not approve a prejudiced approach to MPC (Monetary Policy Committee) decisions in April or the following months, that a rate cut will be delivered immediately,” Central Bank of the Republic of Turkey (CBRT) Governor Şahap Kavcıoğlu told Bloomberg in the first interview since his appointment two weeks ago.

Kavcıoğlu will head his first MPC meeting next month. His appointment came two days after the CBRT hiked its benchmark policy rate by a larger-than-expected 200 basis points to 19% on March 18. It called the increase a “front-loaded” move to tackle rising inflation and support the Turkish lira.

Kavcıoğlu replaced Naci Ağbal, under whom the bank tightened the one-week repo rate by 875 basis points since November with a hawkish stance against inflation.

The governor was quoted as saying the bank remains strongly committed to its 5% inflation target. He said the bank would continue to use its tools independently to lower inflation, which edged higher to 15.6% in February, its highest since mid-2019.

Treasury and Finance Minister Lütfi Elvan has said Turkey was determined to stick to free-market rules and a free-floating currency regime, pledging that the country would maintain its macro policy, prioritizing disinflation with determination until a permanent drop in inflation is achieved.

“In the new period, we will continue to make our decisions with a corporate monetary policy perspective to ensure a permanent fall in inflation. In this respect, we will also monitor the effects of the policy steps taken so far,” Kavcıoğlu said.

The lira was up about 0.7% at TL 8.08 against the dollar Monday following Kavcıoğlu’s remarks.

He again pledged to stick to the single-rate policy framework, adopted by his predecessor.

In his second high-profile meeting, the governor last week was cited as promising to continue to use the one-week repo rate as the main policy tool and maintain the current operational framework.

Ağbal had simplified the bank’s monetary policy and all funding has been provided through the main policy rate, i.e. the one-week repo rate.

Kavcıoğlu said he found it wrong to comment on earlier decisions of the central bank both “in principle and ethically.”

He reiterated his message from last week as he said the bank would take into account the inflation outlook, real interest rates offered by peer countries, global capital outflows and residents’ portfolio preferences when determining a monetary policy stance.