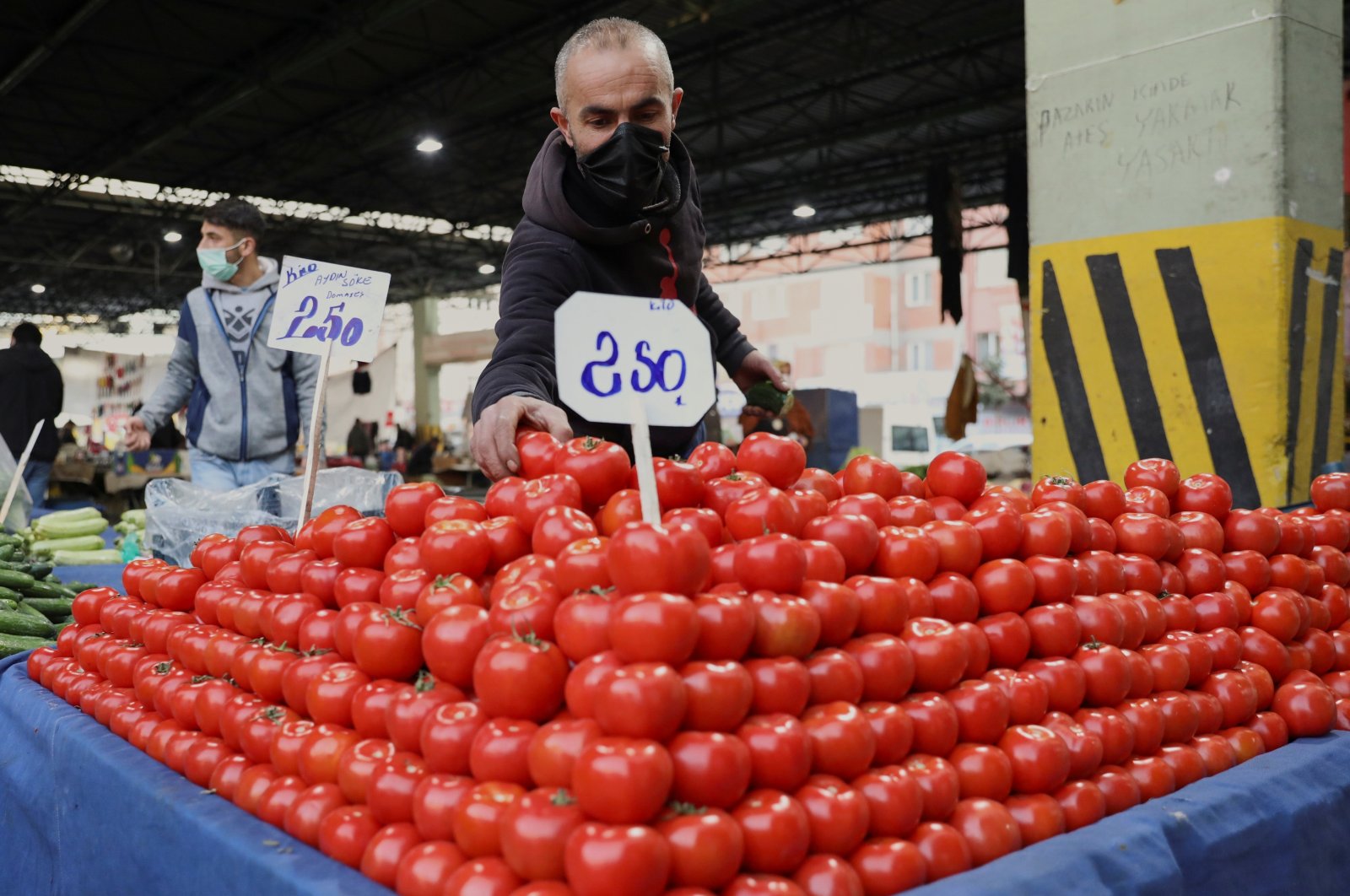 A vendor wearing a protective mask waits for customers at his stall at a local market amid the COVID-19 outbreak in Ankara, Turkey, Feb. 24, 2021. (Reuters Photo)
by DAILY SABAH WITH AGENCIES Mar 03, 2021 10:07 am
RECOMMENDED

Turkey’s annual inflation rose more than expected to 15.61% in February, the highest since mid-2019, according to official data on Wednesday, keeping pressure on the central bank to maintain one of the tightest monetary policies globally.

Month-on-month, consumer prices rose 0.91% in February, according to the Turkish Statistical Institute (TurkStat).

Turkish inflation has been stuck in double digits for most of the last four years and has edged higher the last four months despite sharp interest rate hikes late last year. It stood at 14.97% in January.

The median estimate in a Reuters poll of 16 economists for the annual consumer price inflation in February was 15.39%, with forecasts ranging between 15.10% and 15.70%.

A Bloomberg survey of 21 economists had forecast the inflation to rise to 15.4%, while Anadolu Agency (AA) poll projected it to reach 15.45%.

The producer price index rose 1.22% month-on-month in February for an annual rise of 27.09%, the data showed.

The lira rose on Wednesday as surging consumer prices called for monetary policy to remain tight. The currency firmed 0.4%, with gains so far this week putting it back in the black for the year.

The Istanbul Chamber of Commerce (ITO) said the annual inflation in Istanbul increased to 15.5% last month, up from 15.1% in January, with evidence that food-price gains may be above seasonal averages.

Below are some highlights from the inflation data:

The upward trend in consumer prices is said to increase the likelihood that borrowing costs surge again before the end of June.

Since Naci Ağbal was appointed governor in November, the Central Bank of the Republic of Turkey (CBRT) has hiked its key rate to 17% from 10.25%, giving Turkey the tightest policy of any major developed or emerging market economy. The benchmark rate was held steady in January and February meetings.

Rate cuts are expected later in the year, yet some analysts expect a hike later this month to address inflation and a sharp drop last week in the lira, which raises import prices.

Inflation to peak in April

Özlem Derici Şengül, a founding partner of Spinn Consulting in Istanbul, said inflation will likely drift above 16% or even higher by April. “This might prompt the central bank to take an action to curb inflation expectations,” she told Reuters.

Ağbal has promised to raise rates more if needed to ensure inflation drops to 9.4% as the bank forecasts by year-end.

Economists expect inflation to begin falling gradually after April, with a Reuters poll year-end estimate of 10.90%.

“Inflation continues to increase due to both domestic factors and pressures from international commodity prices, said Enver Erkan, Istanbul-based economist at Tera Yatırım.

Food inflation continues to be a problem, Erkan said in a note. “Considering that the increase in global commodity prices will bring inflation pressure spread to the world, the worst has not passed in inflation as of this month,” he noted.

Erkan also noted that the high level of uncertainty in inflation is currently the most challenging issue for the CBRT, saying there is a high possibility that the bank could take a proactive step at its next Monetary Policy Committee (MPC) meeting on March 18.

“If there is another rate hike, it will likely be the last one” in this cycle, he noted.