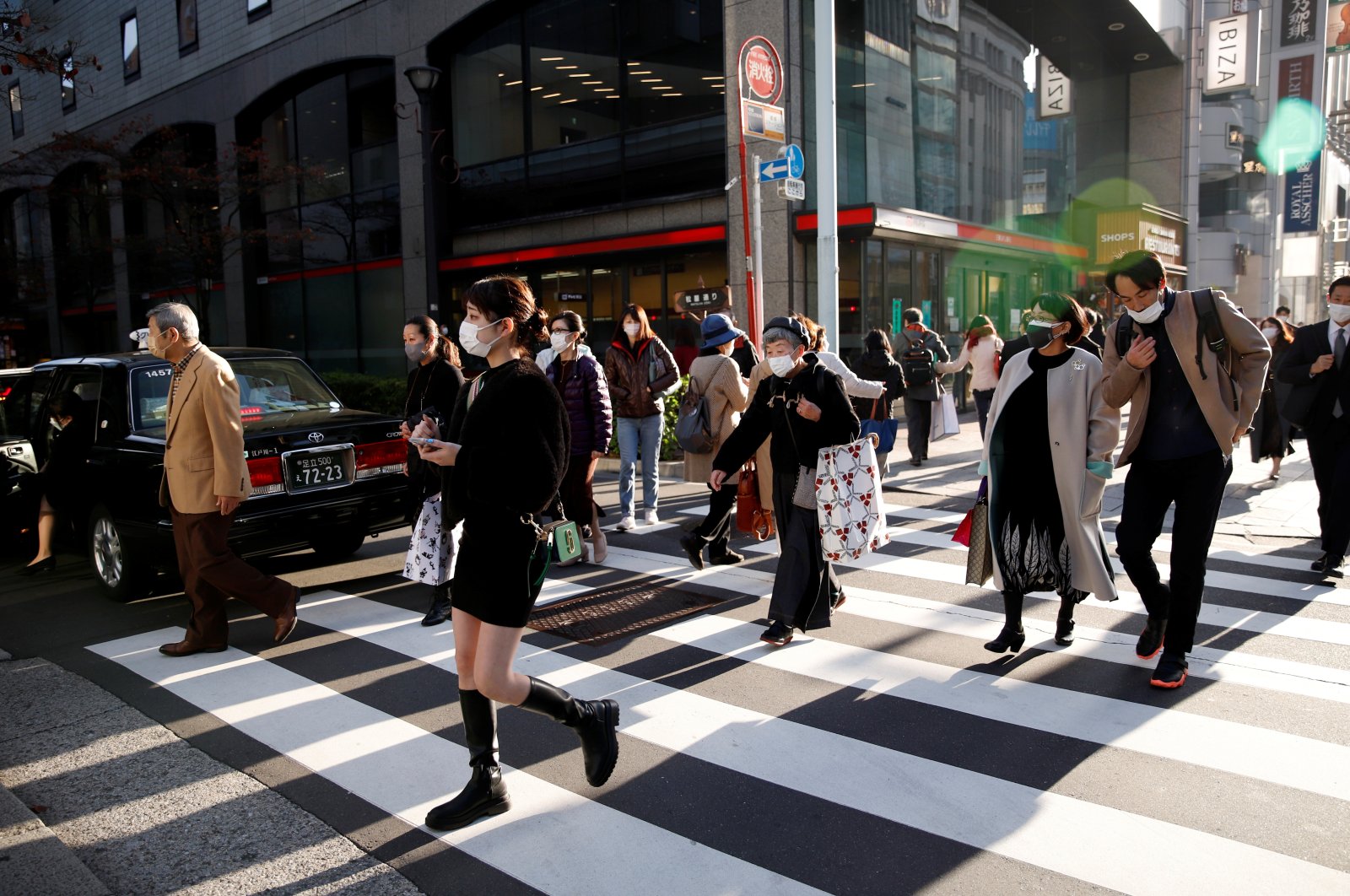 People cross the street in the Ginza shopping area, on the first day of Japan's closed borders to prevent the spread of the omicron variant of the coronavirus, in Tokyo, Japan, Nov. 30, 2021. (Reuters Photo)
by French Press Agency - AFP Nov 30, 2021 10:26 am
RECOMMENDED

The global economy has taken yet another hit just as it was recovering from the blow of the COVID-19 pandemic with the quickly spreading omicron variant prompting a raft of fresh travel restrictions.

First reported to the World Health Organization (WHO) in South Africa less than a week ago, the new strain has rapidly spread everywhere from Africa to the Pacific, and from Europe to Canada, causing dozens of countries to announce travel restrictions.

The severity of the economic impact will depend on how dangerous the variant proves to be and how well existing vaccinations stand up to it.

That has meant that even with the most favorable scenarios in mind, economists are already revising their 2022 forecasts downward.

The International Monetary Fund (IMF), which expects growth of 4.9% for the next year, has been insisting for months that the coronavirus and its variants remain the main threat.

The economic impact could be "modest," to the tune of 0.25 percentage points on global growth in 2022, if omicron causes "relatively mild symptoms" and the vaccines are "effective," said Gregory Daco, chief economist at Oxford Economics.

In the worst-case scenario, in which omicron proves extremely dangerous and large swaths of the world are in lockdown again, 2022 growth could fall to around 2.3%, as compared to the 4.5% expected by Oxford Economics before the variant emerged.

And in such a scenario it is not certain that governments, which have issued trillions of dollars in aid since the start of the pandemic, would be willing to put in place further fiscal stimulus packages, especially if vaccines are available, Daco said.

Those aspects "are going to be really key to how it affects the global economy and people's behavior," said Erik Lundh, an economist at The Conference Board.

Beyond government measures to contain the new strain, fear of infection could lead people to limit their own travel and economic activities, such as going to restaurants and reducing consumption, which will in turn impact growth, Lundh said.

Another risk is the exacerbation of the global supply chain crunch. Lundh pointed out that "a lot of air cargo is stored basically in the belly of passenger planes ... It's not just all sorts of FedEx planes."

"So if there are cancellations, if there's a lapse in demand for commercial flights for passengers, it does run the risk of limiting the route of trade," which could in turn worsen inflationary pressures as goods become more scarce.

In addition, a wave of Omicron infections "could cause some workers to temporarily exit the workforce and deter others from returning, making current labor shortages worse," said Neil Shearing, chief economist at Capital Economics, in a note.

Omicron has sparked more anxiety than any other variant since the emergence of delta, itself already much more contagious than previous strains.

United States President Joe Biden, however, said Monday that there was "not a cause for panic," even if the United States has closed its borders to travelers from Southern Africa where the variant was first detected.

As for vaccine manufacturers AstraZeneca, Pfizer-BioNTech, Moderna and Novavax have expressed confidence in their ability to combat the variant.

However, the threat of a potentially more serious variant will complicate the task of central banks, which could "postpone plans to raise interest rates until the picture becomes clearer," said Shearing.

The Federal Reserve is due to meet on Dec. 15, with several others, including the European Central Bank (ECB) and the Bank of England meeting the day after.

Pfizer CEO Albert Bourla said it will be a few weeks before drug makers know most of what they need to know about the new strain.

In the meantime, "uncertainty is damaging," said economist Daco.

"Every time you come back to a climate of uncertainty and fear, it slows down the recovery of the world economy."

On Monday, Fed Chairperson Jerome Powell himself warned that omicron is a risk for the U.S. economy, which together with China and the European Union is one of the engines driving the global economy.