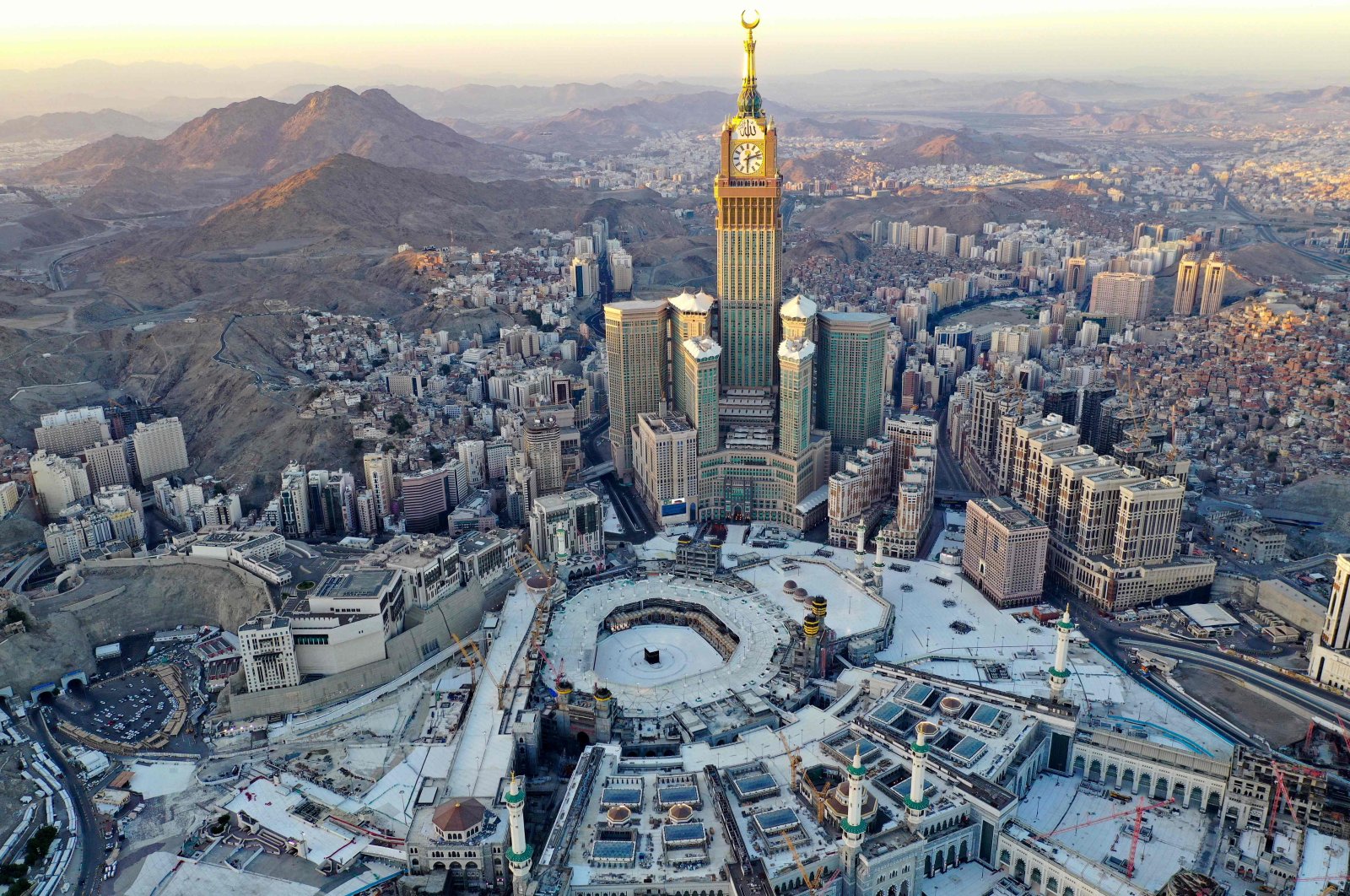 An aerial view shows the Great Mosque and the Mecca Tower, deserted on the first day of the Muslim fasting month of Ramadan, in the Saudi holy city of Mecca, April 24, 2020. (AFP Photo)
by French Press Agency - AFP Jun 28, 2020 2:49 pm
RECOMMENDED

Islam's holiest city usually hosts millions of pilgrims for the annual rite, but the kingdom has barred overseas visitors from this year's event, scheduled for late July.

The hajj and the Umrah pilgrimage together rake in some $12 billion, keeping the economy humming in Mecca, home to 2 million people and marble-bedecked skyscrapers towering over Islam's most sacred sites.

A construction boom in recent years has added shopping malls, apartments and luxury hotels, some offering spectacular views of the sacred Kaaba, a cube-shaped structure in the Grand Mosque toward which Muslims around the world pray.

But most premises have lain empty since the pandemic reached the kingdom.

The virus, which hit Mecca hard, has also battered pilgrimage-reliant businesses that support hundreds of thousands of jobs, from travel agents to street barbers and souvenir shops.

Many have reported sweeping layoffs, pay cuts or delayed salaries.

"Zero sales, zero income," said Ahmed Attia, a 39-year-old Egyptian who works for a travel agency in the city.

"We're not used to seeing Mecca empty. It feels like a dead city. It's devastating for Mecca."

A tsunami of cancellations has also battered overseas hajj operators who organize travel logistics for pilgrims, many of whom invest their life savings in the five-day ritual.

Saudi authorities had already in March suspended the Umrah pilgrimage, which can be performed at any time.

Then, in a hugely sensitive but long-awaited decision, they said they would only allow around 1,000 pilgrims already present in the kingdom to perform the hajj.

That is a tiny fraction of the 2.5 million pilgrims who attended last year.

"It will be a symbolic event, a photo-op that allows the kingdom to say 'we didn't cancel the hajj as many expected'," said a South Asian official in contact with hajj authorities.

Saudi Arabia has stressed that the watered-down hajj will be open to people of various nationalities.

But the selection process for the few spots is expected to be hotly contested, as some Mecca residents expect to be given priority over outsiders.

"I have gone to hajj before, and hopefully this year, with God's will, I will be among the first pilgrims," said Marwan Abdulrahman, a Saudi living in Mecca.

Many feared the pilgrimage, which packs colossal crowds into small religious sites, could have been a massive source of contagion.

The coronavirus has hit the kingdom with the highest number of cases in the Gulf – more than 178,000 confirmed infections including 1,511 deaths.

But scaling the pilgrimage back will deepen the kingdom's economic slump, analysts say.

The move follows a sharp downturn in oil prices and coronavirus-led losses, which triggered austerity measures including the tripling of a value-added tax and cuts to civil servants' allowances.

On Wednesday, the International Monetary Fund warned the kingdom's GDP will shrink by 6.8% this year – its worst performance since the 1980s oil glut.

The Saudi Binladen construction group, a bellwether known for vast mega-projects, has missed salary payments for thousands of workers in recent months, according to a source close to the company and employees complaining on social media.

The Arabic hashtag "Delays in Binladen salaries" has gained traction as the slowdown impacts the firm behind a series of critical projects, including a $15 billion skyscraper hotel complex that towers over Mecca's Grand Mosque.

The company is seeking to charter a number of private jets to send many of its laid-off South Asian laborers home, according to the source.

The company did not respond to a request for comment.

The downturn has also disrupted Riyadh's ambitious plans to build a tourism industry from scratch, a cornerstone of the Vision 2030 reform program to reduce the kingdom's reliance on oil.

"The government has singled out tourism as a key area for growth under its diversification strategy, and the loss of hajj revenues could set the sector back through lost investment or bankruptcies," said Robinson.

The kingdom began offering tourist visas for the first time last September in moves to open up one of the last frontiers of global tourism.

"While Saudis are looking to diversify tourism revenues beyond religious tourism, their efforts still build from the hajj," said Kristin Diwan of the Arab Gulf States Institute in Washington.

"Not having it at this time of disruption in oil markets is a blow."