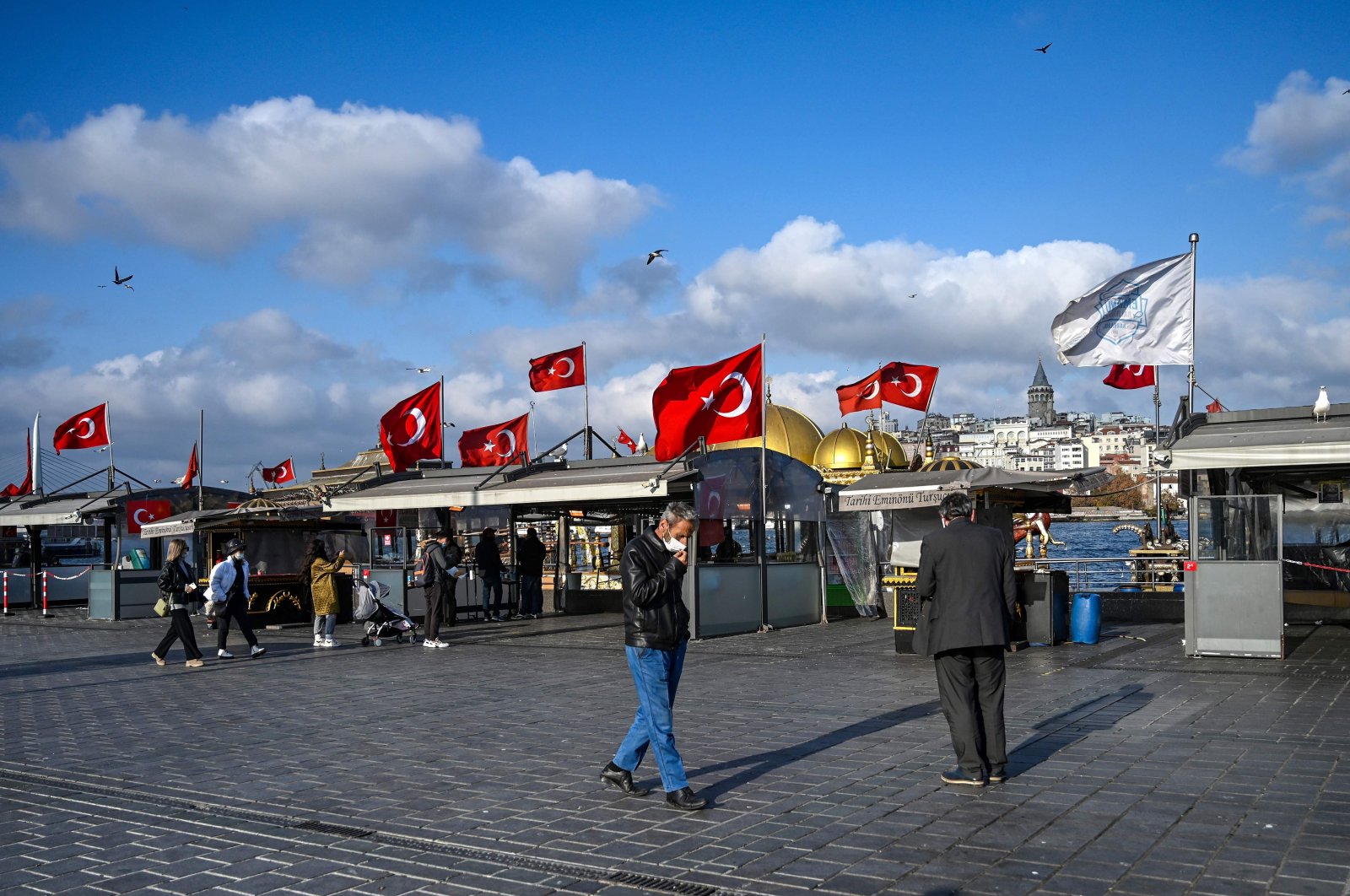 People walk in a deserted Eminönü Square in Istanbul near closed food stalls during a weekend curfew aimed at curbing the spread of the COVID-19 pandemic, Turkey, Dec. 6, 2020. (AFP Photo)
by DAILY SABAH Dec 07, 2020 4:33 pm
RECOMMENDED

Turkey expects to end 2020 with positive economic growth despite the restrictions the country recently reimposed to combat the spread of the coronavirus outbreak, and the country aims to ensure a strong rebound next year, Vice President Fuat Oktay said Monday.

The main aim of the 2021 budget is to provide stable and predictable steps for the progress of Turkey’s economy in the global restructuring due to the pandemic, Oktay said during a presentation on the 2021 budget to the Parliament for debate.

“In this context, the goal of our budget is that our new country takes the place it deserves on a global scale in the new normal,” the vice president said.

“Despite the pandemic restrictions that have been reintroduced, we anticipate closing the year 2020 with positive growth,” Oktay said, stressing that leading indicators for October and November supported that expectation.

The economy fared much better than its peers in the July-September quarter, in a stronger-than-expected rebound from a contraction in the spring.

Driven by fiscal stimulus and the lifting of virus-related lockdowns, gross domestic product (GDP) grew 6.7% year-on-year in the third quarter, after contracting by 9.9% in the previous three months when lockdowns were imposed to curb the initial coronavirus wave.

Oktay stressed that the government aims to ensure a rebound in 2021.

“In 2021, we aim to ensure that growth displays a balanced outlook between domestic and foreign demand and that our economy grows by 5.8%,” Oktay said.

The total value of the steps to support the economy from the coronavirus fallout reached TL 562 billion ($71.6 billion) as of November, Oktay said.

As part of the relief package announced in March, the government provided financial support to cushion the economic fallout from the outbreak. It had slashed taxes for hard-hit sectors and unlocked funding for workers.

As part of measures to support businesses, the country had postponed debt payments and reduced the tax burden on various sectors. It put forth a scheme that provides wage support to employees of companies who have been hit by the pandemic.

Oktay said the government expects employment to rise by approximately 1.6 million people and the unemployment rate to fall to 12.9%.

The country’s unemployment rate came in at 13.2% in August with a decrease of 0.8 percentage points year-on-year, according to official data.

"One of our main goals is to permanently reduce inflation to low and single digits, with the implementation of policies which have been developed as a result of wide-ranging consultations with various sectors of society and the policies envisaged in the New Economic Program," he said.

The government program was announced this September.

Turkey’s annual inflation jumped by more than expected to 14.03% in November, its highest since August 2019, keeping up the pressure for tight monetary policy after a sharp rate hike last month.

The country's annual inflation jumped by more than expected to 14.03% in November. Month-on-month, consumer prices rose 2.3% in the month.

Oktay stressed the global economy was facing the most serious shock in recent history.

“Both production and consumption have fallen at the same time in this process, millions of people in the world have been left unemployed, and despite all the measures taken, the resulting destruction still continues,” Oktay said.

According to its October Global Economic Outlook Report, the International Monetary Fund (IMF) expects the global economy to contract by 4.4% this year.

“This is the deepest contraction in the world economy since the 2009 global crisis,” Oktay said.

On efforts to develop vaccines to combat the virus, Oktay said Turkey’s government supported the domestic production of drugs to treat COVID-19 and that local coronavirus vaccine studies reached the stage of human trials.