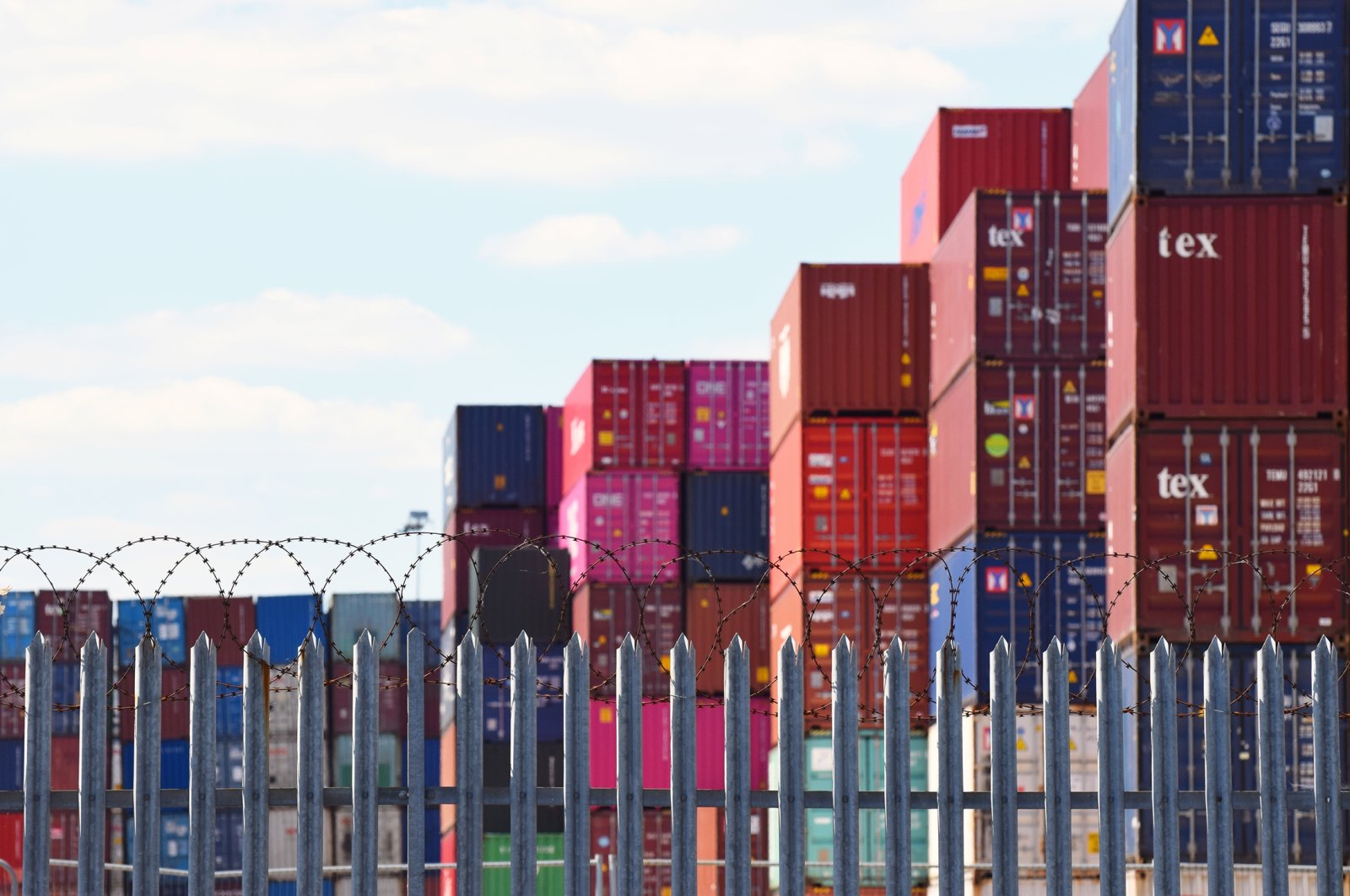 Freight shipping containers piled up high behind a fence topped with barbed wire in one of the U.K.'s busiest ports, Southampton, U.K., May 31, 2020. (Shutterstock Photo)
by DAILY SABAH Aug 05, 2021 3:21 pm
RECOMMENDED

Although the statistics covering the entire post-Brexit period have not been released yet, the preliminary data shows that the trade between Turkey and the United Kingdom has emerged stronger from this process, British Ambassador to Ankara Dominick Chilcott said Thursday.

Speaking to Turkish business news daily Dünya, Chilcott said he expects bilateral trade to return to the pre-pandemic level in a short time despite the overlapping of the two shocks, namely Brexit and the COVID-19 pandemic.

The U.K. is one of Turkey's major trading partners. Turkey's exports to the country increased by 47.7% in the January-May period following the post-Brexit free trade agreement (FTA).

Commenting on this, the British diplomat said there is a great interest in Turkish goods in his country.

“Completing the FTA, ratifying it after a few months and putting it into full implementation ensured the continuity of the trade flow. The new FTA also removed uncertainty, something businesses on both sides were rightly concerned about. Businesses will continue to benefit from nonscheduled access for exports from both sides,” he said.

The existing FTA – signed Dec. 29, 2020, as a new years’ gift to businesses – is also expected to be expanded to cover areas such as investment and services.

Chilcott said there are important areas of economic activity that are not covered by the agreements between Turkey and the European Union, and that “we should definitely look at how we can facilitate and expand our trade in these areas.”

“The implementation of the FTA is an important achievement, but both sides want to take it much further. Accordingly, there is an evaluation provision that foresees the start of negotiations for a comprehensive FTA before the end of 2022. This assessment will cover areas such as trade in agricultural products, trade in services, investment and the digital economy, among other areas,” he underlined.

As for the business potential between the two countries, Chilcott said high-value manufacturing sectors such as the pharmaceutical, automotive, aerospace, chemical and electrical/electronic industries, bear enormous potential for close collaboration with Turkish businesses.

Speaking on where Turkey stands in terms of tackling climate change, although the country has not yet ratified the Paris Agreement, and this process’ impact on the country’s trade with the U.K. and the EU, Chilcott said British Prime Minister Boris Johnson defined the fight against climate change as his top international priority.

Saying that they will host the COP26 climate change conference in Glasgow in November, he hopes the international community will make commitments to cut greenhouse gas emissions from the world's largest economies, including Turkey.

“Turkey has made significant progress in the areas of clean energy and zero waste. But like many of us, Turkey needs to do more. The EU's Green Deal envisions imposing new tariffs on goods imported from countries that have not done enough to reduce their emissions. Therefore, the efforts of European countries to decarbonize and move toward clean economies present an opportunity for Turkey, but also carry some kind of risk,” Chilcott said. He emphasized, “A Green Turkey with energy-efficient products and renewable energy at its core will further strengthen its position as Europe's manufacturing hub.”

The U.K. ambassador, answering a question regarding Britain’s current travel restriction toward Turkey, one of the favorite destinations for British holidaymakers, said it is difficult to predict when travel will return to pre-pandemic levels since the “pandemic is full of surprises.”

U.K.’s COVID-19 traffic light system – in which Turkey is still under the red category – classifies countries according to their risk status to protect public health.

“The system was designed to be as neutral as possible. I hope everything returns to normal as soon as possible. There are many good reasons why Turkey is such an attractive holiday destination for us. As soon as we get over the pandemic, it won't be long before we catch or even exceed pre-COVID-19 levels,” Chilcott said.

The U.K. is Turkey's third-largest tourism market. The U.K. Wednesday updated its travel restrictions, however, Turkey has remained on the “red list,” while Bahrain, India, Qatar and United Arab Emirates (UAE) have moved to the “amber list.”