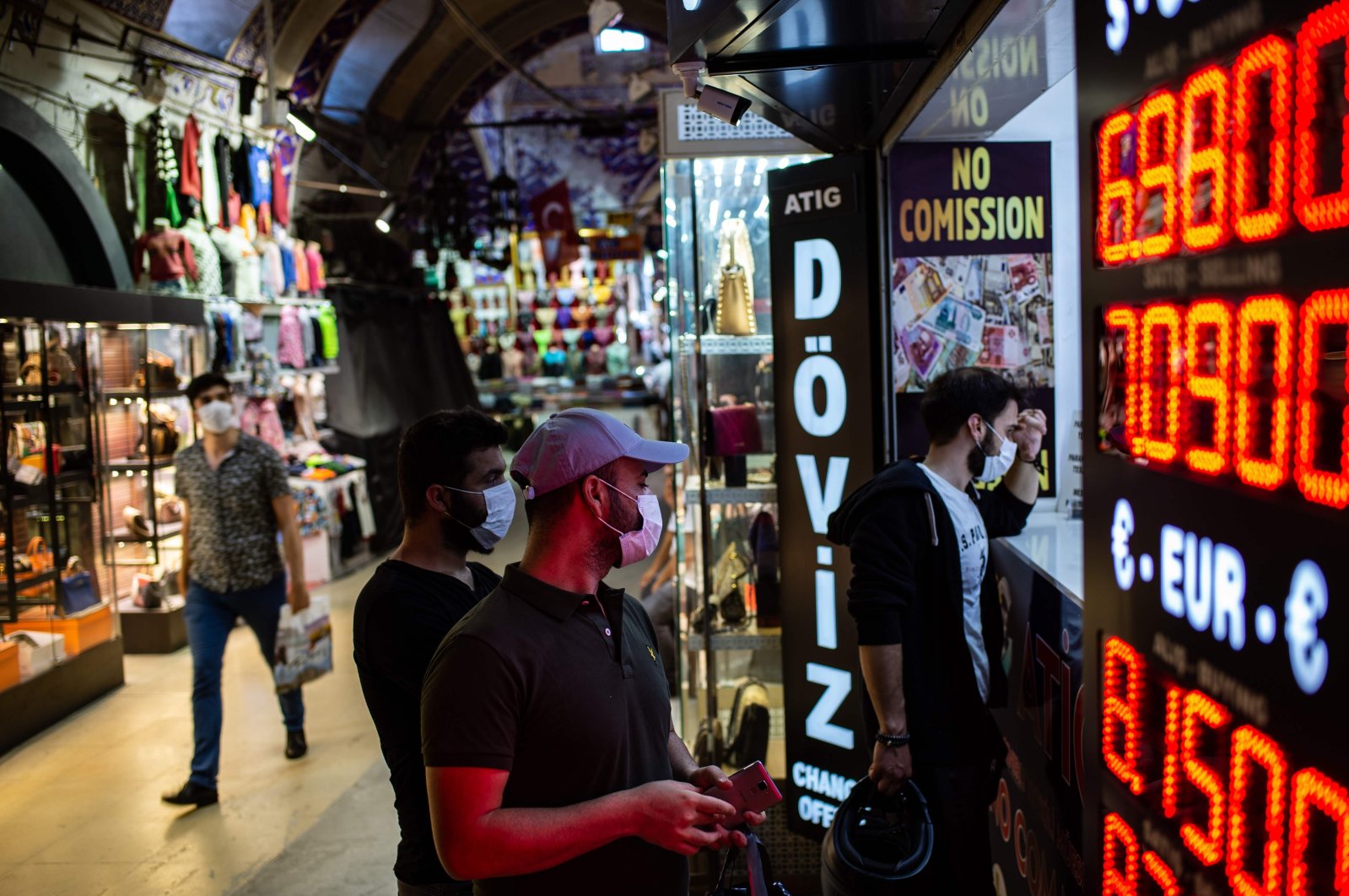 The recent fluctuations are specific not only to Turkey but to all other global economies as well, experts say, stressing that, once the currency stabilizes, the country would continue to attract investments with its sound structure

With heightened ambiguity on the long-term effects of the global health crisis brought by the coronavirus pandemic, world economies continue to suffer, while emerging markets, such as Turkey, are vulnerable to different variables. The excessive market volatility amid high fluctuations in exchange rates and the recent depreciation of the Turkish lira, however, are relatively short-term developments, and the country will recover from them, experts argue against the backdrop of positive macroeconomic indicators in the country.

“We are in a period of emerging market weakness right now. Turkey's currency has depreciated along with other emerging market currencies, actually faring better than Brazil and South Africa in 2020 and slightly worse than Mexico. This should have been expected. When global crises hit, emerging market currencies suffer,” Turkish economist Taha Meli Arvas said, noting that the important metric to watch is “how quickly these countries emerge from this crisis, one which is the worst since the Great Depression.”

“The Turkish economy is structurally strong, recent fluctuations in exchange rates are temporary and the Turkish lira will bounce back to the normal level depending on global developments,” Erdoğan also said during a press conference in front of the Hagia Sophia Grand Mosque in Istanbul. The president added that all other numbers indicate an upward trend and that despite some difficulties Turkey will maintain its strength during this challenging period of the pandemic.

The gross national income (GNI) was $236 billion (TL 1.7 trillion) in November 2002 when the ruling Justice and Development Party (AK Party) first took office while it had reached $754 billion by 2019, Erdoğan said. The per capita GNI has also increased.

The country’s employment was 19.6 million back in 2002 and has increased to around 28.8 million in 2019, Erdoğan stressed, noting that the country’s exports jumped from $36 billion to $180 billion in the same period. Employment and the export businesses were also a priority during the pandemic and started showing positive results of measures taken during that period, he added.

The Central Bank of the Republic of Turkey (CBRT) foreign exchange market reserves have reached $105 billion from 2002 figure of $27.5 billion, according to the figures announced by the president.

Since the beginning of the year, developing countries' currencies such as Brazil, Mexico, South Africa and Russia have experienced depreciation between 18% and 33%, and the depreciation in Turkish lira is at the level of 23%.

Foreign exchange and commodity markets specialist Kıvanç Alphan said that it is accurate to evaluate the recent depreciation of the lira in accordance with other developing markets.

The increasing number of COVID-19 cases in the U.S. weakens the U.S. dollar, Alphan said; however, while, in the past, similar weaknesses would have triggered fund flow to developing markets, “the case is now the exact opposite during the pandemic as the weakness of the U.S. dollar does not provide a fund flow to those markets but rather causes an outflow.

“Global economies are facing a very much different situation now that they have never experienced and the uncertainties on the growth of the developing countries are only accelerating the anxieties regarding those emerging markets, causing fund outflows,” he said, which delivers an upward pressure on the exchange rates.

Turkey has delivered a series of stimulus packages and taken various measures to curb the virus’ impact on the economy while preserving employment and keeping business activity on flow and encouraging growth.

Alphan said that those stimulus moves which were similarly undertaken by many developing countries can cause short-term upward mobility on exchange rates or on inflation; however, these moves are necessary. Similarly, many countries tried to keep their economies alive through an unprecedented monetary expansion as well as direct financial assistance.

Turkey, meanwhile, in the first quarter of 2020 posted a growth rate of 4.5 percentage points, by far the first among the European Union countries, G-20 countries and the Organisation for Economic Co-operation and Development (OECD) countries.

“Turkey has growth, despite its balance of payment issues, Turkey remains very attractive to investors precisely for this reason. When the currency stabilizes, Turkey will continue to attract investment and outperform its peers because it's structurally sound,” Taha Meli Arvas said.

Enver Erkan, an economist at Tera Yatırım, also said that a rapid recovery is observed in many economic activity indicators in the March- July period, beginning with the July normalization process.

He pointed out that the main contraction impact from COVID-19 is set to be seen in the data for the second quarter and that the increasing recovery momentum in the first data for July improves the expectations for the third quarter and beyond.

“However, the sustainability of the recovery will depend on ... whether the conditions for the virus worsen or whether the status quo can be maintained, in a worst-case scenario,” he added.

The headline Purchasing Managers’ Index (PMI) rose to 56.9 in July from 53.9 in June, recording its highest reading since February 2011, according to survey data from the Istanbul Chamber of Industry (ISO) and IHS Markit.

A broad reopening of the economy beginning on June 1 and a return of business for customers brought the second monthly rise in new orders among Turkish manufacturers. The expansion rate was among the fastest since the survey began in June 2005. New export orders also rose, albeit to a lesser extent than total new business.

The latest PMI survey data signaled the sector is strengthening after the pandemic brought a sharp downturn beginning in March. July saw jumps in expansion in both output and new orders, with capacity pressures emerging and firms taking on additional staff.

The rise in the PMI index followed an improvement in the economic confidence index and capacity utilization rate.

"This is a historic landmark, the highest level since February 2011," said Treasury and Finance Minister Berat Albayrak, evaluating the data.

"Thus, our positive expectations for the second half of the year are getting stronger," Albayrak said on Twitter Tuesday.

With July's value of 56.9, Turkey has left behind many countries such as China, the U.S., France and Italy.

“The PMIs announced on the European side also show that global economies have passed through a similar phase. Although the economic indicators are in a position to support a V-shaped recovery, its sustainability is also very much related to virus outbreak conditions and progress at this point” Erkan said.

The eurozone’s manufacturing PMI bounced to 51.8 in the month from June’s 47.4 – its first time above the 50 mark separating growth from contraction since January 2019.

Manufacturers in Germany, Europe’s largest economy, saw expansion for the first time since December 2018, and in France activity picked up a touch. The PMI for manufacturing, which accounts for about a fifth of the German economy, rose to 51 in July. The June reading was 45.2.

France’s PMI rose to 52.4 from 52.3 in June, the data showed. The Italian manufacturing activity hit its highest level since June 2018 as the PMI index climbed to 51.9 last month from 47.5 in June, climbing above the 50 mark for the first time since August 2018.

British manufacturing output grew at its fastest pace in nearly three years in July as its PMI rose to 53.3 in July from June’s 50.1.

As for the U.S., the Institute for Supply Management (ISM) said its index of national factory activity raced to a reading of 54.2 last month from 52.6 in June. That was the strongest since March 2019 and marked two straight months of expansion. Manufacturing accounts for 11% of the U.S. economy.

Manufacturing activity in China expanded at the fastest pace since January 2011 as domestic demand improved. The country’s Caixin/Markit Manufacturing PMI rose to 52.8 from June's 51.2, marking the sector’s third consecutive month of growth.

Turkey's exports in July have also reached the highest level of 2020 as they hit over $15 billion, Trade Minister Ruhsar Pekcan recently announced.

The figure rose 11.5% month-on-month, hitting the second-highest July figure of all times, Pekcan said in a statement.

She added that exports fell 5.8% compared with the same month of last year, driven by high base effect, fewer working days and the coronavirus pandemic.

According to the European Commission's 2020 Summer Economic Forecasts report, the EU, which is Turkey’s most important export market, is expected to shrink by 8.3% in 2020.

The U.S., which is also among the country’s important export markets, is expected to shrink by 6.6% this year, according to the International Monetary Fund (IMF).

According to the OECD scenario, in case of a possible second wave, total exports in the world are set to decrease by 11.2% and imports by 12.2%.

The scenario forecasts that the U.K. economy will experience a 14% contraction while the Russian economy will shrink by 10% and Germany by 8%.

Gold, on the other hand, is expected to maintain its relentless rally as it secures its place under the spotlight as prices hit a record around $2,044 per ounce most recently on Wednesday.

The precious metal, which has soared more than 30% this year, is benefiting from heightened uncertainty and the super-low interest rates.

Weakness in the dollar, which fell back toward recent two-year lows and falling U.S. yields have encouraged investors to look for an alternative store of value, boosting the appeal of gold.

“Gold is always a safe haven,” Alphan said, and also the physical demand for gold has dropped, “due to investors buying gold as a financial instrument, we cannot see a decrease in gold prices.” They are not likely to drop soon with the enormous monetary expansion and new stimulus talks in the U.S., he said.

The physical demand for gold in the world’s most gold-buying countries, namely China and India, has dropped by 50% and between 60% and 64% in India, respectively.

Erkan similarly said that the possible risks of a second wave of the coronavirus, the downward trend in interest rates, the increasing geopolitical risks and the expectation of new incentives to support the economy cause the continuation of the rally in gold prices.

“We expect fiscal spending to continue, extreme expansionary monetary policies to continue and as the Fed pointed out, the challenges of recovery will continue,” he said, noting that the global gold rally inevitably causes an increase in Turkish lira-based gold prices as well.