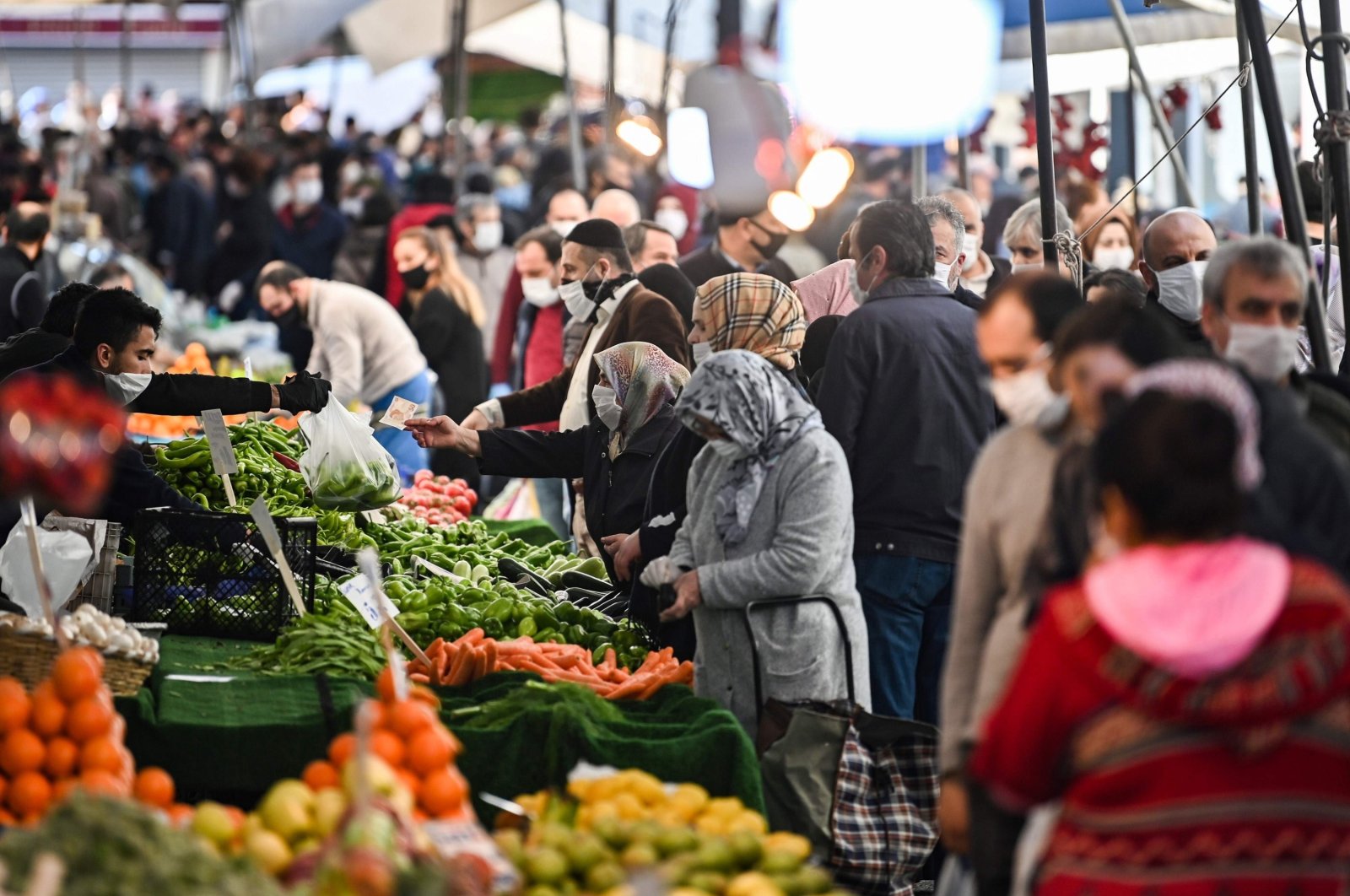 People wearing masks do their grocery shopping at a market in Bayrampaşa, Istanbul, Turkey, April 17, 2020. (AFP Photo)
by DAILY SABAH WITH AGENCIES Feb 03, 2021 10:00 am
RECOMMENDED

Turkey’s annual inflation rate climbed more than expected to 14.97% in January, data showed Wednesday, driven by energy prices. The rise will keep the pressure on the central bank to maintain tight policy even after sharp interest-rate hikes.

“Inflation figures show we are far from the target. We will never compromise on our measures to achieve the goal,” tweeted Treasury and Finance Minister Lütfi Elvan.

“We will act through consultation mechanisms involving all parties. Quality, sustainable growth is not possible without price stability,” Elvan said.

Both annual and monthly increases came above expectations. A Reuters poll forecast was for an annual rise to 14.68% and a monthly increase of 1.4%. Economists polled by Anadolu Agency (AA) last Friday projected the rate to be 14.75%.

Turkish inflation has been stuck in double-digits for most of the last three years and stood at 14.6% in December.

The January reading furthered the case for tight monetary policy, which the central bank has vowed to maintain until inflation falls within its target range.

Having repeatedly said it would take a stronger approach to tackling inflation under its new governor, Naci Ağbal, the Central Bank of the Republic of Turkey (CBRT) has hiked its key interest rate to 17% from 10.25% since November.

Last week, Ağbal reaffirmed a commitment to tight policy even if more “front-loaded” steps are needed, and he stood by the forecast that inflation would drop below 10% by year-end.

In a letter to the government Tuesday, the bank said a tight and cautious monetary policy stance should be maintained resolutely until 2023.

It said that if any new information points to the risk of inflation expectations and pricing behavior diverging from the medium-term target path, “additional front-loaded and decisive tightening will be implemented.”

The Turkish lira rose on Wednesday as inflation reinforced bets of tight policy, while the recent rally among most other emerging market stocks and currencies appeared to have cooled.

The lira rose 0.6% to the dollar, staying near five-month highs. It remains one of the best performing emerging market (EM) currencies this year, trading up about 3.8%.

Electricity, gas and oil prices lifted the overall price index (CPI) last month, with transportation inflation up more than 21% from a year earlier. Food prices have hit citizens particularly hard and rose another 2.5% in a month and more than 18% in a year.

Presenting the first inflation report of the year last week, Ağbal noted that rises in food prices were an important risk to overall inflation in 2021.

President Recep Tayyip Erdoğan recently expressed his frustration with what he said were major differences in food prices and warned that tradespeople could face heavy fines if they keep charging unjustifiably high prices.

Erdoğan on Monday stressed that the rise in food prices is the “greatest threat” to both producers and consumers.

The president instructed officials to investigate increases in food prices, saying that the Turkish people should not be expected to endure high inflation and high interest rates.

To date, some 495 firms that have been found to have been charging exorbitant prices for basic goods and food have been fined TL 15.48 million by the Unfair Price Assessment Board, consisting of government officials and private sector representatives.

The producer price index rose 2.66% month-on-month in January for an annual rise of 26.16%, the data showed.

The statistics institute said items such as protective masks were added to the CPI basket in 2021, given the coronavirus pandemic.

It also raised the weighting of the food and nonalcoholic beverages group and lowered that of restaurants and hotels.