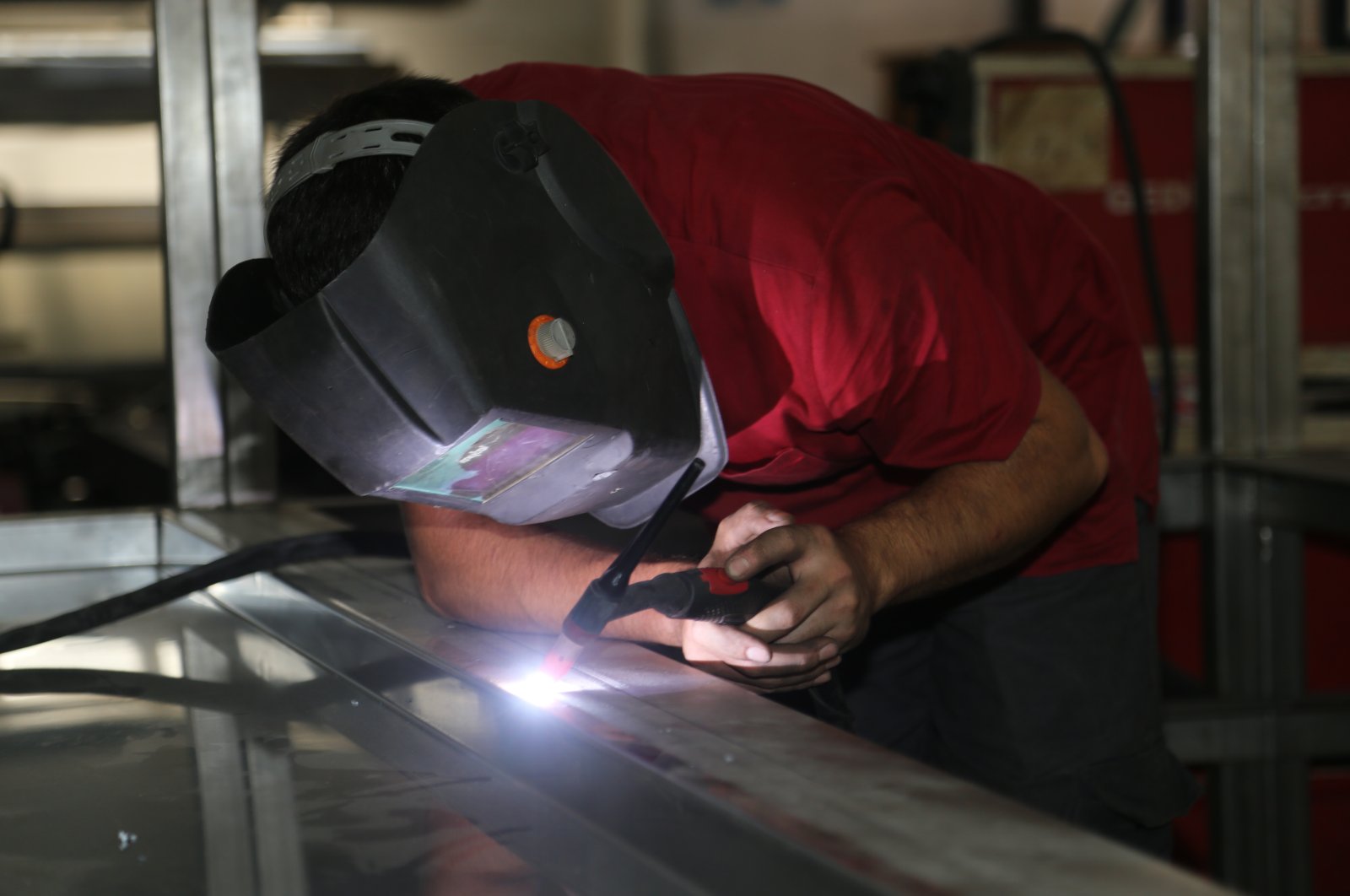 A worker is seen at a firm operating in the Organized Industrial Zone in the northern province of Ordu, northern Turkey, July 20, 2020. (AA Photo)
by DAILY SABAH WITH AGENCIES Aug 04, 2020 10:50 am

The July PMI data for manufacturing signaled the sector is strengthening after the pandemic brought a sharp downturn beginning in March. The month saw sharp rates of expansion in both output and new orders

Turkish manufacturing activity grew in July at the fastest rate in nine years as the country eased its coronavirus measures, a survey showed Tuesday.

The headline Purchasing Managers’ Index (PMI) rose to 56.9 in July from 53.9 in June, recording its highest reading since February 2011, according to survey data from the Istanbul Chamber of Industry (ISO) and IHS Markit.

"This is a historic landmark: the highest level since February 2011," said Treasury and Finance Minister Berat Albayrak, evaluating the data.

"Thus, our positive expectations for the second half of the year are getting stronger," Albayrak said on Twitter.

A broad reopening of the economy beginning on June 1 and a return of business for customers brought the second monthly rise in new orders among Turkish manufacturers. The expansion rate was among the fastest since the survey began in June 2005.

The latest PMI survey data signaled the sector is strengthening after the pandemic brought a sharp downturn beginning in March. July saw jumps in expansion in both output and new orders, with capacity pressures emerging and firms taking on additional staff.

The rise in the PMI index followed an improvement in economic confidence index and capacity utilization rate, Varank wrote on Twitter.

"We have decoupled positively from many countries by seeing the highest level in the index since February 2011," the minister said. "Expectations are positive on the production front."

"The growth will help to claw back some of the output lost during the downturn, but will have to be sustained for a longer period for a full recovery to be secured," said Andrew Harker, Economics Director at IHS Markit.

The headline Istanbul Chamber of Industry Turkey Manufacturing PMI is a composite single-figure indicator of manufacturing performance. It is derived from indicators for new orders, output, employment, suppliers’ delivery times and stocks of purchases. Any figure greater than 50.0 indicates an overall improvement of the sector.

With July's value of 56.9, Turkey has left behind many countries such as China, the U.S., France and Italy.

The eurozone’s manufacturing PMI bounced to 51.8 in the month from June’s 47.4 – its first time above the 50 mark separating growth from contraction since January 2019.

Manufacturers in Germany, Europe’s largest economy, saw expansion for the first time since December 2018 and in France activity picked up a touch. The PMI for manufacturing, which accounts for about a fifth of the German economy, rose to 51.0 in July. The June reading was 45.2.

France’s PMI rose to 52.4 from 52.3 in June, the data showed. The Italian manufacturing activity hit its highest level since June 2018 as the PMI index climbed to 51.9 last month from 47.5 in June, climbing above the 50 mark for the first time since August 2018.

British manufacturing output grew at its fastest pace in nearly three years in July as its PMI rose to 53.3 in July from June’s 50.1.

As for the U.S., the Institute for Supply Management (ISM) said its index of national factory activity raced to a reading of 54.2 last month from 52.6 in June. That was the strongest since March 2019 and marked two straight months of expansion. Manufacturing accounts for 11% of the U.S. economy.

Manufacturing activity in China expanded at the fastest pace since January 2011 as domestic demand improved. The country’s Caixin/Markit Manufacturing PMI rose to 52.8 from June's 51.2, marking the sector’s third consecutive month of growth.

But worries about a second wave of COVID-19 infections may weigh on global demand and business sentiment, keeping any rebound in factory output feeble.

Over 18 million people have been infected by the coronavirus and the hit from lockdowns and social distancing policies to contain its spread have had a devastating impact on global growth and pushed many economies into recession.

With still-rising coronavirus infections – and the risk of renewed lockdowns increasing – the chances of any rebound reversing course have risen and the world economic outlook has dimmed again.

The lira rose as much as 0.7% to the dollar after the data. Turkish stocks led gains in EMEA, adding more than 1% as they resumed trade after a long weekend.

Russia's ruble fell about 1% to the dollar, while stocks were weighed down by losses in major energy firms.

Central European currencies, such as the Hungarian forint and the Polish zloty, also rose against the euro.

Polish manufacturing recovered in July after a coronavirus lockdown was eased, a survey showed on Monday, but Hungary posted a more modest improvement and the Czech Republic did not return to growth, suggesting the region still faces challenges.

Stocks in the region traded slightly higher for the day.

Emerging market risk assets had marked strong gains in July, amid improving economic data and hopes for a coronavirus vaccine. But they are yet to reach pre-pandemic levels.

For instance, the MSCI's index of developing world stocks, which rose about 1%, was about 5% off a peak hit in January.