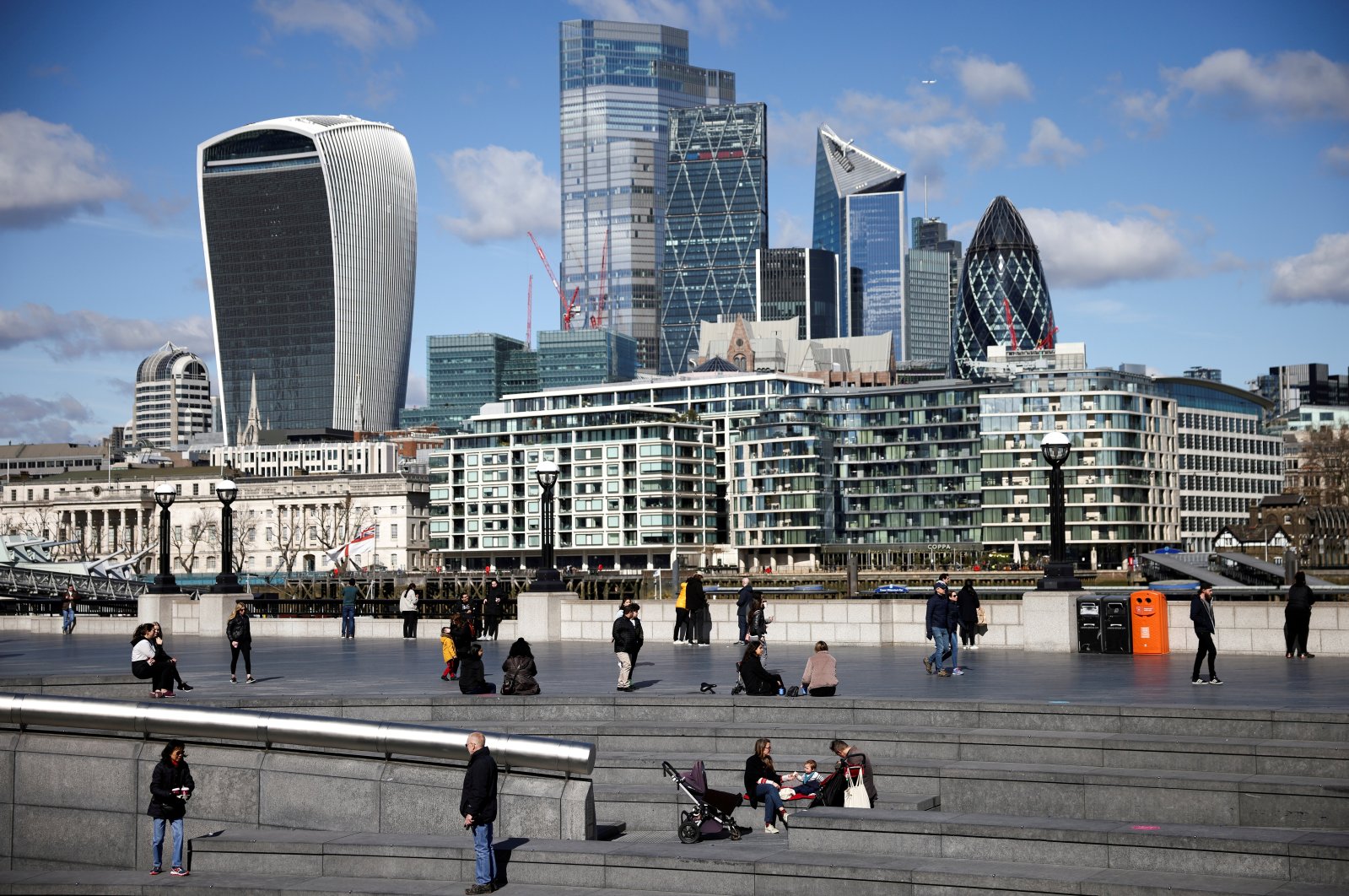 People walk along the south side of the River Thames with the City of London financial district in the background, amid the coronavirus disease (COVID-19) outbreak in London, Britain, March 19, 2021. (Reuters Photo)
by REUTERS Apr 13, 2021 4:56 pm
RECOMMENDED

Britain’s economy grew 0.4% in February, recovering from a substantial drop the previous month, according to official data, as the country prepared to emerge from its third national lockdown.

The most recent easing of pandemic restrictions coupled with the fast rollout of COVID-19 vaccines has raised the prospect of a bounce-back this year and in 2022.

Economists polled by Reuters had expected growth of 0.6%. However, the data also showed that the fall in the gross domestic product (GDP) in January was not as severe as previously estimated, down by 2.2% compared with the initial reading of a 2.9% drop.

Britain’s economy shrank by almost 10% last year, its biggest slump in more than three centuries and a more severe fall than in most European economies, as the country was battered by coronavirus pandemic measures.

Tuesday’s data showed GDP remained 7.8% below its level a year earlier, shortly before the pandemic swept Europe, and was 3.1% lower than its level in October, before the two latest lockdowns hammered Britain’s huge services sector.

Nonessential shops and outdoor hospitality venues reopened on Monday and Prime Minister Boris Johnson hopes to relax most coronavirus restrictions before the end of June.

“While the U.K. is still on course for a modest contraction in GDP in the first quarter, investors are increasingly looking towards the forthcoming rebound in economic growth rather than dwelling on the negative quarterly figure,” Dean Turner, an economist at UBS Global Wealth Management, said.

Growth in February was helped by a first rise in factory output since November, led by car manufacturing after two months of contraction when the industry struggled with a global shortage of microchips.

Wholesalers and retailers saw a pick-up in sales which helped the services sector to grow by 0.2%.

There were signs that trade between Britain and the European Union partially recovered in February after a hit in January, the first month of a new post-Brexit trade relationship.

Trade volumes between Britain and the European Union rose in late 2020 as businesses stockpiled goods in anticipation of border delays in 2021.

“Despite the evidence of partial recovery from the substantial January falls in some commodities, it is still too soon to determine to what extent the monthly changes in trade for January and February can be directly attributed to the end of the transition period,” the Office for National Statistics said.