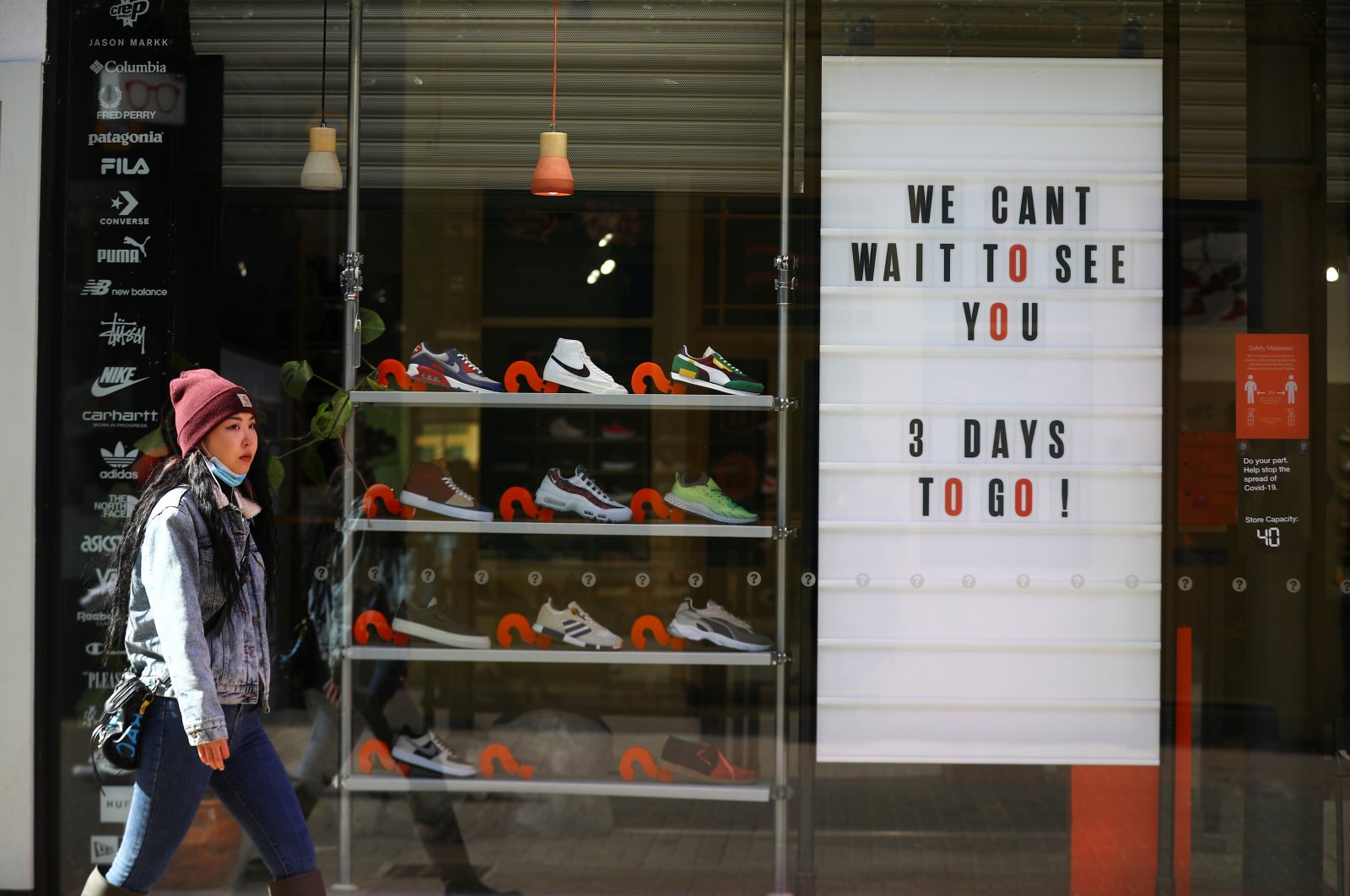 A pedestrian walks by a store being prepared for the reopening, as the coronavirus lockdown restrictions begin to ease, in London, Britain, April 9, 2021. (Reuters Photo)
by Agencies Apr 11, 2021 12:35 pm
RECOMMENDED

Nonessential stores in the United Kingdom are set to reopen Monday amid a slow but steady march out of a three-month closure, hoping that the escape from lockdown will fuel a trading boom.

Four weeks after the U.K. took its first step out of lockdown by reopening schools, Prime Minister Boris Johnson last week confirmed that businesses including hairdressers, beauty salons, gyms, nonessential shops and bar and restaurant patios would be allowed to reopen as of this week.

But with more than half of the U.K.’s adult population having received at least one of the vaccine’s two doses, analysts do not think shoppers will hold back.

Market researcher Kantar is forecasting that consumers will spend 3.9 billion pounds on the high street in the first week of reopening.

“There was definitely a bounce at the end of the lockdown last year (in June), I would be surprised if the same thing didn’t happen again,” Simon Wolfson, CEO of fashion retailer Next, told Reuters.

Many shopping areas will look very different from their pre-pandemic state. A raft of chains – including fashion retailers Topshop, Topman, Burton, Oasis and Laura Ashley – that had been fixtures for decades, will not be there as they become high-profile casualties of a crisis that has hammered the sector.

Eight John Lewis department stores will not reopen and Debenhams stores will only reopen to hold final closing sales.

England’s nonessential stores have been closed since Jan. 4 when Johnson imposed a third lockdown to stem a surge in COVID-19 cases.

Nonessential retail will also reopen in Wales on Monday, though Scotland’s shops will have to wait until at least April 26. Northern Ireland does not have a date yet.

Getting shoppers spending again is key to Britain’s recovery after official data last month showed that 2020 was the worst year for its economy in more than three centuries.

Analysts reckon the customer bounce-back could be more pronounced than the one last June.

“Lockdowns clearly improve the average family P&L, and many will be thinking that they won’t be going on an overseas holiday this year. Shoppers have money to spend, and most people haven’t shopped fashion for nearly two years,” said analysts at Peel Hunt.

While Greggs stores were allowed to trade through the latest lockdown, he is hoping for a boost to high street footfall from the relaxation in restrictions.

“There’ll be queues outside the shops that people can’t access easily online, so Primark’s a good example,” he said.

To help the sector cope with the challenge of social distancing regulations, which are scheduled to remain in place until June 21, the government is allowing extended opening hours. It said last month that shops can open until 10 p.m. from Monday to Saturday.

Britain has recorded around 127,000 coronavirus deaths, the highest toll in Europe. But infections and deaths both have fallen sharply during the last lockdown and since the start of a vaccination campaign that has given a first dose to more than 31 million people, or six in 10 adults.

The government aims to give all adults at least one shot of vaccine by July and hopes that a combination of vaccination and mass testing will allow indoor socializing and large-scale events to return.