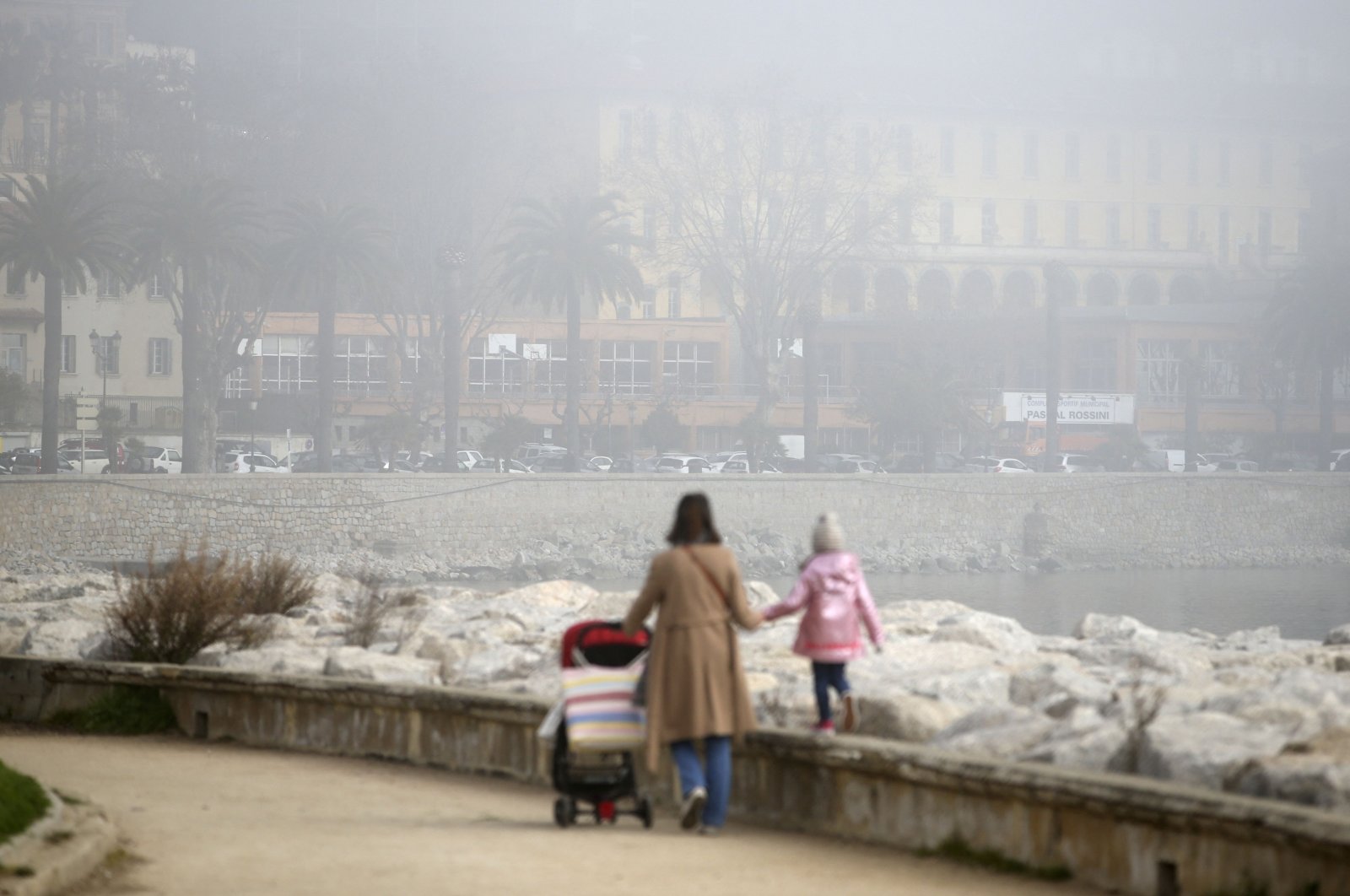 A woman walks with her child at the Miot square as heavy smog and pollution envelopes the capital Ajaccio on the French Mediterranean island of Corsica on Feb. 25, 2021. (AFP Photo)
by French Press Agency - AFP
Mar 02, 2021 12:11 pm

One of the few positive outcomes of the COVID-19 pandemic that halted transportation and factory activity, at least for a period of time around the world, was the clean air. Footage comparing air pollution before and during the pandemic has been gaining traction for some time, showcasing the improvements even the world's most polluted regions were able to make when the world stood still.

However, despite developments, global CO2 emissions have returned to pre-pandemic levels as the world economies go through the process of reopening, threatening to put climate treaty targets for capping global warming out of reach, the International Energy Agency (IEA) said Tuesday.

Energy-related emissions were 2% higher in December 2020 than in the same month a year earlier, driven by economic recovery and a lack of clean energy policies, the IEA said in a report.

"The rebound in global carbon emissions toward the end of last year is a stark warning that not enough is being done to accelerate clean energy transitions worldwide," IEA executive director Fatih Birol said in a statement.

"If governments don't move quickly with the right energy policies, this could put at risk the world's historic opportunity to make 2019 the definitive peak in global emissions."

A year ago, the intergovernmental agency called on governments to put clean energy at the heart of economic stimulus plans, but the appeal appears to have fallen on deaf ears for the most part.

"Our numbers show we are returning to carbon-intensive business-as-usual," Birol said.

In China, carbon pollution last year exceeded 2019 levels by more than half a percent despite a draconian, though brief, lockdown to halt the virus' spread.

China – which accounts for more than a quarter of global CO2 output – was the only major economy to grow in 2020.

In India, they rose above 2019 levels from September as economic activity increased and COVID-19 restrictions relaxed.

The rebound of road transport in Brazil from May drove a recovery in oil demand, while increases in gas demand toward the end of 2020 pushed emissions above 2019 levels in the final quarter.

U.S. emissions fell by 10% in 2020, but by December were approaching levels from the year before.

"If current expectations for a global economic rebound this year are confirmed - and in the absence of major policy changes in the world's largest economies - global emissions are likely to increase in 2021," Birol said.

A sharp surge in economic activity – and the pollution that comes with it – is more the norm than the exception after an economic downturn.

Annual GDP growth and CO2 emissions, for example, both spiked after the Great Recession of 2008.

But as pressure builds to tackle the climate crisis, there are encouraging signs that major emitters are taking steps to decouple economic growth from planet-warming carbon emissions, Birol noted.

China's surprise commitment to become carbon neutral by 2060, the Biden administration's ambitious climate agenda along with the U.S. reentry into the Paris Agreement, and the European Union's Green New Deal all point in the right direction, he said.

"India's stunning success with renewables could transform its energy future," he added.

More than half of that decline was due to lower use of fuel for road transport and aviation.

The 2015 Paris Agreement enjoins nations to cap the rise in global temperatures "well below" two degrees Celsius (35.6 degrees Fahrenheit) compared with pre-industrial levels, and to strive for a ceiling of 1.5 degrees Celsius if possible.

Earth's surface is already 1.1C warmer on average, enough to increase the frequency and intensity of deadly heatwaves, droughts and superstorms made more destructive by rising seas.

In May, the IEA is to publish its first global road map on how the energy sector can reach net-zero by 2050.