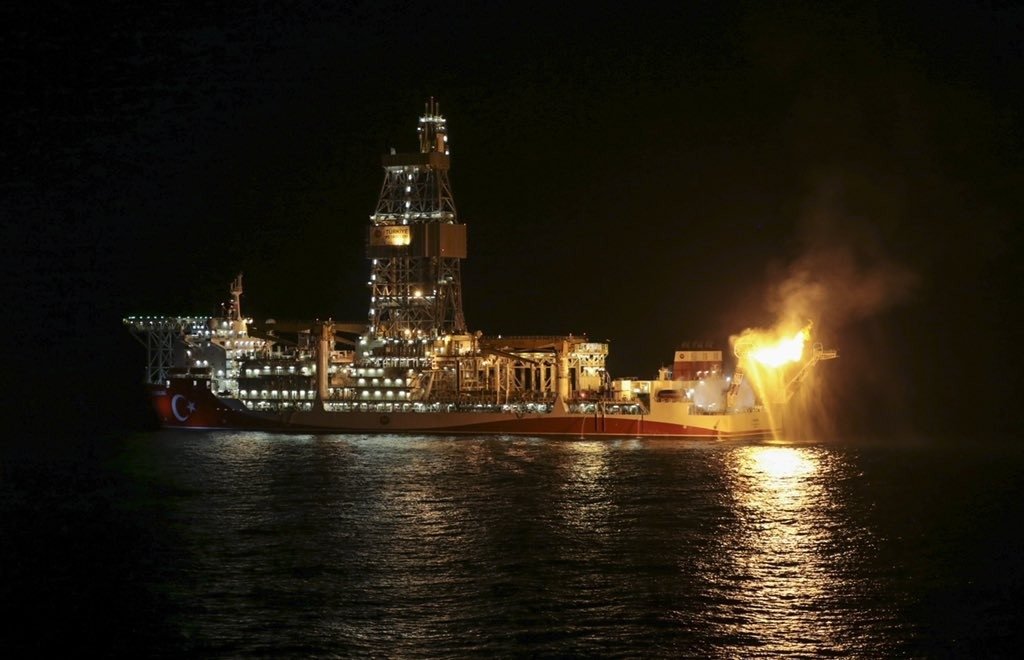 In the latest milestone, Turkey on Wednesday lit the first gas flare in the Black Sea field where it has discovered more than half a trillion cubic meters of natural gas since August last year.

The nation in June announced it discovered 135 billion cubic meters (bcm) of additional natural gas in the Amasra-1 borehole in the northern Sakarya field, raising the total discovery in the region to 540 bcm.

Last year, the Fatih drillship discovered 405 bcm of natural gas some 170 kilometers (about 106 miles) off the Black Sea, in the country’s biggest discovery.

“Today, for the first time, we will burn off the Black Sea gas that we discovered and started to extract from hundreds of meters underground,” President Recep Tayyip Erdoğan told a virtual ceremony to mark the occasion.

“With the introduction of Black Sea gas in the near future, we will significantly reduce our dependence on foreign sources,” Erdoğan said.

Ankara aims to start pumping the gas from the Sakarya field to its main grid in 2023, with sustained plateau production starting in 2027 or 2028.

The wells Turkey drilled for natural gas in the Black Sea “are not the first, and of course, they will not be the last,” Erdoğan said.

“Previously, we used to carry out drillings with international companies via leasing. Now, unlike the previous ones, we also carry out this work with our own ships and our own human resources,” he added.

Ankara has so far insisted it will develop the gas field on its own and has been cool to foreign corporate interest.

Erdoğan stressed Turkey has ended its foreign dependency thanks to its technical competence, as demonstrated by the drilling.

A seabed pipeline stretching around 169 kilometers is scheduled to be constructed in 2022 to connect the wells in the region to the main grid, Energy and Natural Resources Minister Fatih Dönmez said, addressing the ceremony he attended onboard the Fatih drillship.

Reiterating that Black Sea gas will be transported to the mainland in three phases, Dönmez noted that the first phase of designing the seabed natural gas production systems has been completed.

“In 2022, we will be laying 169 kilometers of seabed pipeline,” he noted, adding that all the phases are progressing in an integrated and coherent manner.

As part of the second phase, the minister explained that the foundation of an onshore natural gas processing facility at the Filyos port in northern Black Sea province of Zonguldak was laid one and a half months ago.

He stated that the third phase will include the construction of pipelines that will connect those two units together.

The well flow tests are being conducted by another drilling vessel, Kanuni. The ship is carrying out completion operations at the well.

“This is a milestone for Turkey,” said Melih Han Bilgin, TPAO chairperson and CEO. “The flow rates, indicating commercially viable gas in the Sakarya Basin, imply new opportunities for TPAO.”

The flow test provides data on the flow rate and the pressure of the natural gas to be extracted from the reservoirs, based upon which the economic production potential is calculated.

The data and samples acquired from the flow test will be used to further optimize the field development work and to refine the front-end engineering and design (FEED), which will be concluded shortly after the well tests, TPAO said in a statement.

Five deep-sea drillings have been completed within one year in the Black Sea at the Sakarya field, Dönmez said, adding that Fatih drillship completed its operations at Türkali-1, Türkali-2 and Türkali-3 exploration wells while Kanuni started well completion operations in Türkali-2 last month.

“We confirmed the amount of natural gas that we discovered at the exploration wells. We analyzed 140 gas and water samples in five wells. We finalized fluid property, pressure and temperature measurements with 1,090 mini-tests in order to examine reservoir conditions,” Dönmez noted.

As the work to bring the Black Sea gas ashore continues, Turkey’s seismic activities are also pushing ahead, the minister added.

“We completed 11,000 square kilometers of three-dimensional seismic exploration at Sakarya Gas Field and proceeded to the interpretation stage. Hopefully, this data will be the harbinger of good news,” he said.

Dönmez previously said the maximum annual production from the field could range between 15 bcm and 20 bcm, corresponding to around 30% of the country’s yearly gas consumption.

The gas discovery could alleviate much of the nation’s gas import dependence, 48 bcm of which mainly comes from Russia, Azerbaijan and Iran via pipelines along with liquefied natural gas (LNG) from several countries, including Nigeria, Algeria and the U.S.